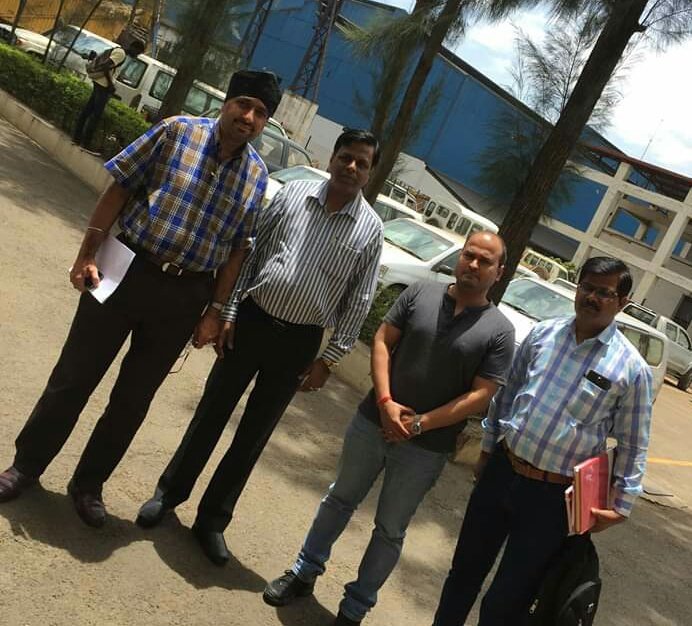 Kibos Sugar Company is once again in the light following accusations that the firm was donkey responsible for the outbreak of Covid-19 Delta variant in Kisumu.

National Assembly’s Health committee now wants government health institutions to investigate how the COVID-19 Delta variant got into the country.

This follows accusations by the health ministry that the variant was brought in by Kibos sugar company workers who returned to the country from India.

MPs held hearings on a petition filed by a Muhoroni resident, who wants the sugar company to take full responsibility for the spread of the variant in western Kenya.

The health committee has been sitting in Kisumu County questioning various government departments over the matter.

According to statistics from the health ministry, the first patient to test positive for the variant works in the factory.

Deputy Director of Immigration in charge of Nyanza region Tom Anyim told the MPs the workers who came into the country through Jomo Kenyatta International Airport (JKIA) were subjected to all the ministry of health Covid-19 protocols before being allowed in.

It has been questioned why the workers were allowed into the country without observing the protocols while at the time the variant was tearing up India and on full international capture. Immigration officials are being accused of overlooking the safety measures after being pocketed.

According to the immigration officer, the Indians travelled to the country between September 15, 2020 and March 4, 2021.

The officer was also hard-pressed to explain why the expatriates from India were doing duties that could as well be carried out by the locals.

He said 25 foreigners from India were issued with permits to work at Kibos in accounts, ICT, engineers and quality control sections.

He said those who were allowed entry were coming for short-term assignments, which included plant installation and equipment maintenance at Kibos.

“There are those who were to install a new fertilizer plant at Kibos while the others were workers of Ayoki company, which is contracted by the sugar miller to do short-time assignments such as maintenance of plants and equipment and installation of equipment,” he said.

The softening explanation meant to clean up the company of any blame is sharply opposed by the petitioner.

Vihiga Woman Representative Beatrice Adagala questioned why the department gave permits to people who did not possess any special skills at the expense of unemployed but qualified Kenyans.

“Kenyans are looking for jobs while you let people with skills that are available to come and work here,” she said.

“These are not specialised skills. That expertise is available in the country, so allowing them to work here goes to denying our people jobs,” Adagala said.

She said Kenyans have eyes on the immigration department to help control the borders and keep Kenyans safe, a mandate which she claimed the department ignored.

“It is very sad when you talk of accountants being imported to work here. Why would you ship in people from India, who in turn infected our people? You put Kenyans at risk and you must be held accountable. The region has suffered because of your negligence,” Adagala said.

Charles Ochieng Atyang’, who presented the petition on behalf of 91 residents of Miwani accused Kibos and the Immigration department of illegally bringing in workers of Asian origin from India leading to the massive spread of the Delta variant in the area.

Kibos Sugar and Allied Industries have been accused by locals of smuggling in foreigners to work in the firms taking away the jobs that could easily be done by locals. They’re now asking the government to conduct an audit of the ‘expatriates’ employed in the firm to a certain their claims that most are unqualified without any skills to match the locals.

Kibos has had a rough time with the community in the recent past and this is largely attributed to their lack of adherence to environmental protection. Kibos has also been accused of taking advantage of their financial muscles and being one of the few industries employing locals to threaten authorities into overlooking their destruction to the environment.

Having been accused of releasing the affluent from the factory into River Kibos ending up in polluting Lake Victoria, Kibos threatened the county government and Nema with exiting the Kenyan market. A professional blackmail that worked since employment they offer would cease.

At some point, Kibos sugar company and Allied Industries Ltd was shut down by NEMA over non-compliance in one of many illegal activities done by the family.  Kibos had been emitting 245 micrometres of pollutants, five times more than the national standards. Kibos failed to adhere to emission reduction measures as set out in part (IV) of the 5tg schedule of the Air Quality Regulation 2014.  With this contempt, The National Environment Management Authority (NEMA) ordered for the immediate closure of Kibos Sugar and Allied industries for failing to comply with air quality regulations last year 2020. The authority undertook an ambient air quality monitoring from December 17-21, 2019.

Because of the serious environmental and health risk posed by the emission of particulate matter, the Authority considered that the c boiler operations contravened Article 42 of the Constitution which guarantees everyone a right to clean and healthy environment. The firm had been given the firm 30 days to install an effective air pollution control system at the boiler and provide its performance levels to Nema.

Kibos Sugar Company Ltd has managed to infiltrate, bribe and buy the silence of surrounding Luo leaders who now can’t raise a voice on the health hazards the locals are exposed to by the company thereby leaving them for the dead. The management thrives in impunity.

In our previous article, Kenya Insights revealed how  illegal Asian Immigrants have infiltrated the Asian companies in Kenya whose owners have managed to pocket the mandated authorities to keep off. Locals have complained now and again on the encroachment of basic jobs of which smuggled Asian nationalities have occupied.

Kibos sugar company owned by one of the Asian families is one of the many examples of failed Immigration mission to honour their allegiance to protecting the security of the country at all cost. According to our source, the jobs specifications for the alien workers in the company include security, supervisors in boilers, electrical mechanics, boiler operators, welders, fitters, timekeeper clerks and store men.

Their salaries according to oranges from Kshs 40,000 to Kshs 105,000 whilst the highest paid local employee earns about Kshs 45,000 p.m whom is boiler engineer. Not forgetting that these foreign workers are not subjected to statutory reductions such as for the NSSF and NHIF.

At some point in 2019, Immigration department attempted to enforce stringent immigration-related requirements and rules to protect the local labour market and ensure compliance with the immigration laws.

The Department of Immigration announced that it increased its scrutiny of applications for long and short-term work permits.

The sense of ownership and double standards the Chatthe family enjoys is beyond a normal citizen’s imagination. Kibos Sugar and Miwani factories have employed hundreds of undocumented Asians and the authorities are aware but maim on the matter as they are under the payslip of the barons.

These Asian aliens are said to be smuggled inn masquerading as missionaries, clergymen etc.

The Chatthe’s, who co-own Kibos Sugar factory, have destroyed the sugar industry in Kenya through the importation of toxic sugar, illegal dealings, killings on drunk driving and getting away with murder with the help of the authorities. 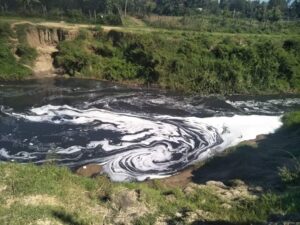 Besides air pollution, they were also on the radar for water pollution as the factory’s ethanol distillery has poor waste disposalpolluting the two rivers with dangerous chemical waste. The High Court in Kisumu on October 31 revoked the license of Kibos Sugar & Allied Industries Ltd (KSAIL) and shut down all its five factories after the Killer directors ignored NEMA warning and continued to pollute river Awach which leads to Lake Victoria. 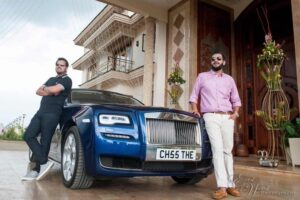 Kibos Sugar factory was founded by Patriarch Sardar Channan Singh Chatthe who ran the Chatteh Group of Companies and trustee of Kibos Sugar and Allied Industries LTD(KSAIL) he fried in January. Company is currently run by Mr. Sukhwinder Singh Chatthe — one of whose flamboyant sons (Simi Chatthe) whom is deemed to have been behind the company car’s wheel one fateful night when the official company’s car hit 3 people ( Meshak Ouma (37), George Oudi (28) and Martin Bonyo (25) who died on spot. This happened at around 9 pm in July, 2020 last year. 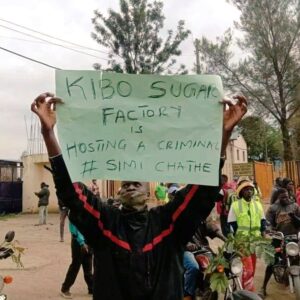 Protesters storm Kibos Sugar factory in Kisumu after three people were ran over & killed in an accident allegedly involving the company car on Saturday night pic.twitter.com/vOoCaTz5At

In 2018, the Director of Public Prosecutions Noordin Haji ordered the prosecution of Mr Chatthe, Crossley Holdings and seven other suspects for conspiracy to fraudulently transfer the land between 2007 and 2008. Crossley, through a law suit, claimed to have acquired the land through an auction in 2007 and wanted the court to issue eviction order to the current occupants. 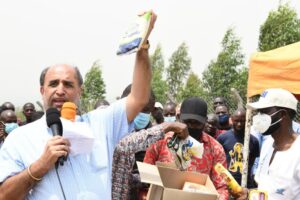 The company, which was represented by Mr James Orengo, claimed the parcel of land registered as LR No 7545/3 was then occupied partly by trespassers and illegal settlers.

Taking advantage of their acquaintance with the DP Ruto who is the defiant face of impunity in government, this family like Mr.Jayesh, Rai family are taking advantage of Kenya’s weakest link -Corruption to have the guts. 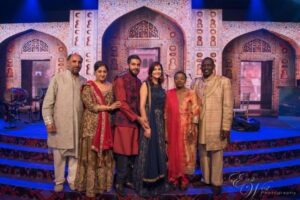 DP Ruto at the furthest end (Right) with the Chatthe family.

April 2021, another horrible incident happened in the company. Maurice Ongonyo, a bell tractor operator died on Thursday at the Kibos Sugar factory paper mill section after falling a moving conveyor belt, reports say. The incident that happened 1.30am would later turn out to be a case of an overworked, not motivate and underpaid employee incident.

With relevant authorities charged with safeguarding environment having failed to discharge their mandate to stop ‘the rot’ going on in River Kibos, regional lobby groups have been urging residents of the Lakeside County and its environs to boycott sugar from Kibos Sugar factory.

Kenya Insights allows guest blogging, if you want to be published on Kenya’s most authoritative and accurate blog, have an expose, news TIPS, story angles, human interest stories, drop us an email on [email protected] or via Telegram
Related Topics:Chatthe familyKibos SugarNEMASardar Channan Singh ChattheSimi ChattheSukhwinder Singh Chatthe
Up Next

Blacklisted 1XBet Russian Mafias Sneak Back Into The Country