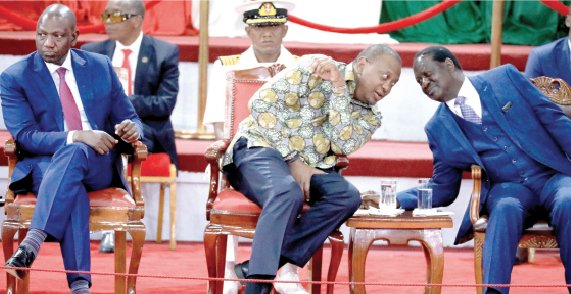 It all began with the first shot being the impeachment of former Kiambu Governor Ferdinand Waititu, who was aligned to the DP’s camp.

The senate which was holed in a 2-day plenary sitting deliberating the matter voted on three charges he had been accused of: Gross Violation of the Constitution & Public Finance Management Act, Crimes Under the National Law and Gross Misconduct/Abuse of Office.

The first count was supported by 27 senators while the second and third received support from 28.

Only a simple majority of 24 Senators was required to vote in support of the motion for it to pass.

On the D-Day, both camps were bragging to have the numbers within Jubilee stable. But it turned out the side leaning to the president had an extra hidden card in a deal with the opposition, thanks to the handshake.

The next contest of numbers came previously when the President’s side finally effected changes in the Jubilee leadership against spirited opposition from the DP’s camp.

When names in the new line-up of the party’s management committee were handed to the Registrar of Political Parties three weeks before, the DP mobilised his troops to petition the registrar not to effect the changes which he termed “fraudulent”. A temporary victory he won.

And to justify the short lived victory he (DP) said in a tweet that 146 Jubilee MPs from both Houses (National Assembly and Senate), or about 70 per cent of the total in the party ranks, had sent objections to the registrar.

Encouraged by the temporary fortunate victory, Jubilee Deputy Secretary-General and Ruto lead spear-carrier, Soy MP Caleb Kositany, boasted his side has the majority and will be proceeding to the next move: to unilaterally convene parliamentary group meeting and “takeover the party”.

Sentiments that revived President’s proxy Jubilee party’s vice-chairman – David Murathe – challenging the DP’s side to “go ahead and takeover the party if they can,” but said without elaborating that “soon they will be hearing from us and it will be a thunderstorm!”

Mr Murathe disputed the figure of 146 MPs the DP claimed had sent objections to the Registrar of Political Parties, which he termed “the work of forgery”.

He said: “People are known by names. The DP should have published names and signatures so that we actually know who is with us and who is against us”.

Little did they know that the Thunderstorm would be a matter of days before it could strike.

He was a member of the flamboyant “Sky Team” which comprised Murkomen, who was then his deputy, Kikuyu MP Kimani Ichung’wa and Moses Kuria, which crisscrossed the country in choppers to campaign for Jubilee and market Ruto as Uhuru’s successor.

Kindiki’s ruling against Uhuru’s move to take over key operations of Nairobi County through the Nairobi Metropolitan Service as a move that could have angered the President.

Kindiki, following a motion by Murkomen, ordered an investigation into the President’s conduct in the take over process, and gave the matter to the Devolution and Justice and Legal Affairs committees which, are chaired by Senators Joseph Kinyua (Laikipia) and Samson Cherargei (Nandi), both Ruto surrogates. But Lusaka later suspended the probe whose outcome, it was feared, may have compromised the President’s decision.

Jubilee, the offshoot of the president’s TNA, Ruto’s URP and 11 other small parties have combined total strength of 171 MPs.

But associates of the DP are quick to dispute the 50/50 strength in the National Assembly on claims that the former URP has significantly penetrated the formerly TNA zones, more so the Mount Kenya region.

The 2013 tally, where TNA and URP were listed as separate entities in the parliamentary tally. TNA chalked up 71 MPs and URP 60. The difference from the total of 171 in the 2017 tally is explained by coming in of the 11 small parties and inroads combined Jubilee made in the opposition zones in the last election.

In Kiambu, only Kikuyu MP Kimani Ichung’wa In Murang’a, it is only Kiharu’s Ndindi Nyoro and Kigumo’s Alice Wahome on his tow. And in Nyeri, there is only Mathira’s Rigathi Gachagua, and in Nyandarua and Kirinyaga, only the woman reps, Faith Gitau and Purity Ngirichi, respectively, are with him. That is only seven out of 38 MPs in Central Kenya

Let’s have a look at the numbers: Uhuru’s share of 85 MPs added to ODMs 75 — that is minus Malindi ODM’s Aisha Jumwa, who long defected to Ruto camp — would make a bloc of 160.

If you throw in Kanu’s 12, and half of the independents (7), that shores the number to 179. And if Kalonzo were to be predictable and stay with Uhuru/Raila line-up, that would make a solid bloc of 202 MPs.

The number would be way above the 175 needed to constitute simple majority in the National Assembly, and only 31 MPs short of the 233 required to make two-thirds majority.

On the other hand, Ruto’s 85, his half share of seven independents, and Musalia’s 14 would give him a bloc of 106. If Wetangula’s 12 MPs were to come on board, he would chalk up a 118 member voting machine — far behind the 202 in the rival camp.

DP Ruto has no numbers apart from illusionary Numbers. He is surrounded by disloyal friends because of his ill gotten wealth. He has lost game of numbers in his own party – time and again. The Cabal doesn’t want him.