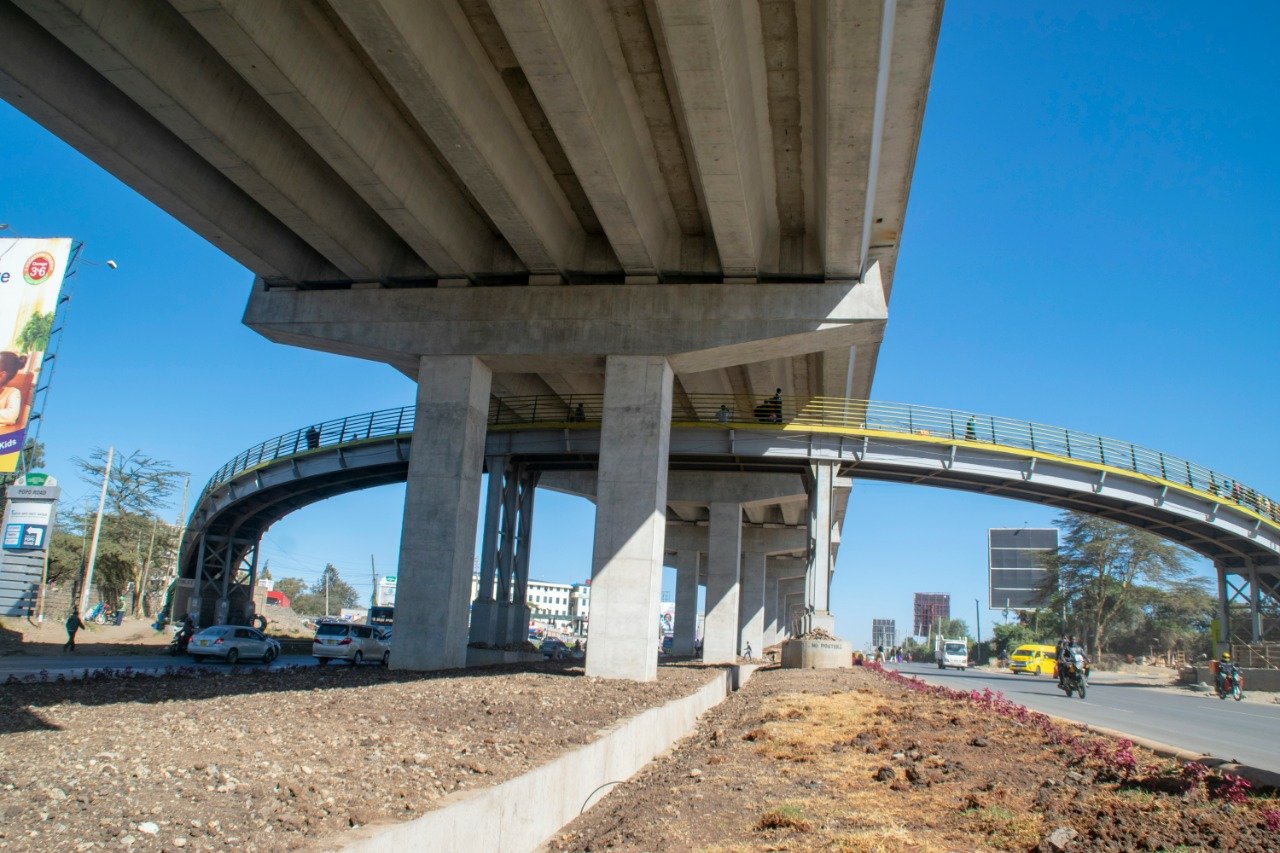 The appointment will of Eng. Kung’u Ndung’u as the new Kenya National Highway Authority (KeNHA) Director-General has attracted both praises and criticism from stakeholders.

In reference to our previous article where we elaborated how the appointment was just another of many scandalous appointments laced with nepotism from the Transport and Infrastructure Cabinet Secretary James Macharia, a lobby group has come out to echo sentiments and reports raised in the piece.

Concern Citizens Kenya is now challenging the conduct and the manner in which the whole process of appointing the New Director General at KenHA Engineer Kungu Ndungu was carried out.

”WE are reliable informed that the whole process of appointment from the declaration of Vacancy, advertisement of the vacancy to the interviews of the shortlisted candidates was allegedly flawed and that the board members were coerced into picking Engineer Kungu Ndungu who allegedly performed poorly during the interviews. This was
compounded by threats to disband the board of KenHA by a senior ministry official on the strength that the board is Constitutionally not properly constituted should they not approve Engineer Ndungu as the new Director General.” Reads the statement seen by Kenya Insights.

“We are also reliably informed and privy to the fact that the recruitment process was not
compliant to the laid down rules, policies, regulations and guidelines as set out by the Board
of KEnHA, That the whole recruitment process was shrouded in secrecy and non-disclosure of the
persons who applied for the position of D/G and those shortlisted for the interviews which
contravenes the Constitution of Kenya 2010, the right and access to Information held by the
state or its agency.” It continues.

According to sources speaking to Kenya Insights, About a month ago in the heights of intense lobbying for Ndungu, Eng. Wangai Ndirangu and Eng. Kung’u Ndung’u organized two covert retreats for friendly road contractors in Nairobi and Mombasa whereby it’s alleged a hefty amount of money was collected from the contractors to go to some unknown course, bearing in mind that a succession process was ongoing, your guess is as good as mine. It is understood that contractors were promised unwarranted access to lucrative contracts under the leadership of the new DG. We also understand that the “Wangai-Mundinia team” had the full backing of Infrastructure CS James Macharia.

The team roped in the services of a powerful and influential Office of the President Principal Administrative Secretary (PAS). The Mathioya-born man is feared for his ruthless efficiency in bulldozing and having his way concerning state appointments, his influence dates back to President Mwai Kibaki’s days, he is known as Mr Fix-it by his OP peers.

The outgoing Ag DG Eng David Muchilwa had vested interests that raised eyebrows. Never in the history of the country has an outgoing head of a government agency or department developed such overt interest in who succeeds him. However, our investigation has confirmed that a trail of blatant theft, open corruption and tribalism in the hiring of staff characterized the tenure of the outgoing holder of the office of DG at KeNHA. Souses say the outgoing DG is determined to ensure he’s properly covered by his successor; Eng. Ndung’u incidentally, was the outgoing DG’s preferred natural successor.

Appointment of Ndungu came at a backdrop of intense lobbying in controlling the lucrative docket that is marred with corruption and scandals from kickbacks. Many senior engineers feel the process was flawed and Ndungu was the least qualified candidate.

“CS Macharia must never be allowed to DESECRETE the engineering profession! We the professionals have upheld without defeat the highest integrity values in honor of this sacrosanct profession! Please stop using strange excuses to perpetuate tribalism in this profession!” Eng. Omari Harrison said.

“At KENHA (a young kikuyu engineer, Kungu Ndungu-a toddler professional by all accounts,has ‘beaten’ all competitors to emerge top & therefore he’s the new DG!!!The previous DG was also a Kikuyu! In this honorable profession, CS Macharia should stop the naked tribalism!”

Another source talking to Kenya Insights confided, “Kungu Ndungu was the least qualified engineer at KeNHA. He doesnt have a masters in Engineering and his degree is being contested in court. He was appointed due to kickbacks he was sending up. Notably in the Dongo Kundu projects, the roads have deteriorated and retention walls collapsed due to coners being cut. Now kickbacks coming through from Fujita corporation building phase 2 via Machiri. Once Kungu Ndungu was transferred to Nairobi, Machiri received contracts for Expressway where Ndungu was in-charge.”

Related Content:  Here's The Truth About Jameson Whisky Made In Kariobangi

Concern Citizens Kenya has raised exact issues on the suitability of Ndung’u based on his academic questionable credentials.

“IT is important to note that prior to his appointment as the Director General Engineer
Ndungu was the Director Road Assets and corridor Management at KenHA a position which
was contested by a section of Human rights fraternity in Kenya on his suitability and
ACADEMIC qualification at the high court of Kenya in a case file number E/58/2021 by the Commission of Justice and Human Rights and the matter is live and active at the high court in Kenya. We are therefore surprised to see a person whose capacity and academic qualification are subject to a court process is being approved for appointment and elevated to a higher office of the Director General by the CS James Macharia under unclear circumstances.”

The lobby group has given the CS a 7 days notice “Having shown contempt and incompetency in the management of the state agency, KenHA
which is tasked with Multi Billion Dollars infrastructure projects in Kenya and for fear of
losing our money to incompetent managers at KenHA Board, the Director General Kungu
Ndungu and the ministry of Transport under CS James Macharia,” to revoke the appointment of Ndung’u, dissolution of KeNHA board, resignation of KenHA board of Directors as the board is unconstitutional as it is currently constituted making them prone to manipulation and coercion as it is currently happening and are also seeking for the resignation as the CS Transport for failure to show leadership and to properly guide the board of KeNHA.

With the appointment clouded with secrecy and perhaps efforts to seal off the big questions and paint a saint picture of Ndung’u, KeNHA went on an extreme PR drive sponsoring news items on local media to paint him as the saint. A clever move to keep the public eye out of focus on the scandalous appointment. 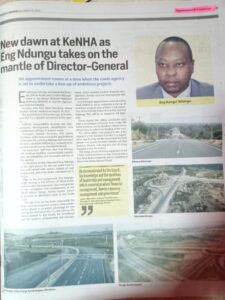 A sponsored article on a local daily newspaper singing praises for the DG Ndung’u.

This isn’t the only appointment by tribal chief CS Macharia that has been challenged, barely a month ago, the Employment and Labour Relations Court overturned the appointment of three board members of the Nairobi Metropolitan Transport Authority (NAMATA) citing ethnic dominance.

In that particular ruling, Justice Nzioki wa Makau said the appointment of Mary Chege, Zachariah Mungai and Ronald Ndegwa on February 5 was “unconstitutional, unlawful and thus void ab initiofor the wanton disregard to the national values espoused in the Constitution.”

“The interested parties subject of this suit (Chege, Mungai and Ndegwa) are all from one ethnic community and do not represent the diverse fabric that is the Kenyan nation. Their appointment therefore smacks on the evils of old which Kenyans opted to do away with in the Constitution we took on for ourselves in 2010,” Justice Makau ruled.

NAMATA is tasked with among other things the oversight of an ambitious Sh5.6 billion Nairobi Bus Rapid Transit (BRT) system which is part of an initiative to ease traffic congestion in the capital.

The Law Society of Kenya, the petitioner, had argued that the appointments of Chege, Mungai and Ndegwa were made in violation of key tenets of law including public participation.

The petitioner also told the court that the appointments failed to conform to Article 10 of the Constitution on national values and principles of governance which include social justice, inclusiveness, equality, transparency, accountability, human rights, non-discrimination and fair administrative action.

LSK further argued equal rights – including the right to opportunities in the political, economic and social spheres – guaranteed to all citizens under Article 27 were infringed.
Kenya Insights allows guest blogging, if you want to be published on Kenya’s most authoritative and accurate blog, have an expose, news TIPS, story angles, human interest stories, drop us an email on [email protected] or via Telegram
Related Topics:Concern Citizens KenyaKenya National Highways Authority (KeNHA)Kungu NdunguTransport CS James Macharia
Up Next

He Killed His Victims For Their Panties, Serial Killer Nabbed By DCI