Trouble courts him or the other way, an investigating officer in the attempted rape case against Meru Senator Muthika Linturi says they are investigating the disappearance of evidence in the case.

This after photos and videos in the possession of the complainant supporting her case were destroyed.

In an affidavit filed in court, lead investigator Keith Robert said the Directorate of Criminal Investigations has reasons to believe that the senator had a hand in the loss of the evidence and wants him probed.

Senator Linturi is facing charges of attempted rape, where it’s alleged that he entered the victim’s hotel room while her husband was out and attempted to defile her.

The investigator says they believe Senator Linturi could have played a key role in deleting the nude photos and videos that were to be used as evidence in the case and were in the custody of Nanyuki police station.

He told the Court that forensic analysis and reconstruction of the mobile phones is ongoing to retrieve the lost data.

The photos and videos were taken by the victim and her husband at the Maiyan villas on the material day.

In a sharp twist of events, hours after the court’s session, a video purportedly of the senator caught in the compromising situation surfaced online.

The video has sparked reactions online.

LEAKED!
In this video, Senator Mithika Linturi is caught pants down in another man's hotel room trying to sleep with his woman.
These Tanga Tanga MPs have no manners. pic.twitter.com/lv4PeHYFKc

UDA Senator Mithika Linturi can’t seem to keep his appetite under control. This time round, he was caught in another woman’s room, trying to force himself on her. William Ruto’s best friend. pic.twitter.com/wQnpuvquCW

Mithika Linturi even tried to destroy images/videos that captured him in another Woman's room. A man who is facing RAPE CHARGES now being accused of destroying evidence, this Sunday he will be in Church, shouting to us how righteous he is and Raila is a mganga! Stinking HYPOCRITE

The Senator has however on several occasions denied being involved in any sec crime and that he was set up.

According to Linturi, kidnappers falsely claimed that he had strayed into one of the men’s villas in the dead of the night and snatched his wife.

This is part of Linturi’s response to claims of entering into a couple’s hotel room when the husband was out and allegedly attempting to rape the wife.

However, in a letter by DCI George Kinoti, the woman reported to the investigators that she was with her husband and some friends at Maiyan Villas Resort Nanyuki on January 29 having fun at the hotel.

The woman claimed that later that night she retired to their room but she did not lock the door because her husband was still out.

At about 3 am she heard the door being opened and since the lights were switched off, she assumed it was her husband.

The man entered her bed and started touching her in a very unusual manner.

However, according to the woman, the man she thought was her husband never uttered a single word while he inappropriately touched her and later they both fell asleep.

“Thirty minutes later she heard a knock on the door and went to open the door, only to find her husband standing at the door. [This prompted] her to switch on the lights since she was confused who was in her bed whom she thought was her husband,” Kinoti’s letter reads.

On switching on the lights, they both realised there was a stranger in their bed and the husband became furious, raising the alarm.

Their friends who were with them in the hotel came to investigate and one of them identified the stranger as Linturi.

It was established the senator was also a guest in the resort and had a room adjacent to the couple’s room. It’s not clear if the legislator confused his villa with that of the couple.

The woman alleged that Linturi offered to settle the matter amicably, offering them Sh200,000 in cash and a Sh800,000 cheque but later reported them for extorting him.

The couple decided to file their complaint of attempted rape and an indecent act with an adult against him. 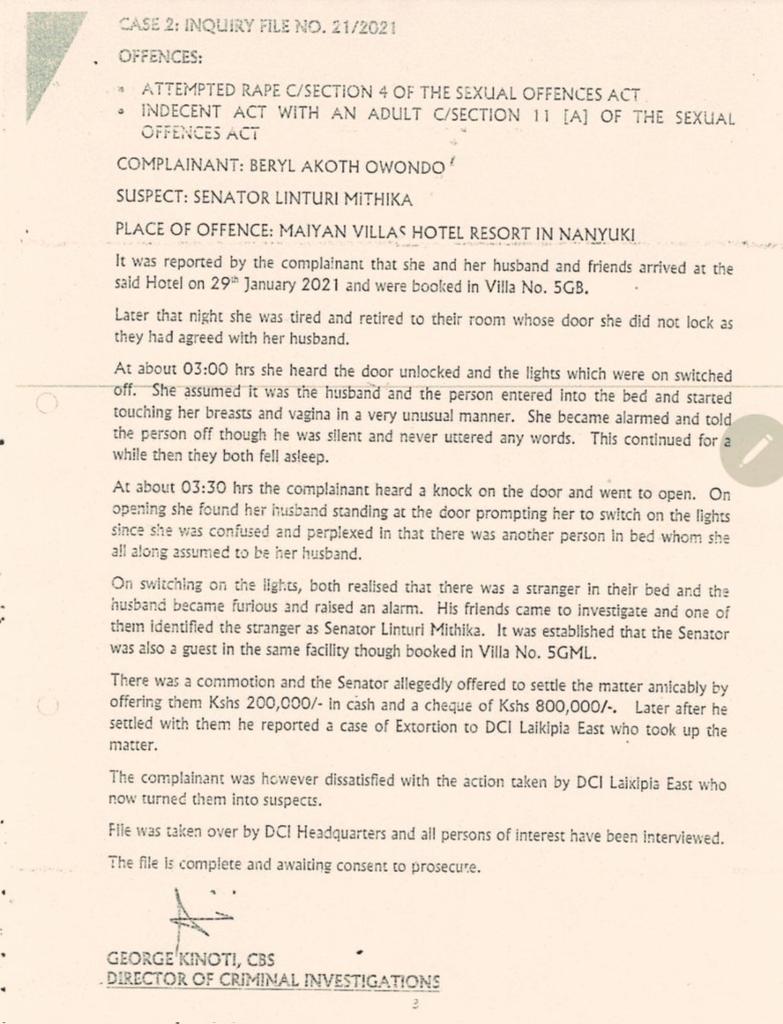 The senator claims that he was the victim in the alleged rape incident and never went to the couple’s room as alleged.

In a letter written to the DPP by his lawyers dated June 11 2021, the senator alleged the woman’s husband was the one who barged into his room, accusing him of entering their room and sexually assaulting his wife.

The letter states that on January 29, Linturi checked into Maiyan Villas Resort Nanyuki with his girlfriend.

His lawyer Muthomi Thiankolu said four men stormed into Linturi’s room, beat him up, stripped him naked and took nude pictures of him.

According to the letter, the men further threatened to publish the photos online unless he gave them Sh1 million.

Thiankolu said the ‘kidnappers’ falsely claimed that his client had strayed into their villa and snatched one of their wives.

However, Linturi said that would be impossible because he was with his girlfriend in his room and there was no way he would go to any other room.

According to the letter, the intruders in his room told him the money they referred to as ‘kondoo’ was a penalty for Linturi’s action of entering into the couple’s room.

Thiankolu said Linturi pleaded with them that he didn’t have any money but they insisted on money.

“The kidnappers took Sh200,000 cash and directed Linturi to call his friends and raise the Sh800,000 balance” the letter reads.

It is alleged that Linturi was scared, trapped and desperate so he made frantic calls to his friends to raise the cash but only managed to get Sh298,000.

They refused to take the money through M-Pesa so Linturi begged them to allow him to go to withdraw the Sh800,000 from the KCB Nanyuki branch.

The lawyer says the legislator was allowed on condition that he leaves his bag, writes a cheque and signs an undertaking that he owes them the money.

However, immediately after he left the hotel, Linturi did not go to the bank but proceeded to the police station and reported them for extortion.

Linturi now finds himself in more trouble given the missing crucial evidence that the police are now investigating and pinning him as being behind the destruction.

Linturi is seeking to terminate the attempted rape charge because the police have failed to provide documents in their possession.

With a pile of fraud cases that he’s battling in court, a confirmation of this rape case would put him in criminal records and frustrate his gubernatorial bid for Meru County.

Kenya Insights allows guest blogging, if you want to be published on Kenya’s most authoritative and accurate blog, have an expose, news TIPS, story angles, human interest stories, drop us an email on [email protected] or via Telegram
Related Topics:rape caseSenator Mithika Linturi
Up Next

NYS Storekeeper Unable To Explain Source Of His Sh227M Wealth