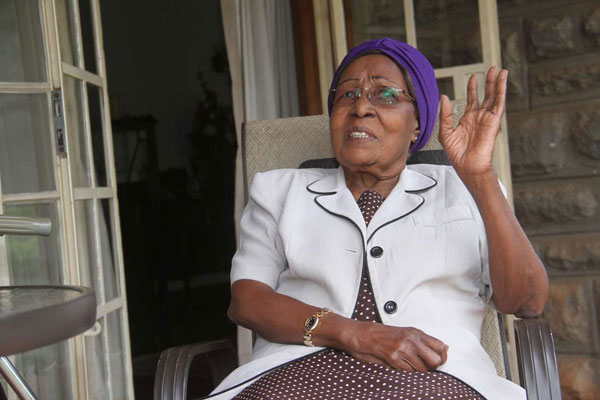 President Uhuru Kenyatta’s kin has moved to court to sue his stepmother over the control of Sh57.6 million which is linked to the transfer of shares in Gateway Insurance.

Udi Gecaga who is President Uhuru Kenyatta’s brother-in-law, In a case filed under a certificate of urgency, wants the court to allow him access to the millions of shillings which are held in a joint account at KCB Group.

The former chairman of Lonhro East Africa is accusing his stepmother, Margaret Gacigi Gecaga, of refusing to sign for release the millions of shillings money after the Court of Appeal in a ruling stated that the Sh3.2 million shares that belonged to the father, Bethuel Gecaga, were not part of the matrimonial property.

In the ruling, the judges had stated that the stepmother had no direct claim to Bethuel’s shares and placed the money in a joint account pending the conclusion of the suit. The said shares were transferred in 2012 to a firm known as Quinvest Limited, where Udi has an interest.

Margaret had argued that the transfer of the Gateway shares were both fraudulent and illegal, arguing that she was entitled to the shares in the insurance firm as the spouse of Bethuel, She lost the case at the High Court and appealed, prompting Udi to seek the Sh57.6 million plus interest after her appeal was denied.

The case will be heard on June 4th.

Kenya Insights allows guest blogging, if you want to be published on Kenya’s most authoritative and accurate blog, have an expose, news, story angles, human interest stories, drop us an email on tips.kenyainsights@gmail.com or via Telegram
Related Content:  Women Are Using Toothpaste To Tighten Their Vagina And Doctors Have A Warning
Related Topics:
Up Next