In March 2019, the president’s official Twitter handle was deactivated and vanished. While many thought this would be temporary, it never became the case.

Before the account was deleted, this what it read. “If you are corrupt we will fight you. You can be my brother or my sister or my closest political ally. I won’t be clouded by ethnicity or status in my quest to leave behind a united nation and I will continue championing for Kenya’s unity.”

Later on, statehouse made a statement over the decision to suspend the account.

Uhuru Kenyatta’s Twitter account has now been taken up after being in deactivation mode for more than 30 days Twitter limit. The account which had the handle (@UKenyatta) tweeted again in March 2020 after being deactivated in May 2019. 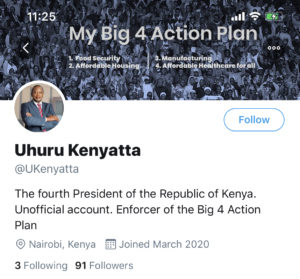 President has now lost the original handle which is now being run by a different person making it an unofficial account. Twitter allows creation of parodies of famous people as long as you indicate it.

Kenya Insights allows guest blogging, if you want to be published on Kenya’s most authoritative and accurate blog, have an expose, news TIPS, story angles, human interest stories, drop us an email on [email protected] or via Telegram
Related Content:  Uganda Announces Bill Imposing Death Penalty For Gay Sex
Related Topics:
Up Next