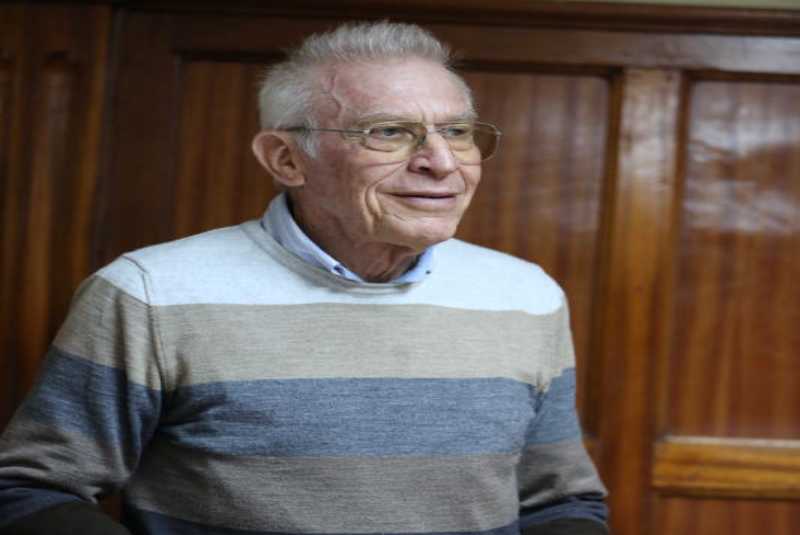 Paul Curzon in the witness dock at a Milimani high court . Alleged land grabbers had sold his land after saying that he was dead 26/7/2018.

Two Nairobi businessmen are accused of allegedly faking the death of a British engineer and grabbed his land worth Sh200 million in Nairobi.

The two businessmen; Martin Muthama and Stephen Kirianki are said to have faked the death of Pavel Paul Curzon and taking over his properties in Kileleshwa and Ngong Road.

In an affidavit presented to court, Paul claims that the two land fraudsters prepared a death certificate which they used to change registration ownership of the property.

“They then timed when I was away to invade the land and take over the possession,” read part of the affidavit.

According to Paul, the two claimed that he died in 2006 and that he had sold to them the property in 2005 before his death.

While he was in the UK, he was notified that Muthama and Kirianki raided his home with the assistance of police officers from Kilimani Police Station and forcefully took possession after chasing away his workers.

“They timed while I was away in the UK and invaded my home, chased away the domestic workers, stole my properties and put up the land for sale,” he said.

However, the businessmen maintained that Paul died in August 2006 after buying his property in 2005.

The two claim that the person who is claiming to be Paul is a ghost.

Justice Samson Okong’o, of the Environment and Lands Court summoned the Chief Lands Registrar to produce records of the two businessmen.

Additionally, he also summoned the officer commanding Kilimani Police Station to appear in court and disclose the full names and identities of people his officers helped to evict the Paul and his tenants from his land.

Related Content:  Governor Awiti Is Back In Office After Eye Surgery
Kenya Insights allows guest blogging, if you want to be published on Kenya’s most authoritative and accurate blog, have an expose, news TIPS, story angles, human interest stories, drop us an email on [email protected] or via Telegram
Related Topics:Martin MuthamaPaul CurzonStephen Kirianki
Up Next

Court Okays Extradition Of Gichuru And Okemo To The UK