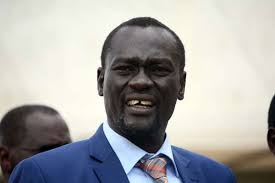 Recent remarks by Deputy President William Ruto on a perceived “lack of priority” by the County Government of Turkana in service delivery is erroneous, mischievous and will not go unchallenged.
Therefore, the TCG wishes to state the following:
In his tour of the county, the DP has proven in his utterance and actions of his complete disrespect of the County Government of Turkana and its leadership. His itinerary included visits to County Funded health and water projects but without the courtesy of informing or inviting the host government.

Ruto has refused to see any good in the performance of the County Government and despite existence of an intergovernmental framework of coordination and consultation between the two levels of government, he has kept Turkana County Government in the dark on his visitation. Instead, he has resorted to attacking the Governor at every opportunity through roadside political propagandas.

It has also not gone unnoticed to Kenyans and to the residents of Turkana that this unwarranted attacks on the county government is part of a bigger plan to install a weak administration on the Turkana people, a leadership that he can manipulate and one that can easily bend to wishes and goal of plundering resources of Turkana unabated.

In his utterance, the DP failed to provide a satisfactory answer to the Turkana people on the pertinent question of division of oil benefits the Jubilee Government is behind the attempt to disposes the Turkana of oil benefits through a punitive legislation such as the changes proposed to amend the Petroleum Bill 2016.

William Ruto has been part of the last three regimes that ignored the plight of the Turkana people. He was in government during the reign of KANU, he served as a minister in the government of NARC and later the Grand Coalition Government now as the seating Deputy President in the Jubilee Administration. These regimes have made no sustainable effort to support the Turkana development agenda, and it therefore raises the question, why the renewed interest in Turkana affairs?

Related Content:  Stanford University Graduate On Why He Decided To Settle Back And Work In Africa Instead Of The West

Under the Jubilee Government, insecurity in Turkana County has deteriorated to unprecedented levels.
The attack on the leadership of Governor Josphat Nanok adds to a trend of the DP attacking strong leadership and other ODM Governors across the country.

This in our opinion is a futile attempt to divert the attention of Kenyans to the monumental failure by the Jubilee administration to deliver on promises it made to Kenyans.

Ruto’s roadside projects declarations are just but empty rhetoric meant to deceive the Turkana electorates. A good example is a grid power that was promised to the people of Lokichar before last general election and which is yet to materialize four years and counting.

Anyone in his right sense would question why these promises are coming at the end of five years and at general election campaigns.
The Turkana County Government achievements can best be enumerated against targets in the CIDP, I will list but a few.

In the four years of existence;
The county government has constructed more than 200 ECDE centers across the County, which have been equipped and teachers recruited to the centres, a factor that has improved access to education in Turkana. During our last recruitment of 300 teachers in 2015, it even donated 200 teachers to primary and secondly school after an appeal from education stakeholders in the County.

To boost pastoral economy for the largely nomadic people of Turkana, we have resourced the purchase of veterinary drugs, equipment and vaccines in the last financial year alone.

We have also completed over 150 boreholes and continue to repair many others boreholes, and aim to construct two dams in every ward.
The process of utilization of Napuu aquifer in the construction of Napuu water project is underway and with the remaining works consisting of construction of storage facilities and pipeline systems.
The county is also upgrading high yielding boreholes to solar systems in over 50 sites.

To boost food security, we are establishing new irrigation schemes, the Nakwamoru irrigation scheme and at Lomidat spate dam in Turkana West, with construction of model drip irrigation system in Kapese in Lokichar, Lobei in Loima, Kachoda in Lapur and Nakukulas in Turkana East in the pipeline.

So far, 250 hectares of land has been utilised for crop production which has benefitted over 5000 people with an aim of scalping this upto to 830 hectares.
During this past financial year, 3633 acres of land have been utilized for cereals production, yielding over 50,000 bags of maize and sorghum per harvest.
On health, change of status from a District Hospital to a County Referral Hospital was a flagship project of the county government through which the diagnostic capacity of the hospital has been expanded with the main lab receiving state of the art equipment. This includes an oxygen plant, CT scan, medical supplies logistics unit (store), new modern mortuary, cold chain for vaccines all of which have greatly reduced mortality rates, the number of referrals outside the county as well as raising the quality of health service delivered.

The Ministry of Health is procuring container clinics to serve nomadic communities which will be placed along migratory routes. This will improve access to healthcare services to our nomadic pastoral communities.

In the current Financial Year, Turkana County Government has distributes two relief cycles countywide with a total of 900,000 beneficiaries.
The Food quantity per cycle was as follows: 40,000 of 50kg bags of cereals, 10,000 of 50kg bags of pulses, 10,000 20litre jerry cans of vegetable oil.

The County has also, in partnership with relief partners such as Kenya Red Cross, World Vision, Oxfam, Unicef, World Food Program, National Disaster Management Authority, Save the Children and others, responded to emergencies with supplementary food distribution, fuel subsidy, aquatabs, and other non-food items.

Access to solar power to public utilities has also improved through the government’s efforts to fit each of these institutions with solar power systems.
In a move aimed at improving trade and nurturing the entrepreneurship spirit across the county, 14 market stalls have been built in all the six sub-counties.
Even with the above, there still exists an elaborate process in place to account for public funds and systems to deal with perceived abuse or misuse of the same, all of which we believe are known to the DP.

However, since the case he has against Turkana County Government lacks merit and is without basis, he has taken the less honourable route of political propaganda.

Besides, DP Ruto lacks the moral ground to lecture anyone on matters integrity and financial probity since almost each and every scandal on the Kenyan soil can be traced to him and individuals associated with him.

Successive regimes subjected the Turkana people to skewed development for long periods since independence, leaving a heap of problems that requires monumental financial resources for the region to catch up with the rest of Kenya.
Therefore what the County Government requires is complementary support from the National Government, not admonition meant to settle political scores.