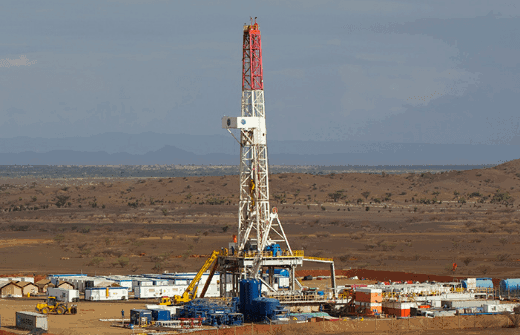 Questions have started arising from what exactly is the dangling London-listed Tullow Oil (LON:TLW) doing in Kenya’s Ngamia 1 and 2 just like other ‘African’ discoveries the firm has allegedly invested in.

Tullow Oil, which is active in Ghana, Kenya, and Uganda, has seen recently setbacks in its flagship projects in Africa.

In Ghana, production performance has been significantly below expectations from the Group’s main producing assets, the TEN and Jubilee fields, the company said in a statement, slashing its production guidance for FY 2020 from the FY 2019 forecast.

In an operational update issued on Monday, Executive Chair Dorothy Thompson noted that the board has been disappointed with the poor performance of the African assets.

“The Board has, however, been disappointed by the performance of Tullow’s business and now needs time to complete its thorough review of operations. A review of the production performance issues in 2019 and its implications for the longer-term outlook of the fields has been undertaken and has shown that the Group needs to reset its forward-looking guidance,” Thompson said,

“In light of these new production forecasts, there will be a thorough reassessment of the Group’s cost base and future investment plans in order to allocate appropriate capital to the Group’s core production assets, development projects and continued exploration,” added Tullow.

In the half-year to June, Tullow posted a net profit of Ksh.10.5 billion supported largely from growth in discovered resources, lower operational costs and a slide in short-term debt maturities.

In Kenya, Tullow Oil also has to reach an FID on-field production and completed a deal to export 200,000 barrels of crude oil, in its first-ever export of the commodity.

“We are now an oil exporter. Our first deal was concluded this afternoon with 200,000 barrels at a decent price of US$12 million. So I think we have begun our journey and it is up to us to ensure that those resources are also put to the best use to develop our country to make it both prosperous and to ensure we eliminate poverty in Kenya,” President Uhuru Kenyatta said.

Commercial quantities of crude oil in Kenya were discovered in 2012 in the South Lokichar Basin. Africa-focused Tullow Oil, which discovered the resources, has continued its exploration and appraisal drilling campaigns in Kenya.

In June this year, Kenya’s government signed an agreement with France’s major Total, Tullow Oil, and Africa Oil to develop an oil processing facility with a capacity of 60,000 bpd-80,000 bpd, as part of Kenya’s plan to begin commercial oil production within a few years.

In the release of its first-half results last week, Tullow Oil had said that it expected the first export cargo of oil of the Early Oil Pilot Scheme (EOPS) to be sold and lifted in the third quarter of 2019.

Regarding the full field development, Tullow Oil said that Kenya’s government has gazetted the land required for the upstream development in Turkana, and pipeline land surveys by the National Lands Commission began in the first week of July.

“An Upstream Water Framework agreement has been drafted by Tullow and submitted to the Government of Kenya for their review. Given this significant progress, the FID of the Development is now targeted for the second half of 2020,” Martin Mbogo, Managing Director at Tullow Oil Kenya said.

But the Africa-focused oil explorer and producer has been silently shelving slashed productions. This has seen the firm suspend dividend amid massive poor productions.

Is Tullow Oil frying Kenya? Will we ever see Kenya export oil? Why is the government signing closed agreements with the firm that has now clearly been exposed of productivity exaggeration?

I don’t have access to the feasibility study results the firm allegedly did, but I’m of a perspective that we don’t have oil that can run nor be drilled for more than a decade. We are in a corrupt country that might be exporting air at the expense of poor taxpayers. Tullow Oil is a scam blanketed by petroleum CS John Munyes and a real time-bomb waiting to explode with coffers funds.

Kenya Insights allows guest blogging, if you want to be published on Kenya’s most authoritative and accurate blog, have an expose, news TIPS, story angles, human interest stories, drop us an email on [email protected] or via Telegram
Related Topics:ChinaGhanaKenyaLondonOilTullow OilUgandaUK
Up Next