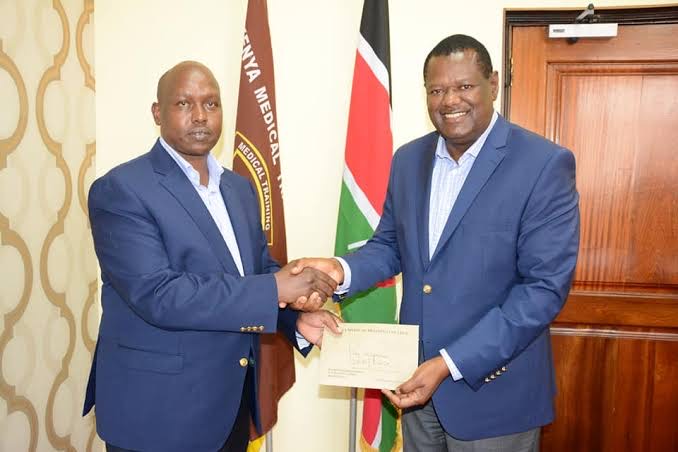 Many if not all concerned Kenyans have been left tongues wagging over the actions of Kenya Medical Training College continuation to freeze its operations when actually they should be among the frontliners during the 1st schools reopening phase in which Universities resumed their operations and openned their doors for the Final year class to shoot their last bullets as life has to continue and learners need to learn how to acclamatize to new norm.

Many if not all concerned Kenyans have made memes as a way of expressing their mixed reactions amongst them the very same KMTC students  as to why and how on earth would medical school be shut down when Patients and Covid19 patients need the most their holistic care, while many institutions worldwide are conducting research are striving to find cure vaccine for the virus while our very own institutions are baby sitting their students at home.

Many if not all concerned Kenyans have been wondering the logistic where Primary school and Secondary school pupils resumed their operations and KMTC believes perhaps their students are more careless than their younger siblings? Smh!

With many Final year students  at home baby-sitting, left frustrated, being confused with heartbreaking Memos every now and then – their dreams and opportunities are now at stake.

With this year’s graduation plan changed to be conducted virtually, sigh of relief to the graduating class of 2020 for cutting down the usual graduation fees remains a fallacy. The fees has stood still when logically and actually the cost of budget and expenditure will be minimal as compared to normal previous years. Raising eyebrows whether  KMTC is a caring Organization or a Money making organization? An act of wanting to Spend less and Earn more.

And being an Independent institution under Ministry of Health which is corrupt to the core, illustrates how arrow points the eater.

Schools could in the next three weeks reopen for in-person teaching for three other classes in primary and secondary institutions.

Education stakeholders seem to have reached an agreement to reopen schools for the second phase. In the proposal, in-person learning for Grade 3, Standard 7 and Form 3 learners will resume.

The three classes account for about three million learners. The proposal is to be presented to the President. If adopted, it will mean those in Grade 1-2, Standard 5-6, and Form 1-2 and pre-primary will remain at home.

With four weeks gone by since the first reopening, Nicholas Gathemia who represents the Kenya Primary School Heads Association, said failing to reopen soon enough would create a headache for teachers.

It is going to be a headache for teachers to manage two parallel calendars.

Education stakeholders are also concerned about inequity as many learners are still at home, while others are in school.

Nicholas Maiyo, the Kenya Parents Association chairman, said many parents have a difficult time explaining to Grade 4 pupils why they have to go to school while their siblings in upper classes are still at home.

“Latest December we should have all learners back in school… we have observed and realised that children at school are more disciplined than while at home,” he said.

Maiyo said since no vaccine is available, schools will borrow from what other countries have done. He said students should be restricted to the use of reusable masks.

Maiyo said this is because learners may be tempted to recycle disposable masks, thus exposing them to infection.

The revised school calendar issued by the ministry showed that the second term, which started on October 12, would end on December 23, allowing learners to break for only one week.

Learners will report back to school on January 5 for another 11 weeks. Standard 8 candidates will sit the Kenya Certificate of Primary Education exam between March 22 and March 24. Those in Form 4 will sit their exams between March 25 and April 16.

Kenya Insights allows guest blogging, if you want to be published on Kenya’s most authoritative and accurate blog, have an expose, news TIPS, story angles, human interest stories, drop us an email on [email protected] or via Telegram
Related Topics:Philip Kaloki
Up Next

How China Used Robots, Drones And Artificial Intelligence In Controlling The Spread Of Coronavirus