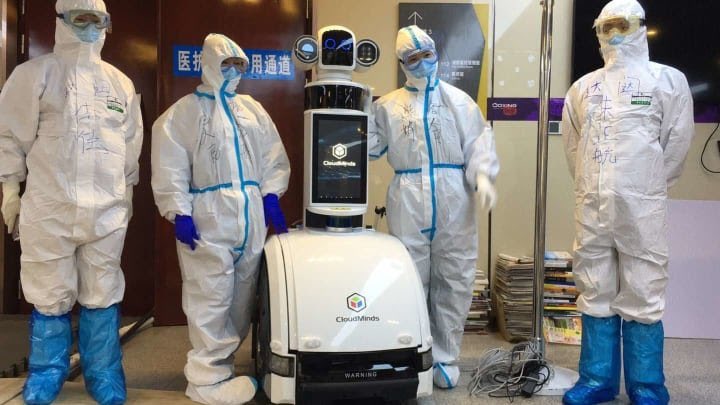 While most countries in the world are fighting exponential growth of coronavirus infections, China seems to have gotten the situation under control.

That’s been largely due to the Chinese government’s ability to enforce preventive measures more successfully than Western democracies. Individualism, a patchwork approach and fear of stopping economic growth backfired in the U.S. and some European countries.

An overlooked factor that helped flatten the curve in China: Technology.

Social distancing, contactless transactions, cleaning and gathering diagnostic data have been made possible by automated technologies developed at Chinese companies.

Pudu Technology from Shenzhen employed its repurposed catering robots in more than 40 hospitals across the country. The robots help medical staff deliver supplies and medicine to patients and limit health-care workers’ exposure.

Another company from Shenzhen, MMC (MicroMultiCopter), used megaphone-equipped drones to patrol the streets, warning groups of people who failed to wear masks to disperse. The drones are capable of spraying disinfectants in public places and measuring individual thermal signatures, helping to reduce the spread of the virus. In addition, the MMC drones monitored traffic, enabling uncongested vehicle movement and faster response rates in case of medical emergencies.

Other technologies have been employed as well. Chengdu city in Sichuan Province armed epidemic-control personnel with high-tech smart helmets that can automatically measure people’s temperature when they enter a five-meter range. The helmet sounds an alarm if anyone has a fever. 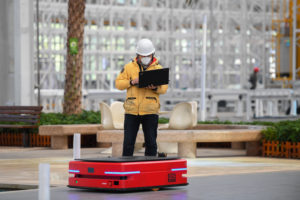 If you think that something is missing, you’re right. We haven’t mentioned AI — artificial intelligence. Alibaba, the Chinese tech and e-commerce multinational company, has developed AI that allegedly can detect coronavirus infections with 96% accuracy.

Finally, China’s vast surveillance system is finally being put to a good use: Facial-recognition cameras come equipped with thermal sensors that can detect people with fevers and those not wearing masks.

Mobile apps also play a big role here — Tencent and Alipay have developed apps that inform users if they’ve been in contact with a virus carrier and whether they should stay at home or be allowed in public spaces.

For these apps to work, however, additional personal data need to be provided by the user. Alipay’s app, which is in use in over 200 cities, classifies people by color codes: Red is for supervised quarantine, yellow is for self-quarantine and green means unrestricted movement.

The Airport Authority Hong Kong (AA) is using several latest disinfection technologies including a full-body disinfection channel and cleaning robots in the Hong Kong airport to reduce the risk of the #COVID19 spread. Find out how they work pic.twitter.com/mrn7S8VoVz

The lack of transparency of how these codes are generated has already led to much confusion and frustration, which is only amplified by the fact that the data entered in the app are shared with the government and police. The same is true of the surveillance. Privacy was never a big topic in the People’s Republic of China (PRC), and now the last shreds are being obliterated in the name of public safety. The country may eventually subdue the coronavirus infection, but at what cost?

Still, there are things that we Westerners could learn from the Chinese. Seeing empty streets of European and American cities on the news gives me hope that people are finally realizing this isn’t “just a flu” and that we need to take things seriously.

Tech can help, but this time it plays second fiddle to staying home and abiding by protective measures against the virus. Until a vaccine is approved, this is the best way the curve can be flattened and the burden on health-care professionals can be reduced to a sustainable level. So, until further notice, stay home and stay safe.

Safaricom To Pay A Director Sh61.7 Million For Unlawful Termination