Kenyans in the past few days launched a vicious online campaign dubbed #DeportSouthSudanese that closely bordered to xenophobia throwing the South Sudan citizens living in Kenya into a visible panic. However, according to the initiator of the hashtag, Cyprian Nyakundi, the country’s most popular, credible and controversial blogger, the campaign was sparked by the inaction and deliberate ignoring of Kenyan citizens rotting in the Sudanese jails without any pinch of justice.

Nyakundi, a deviant and relentless justice warrior as his profile dictates, talked to Kenya Insights saying the matter if the Kenyans unfairly jailed for life in South Sudan, had grown to become a matter of political scoring and deal cutting for officials between the two countries. It is for this reluctance within the foreign office that he decided to take the matter up.

However, as expected, the harsh angle of the approach taken by Nyakundi who argued out that Sudan a war infested region has Kenya as a safe haven for corrupt officials to launder their cash. Nyakundi is known to be ruthless and fearless when it comes to tackling matters corruption unearthed several dossiers pointing at Sudanese officials including president Kiir for laundering their money to Nairobi.

The larger good living South Sudanese population in Nairobi didn’t escape the wrath either as a comparison was made between them and Kenyans living in Juba and beyond. Generally; from the interactions, Kenyans feel a gap in tolerance saying; those living in SS are subjected to harsh conditions as compared to the lavishly living South Sudanese in Nairobi and Kenya where they’re treated without discrimination.

The unfairness in court started from the very beginning when the judge set bail per person at $14 million USD. Their lawyer was forbidden to meet with his clients unless during the trial. Continuous intimidation to witnesses by National Security and exactly a month into the trial the lawyer, Kiir Chol was threatened at Gun point by National Security, whose written communication was snatched away from him and his clients’ and forced to drop the case. 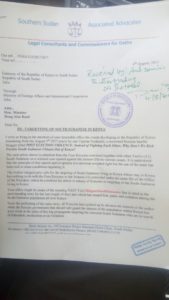 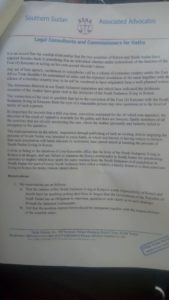 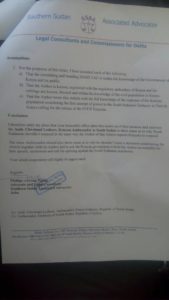 The abduction/kidnapping of Susan Anyieth from Nairobi, Kenya on 1st October 2015 by rogue elements from the South Sudan National Security Service with the help of the Kenyan Anti-Terrorism Police Unit (ATPU) and the National Intelligence Service (NIS) without due process of the law. This was done with total disregard to the international laws of extradition treaties. She was just a house wife, and she was forced to leave behind her 2-year-old son without anyone to take care of her. Just like her husband and the rest, she would be sentenced to life imprisonment with the fabricated charges and without legal presentation. In the next sequel, we will break down the high table politics and the intrigues of this international law contravention.

Following the viral protest campaign by Kenyans demanding for fair trial or release of their own, Kenya’s ambassador to the South Sudanese Republic was recently summoned to give explanations on the unexpected turn of events by the South Sudanese government. Amb. Cleveland Leshore is under siege to explain to the embassy of SS as to why they shouldn’t be worried for their citizens in a letter.

Kenya and South Sudan enjoy a cordial relationship with Kenya playing the mother to Africa’s last born nation following series of unending wars that saw them separate with Bashir. Kenyan authorities have promptly replied to the concerns, talking to the families affected, the foreign officials who conveniently goes missing in the calm and resurface on the storm, in their chorus, told the family to hold their horses as the government looks into the issue.

The fact that the South Sudanese judicial system is plainly compromised and don’t come anywhere close to international standards no wonder Sudanese and Kenyans were jailed without due legal process is in itself nauseating. The standoff seen to have been slowed down by the elections in Kenya but things would regain momentum immediately after the polls as the push for justice breaks the walls; this is according to assurance from Nyakundi and his group of defiant vicious group of bloggers. It is a gory picture for the two countries that have been in harmony to go head on a real or imagined tag of war. The two countries must move in speed to square off their differences and ensure both interests are catered for. The Kenyans jailed; outright need a fair trial. This too includes their Sudanese counterparts jailed for life under the same questionable circumstances.

This shouldn’t be called a diplomatic stand off as the countries stand a good chance of striking a deal. It don’t make empirical sense when your own citizens are undergoing it exposed to avoidable turmoil. Kenya must pull its socks up and the Sudanese government equally need to subject not only the four Kenyans but entire victims to a clear judicial system not some monkey ordeal as it stands.

Raila May Win The Popular Vote But Will ‘The System’ Give In to A Raila Win?