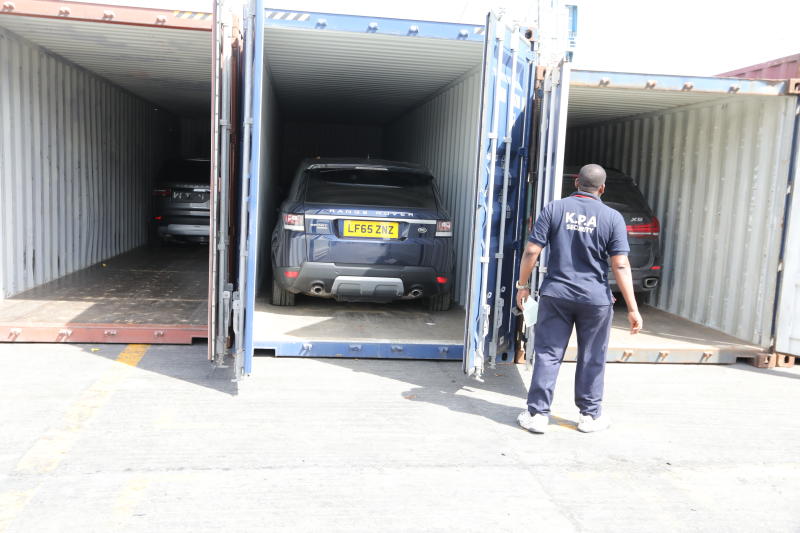 Importing a luxury SUV Range or a Mercedes Benz from the United Kingdom could land you a stolen vehicle, about a month ago Kenya Insights reported that International Police (Interpol) was helping Kenyan detectives investigate car theft in the country. In April this year, a Range Rover vehicle said to belong to controversial politician Steve Mbogo was impounded and buying from the U.K risks you the same.

A recent raid has seen over Six high-end vehicles reported to have been stolen and smuggled into the country  impounded. The three Range Rovers and three Mercedes Benz vehicles were reported stolen in South Africa and the U.K.

Preliminary investigations reveal that one of the Range Rovers was illegally registered as a Toyota Probox while another one believed to have been stolen from the United Kingdom. Details released by Interpol also revealed that one of the Mercedes cars was stolen from one Mrs. Tshegofasto Mabyane. The other vehicles were processed as semi-trailers.

The Kenya Revenue Authority (KRA) seeked international investigation and enforcement agencies to help arrest and prosecute the cartels behind the global vehicle smuggling syndicate birthing a multi-agency team involving KRA, National Security Agencies, Interpol, United Kingdom Authorities and other international partners that have been working together in investigations to break the syndicate involving the smuggling of stolen high-end vehicles from Europe.

In March, KRA intercepted three high-end fuel guzzlers at the Mombasa Port which were on transit to Uganda. The three vehicles – a Range Rover Sport, a Range Rover Vogue and Land Rover Discovery – were confirmed stolen in Interpol’s motor vehicles database.

In June, The Kenya Revenue Authority (KRA) confiscated 12 top-of-the-range vehicles that were smuggled into the country from the United Kingdom, a senior official said. Customs and Border Control Commissioner Kevin Safari said the vehicles worth millions of shillings were stolen in the UK last year and shipped in illegally by an international crime syndicate.

If you buy an imported Range Rover from the UK there is a high risk it is stolen, this is after an article in one of UK’s leading publications, The Economist, an officer with Britain’s National Vehicle Crime Intelligence Service, stated that about 79,000 cars were stolen from Britain in 2015. The report  said British police and their East African partners seized stolen UK cars worth more than Sh161 million in Uganda pointing out to a highly organized syndicate. Many buyers in Kenya and Uganda are unaware that the cars they are buying are stolen, the report added.

“…No one will steal from one country and enjoy the sweat of others while in another country,” The DCI has warned.

Labour Court And Why Sossion Is A Permanent SG Of KNUT