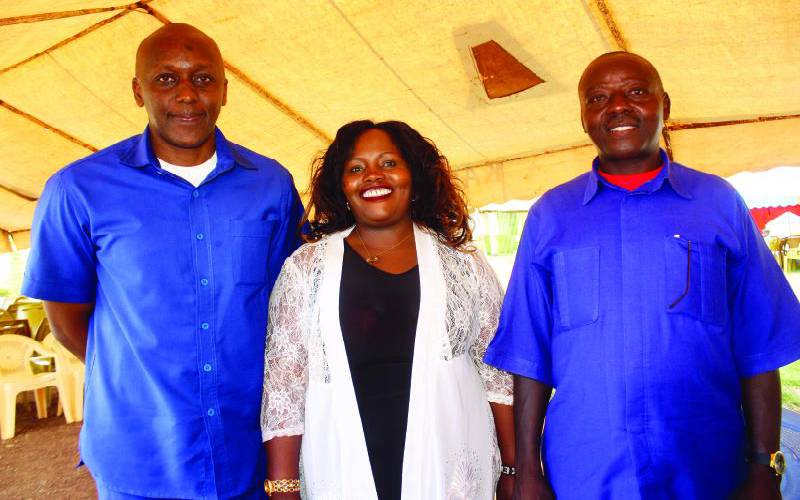 Dickson Mwangi Munene, Former Police Inspector in Nairobi who had been serving life imprisonment at Kamiti Maximum Prison for the murder of a former MP’s son has his life hopes restored after the High Court quashed his life sentence.

The convict Munene was in charge of Capital Hill police post was sentenced to death after he was found guilty of killing, James Ngang’a, son of former MP Patrick Muiruri, but this was commuted to life imprisonment after the new constitution banished death sentence.

On September 25, High Court Judge Luka Kimaru, set aside the life imprisonment, substituting it with a 20-year jail term which was to take effect from October 12, 2011. This is the day Munene and a friend Alexander Chepkonga were found guilty of murdering Ngang’a after an altercation at Crooked Q in Westlands.

Chepkonga successfully appealed against the death sentence and was set free.  The judge said in re-sentencing Munene, the court took into consideration the two years, that he had served in custody.

“Taking into account the entire circumstances of this case, this court is of the view that the sentence of life imprisonment that was imposed on him will not serve the ends of justice,” Justice Kimaru said.

According to Justice Kimaru, it was clear from the deceased’s family submission that they were still hurting. “It was clear that the applicant abused his powers as a police officer to unnecessarily causing the death of the deceased This court also put into consideration the ten years Munene has been in prison observing that he had applied himself gainfully by being a model prisoner,” Kimaru said.  Munene studied while in jail and earned a Masters degree in business studies.

The Commissioner-General of Prisons awarded Munene a certificate for being a model prisoner, a factor that worked in his favour in the re-sentencing.

“However, the life of the deceased cannot be restored. The gap that he left in the lives of his family can never be filled. It is a void that will remain for the remainder of the lives of the parents and siblings of the deceased. The pain that the family of the deceased suffered and continues to suffer must be weighed with the circumstances of the applicant, adding that this constituted an aggravating factor in sentencing.” Justice Kimaru stated

Munene made the application for re-sentencing following the Supreme Court decision in 2017, directing that all murder and robbery with violence convicts’ death sentences be reviewed. He said that he was the sole breadwinner of his family and his parents and his incarceration has affected their living standards.

The former officer told the court that he developed hypertension due to the conditions in prison. Through his lawyer, Kioko Kilukumi, Munene told the court that efforts to reconcile with the family of the deceased have been futile. He regretted the events that led to the killing.

Even as the courts decide to set the former killer police inspector, what is the moral value the courts will they be setting for the society? How many Police officers will turn rogue and killed people they cross paths on the streets? How many convicts have learned and changed their ways and yet they don’t get much rather such kind of sympathy from the courts?

Related Content:  Pathologist Reveals That Billionaire Jeffrey Epstein Was Murdered
Kenya Insights allows guest blogging, if you want to be published on Kenya’s most authoritative and accurate blog, have an expose, news TIPS, story angles, human interest stories, drop us an email on tips.kenyainsights@gmail.com or via Telegram
Related Topics:Dickson Mwangi MuneneHigh CourtJustice KimaruKamiti maximum PrisonMurderPatrick MuiruriPolice Inspector
Up Next

Last Minute: The Conny Tricks In Play To Change Old Notes In Kenya