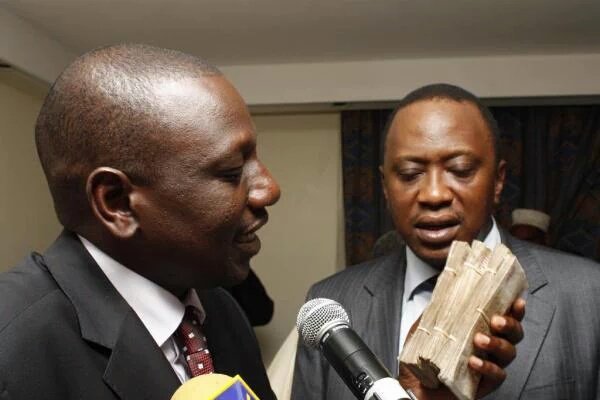 “Macavity’s a Mystery Cat: he’s called the Hidden Paw,
For he’s the master criminal who can defy the Law,
He’s the bafflement of Scotland Yard, the Flying Squad’s despair:
For when they reach the scene of crime—Macavity’s not there!”

This is the opening verse of Macavity the Mystery Cat, a poem by T.S Elliot published in 1939, which is among a collection of his poems discussing the psychology of a cat. The poem is best remembered when it was recited by the former British high commissioner to Kenya, Sir Edward Clay, at journalists award dinner in February 2005.

Another allegory is told of a meeting in Tanzania presided over by the founding president Mwalimu Julius Nyerere. In front of the room, there were two sacks; one with maize, and the other with money.
Nyerere; “If you ask a Tanzanian to choose one sack amongst the two, which one will he choose?”
Everyone (In unison); “The one with the maize!!”
Nyerere; “ And if you ask a Kenyan to choose a sack, which one would he choose?”
Everyone; “The one with the money!!”

The reaction of Tanzanians would have appeared obvious until Nyerere retorted;
“Wrong!!. If you ask a Kenyan to choose, he will take both!!”

These two stories though intended for comic relief depicts the scorn with which Kenyans are viewed.
In a recent interview on a local TV, renowned Kenyan Advocate Ahmednassir Abdullahi was heard saying that Kenyans were no longer engaging in corruption, they were now looting!

Sir Edward Clay while addressing Journalists at the dinner said;
“Corruption of one kind and another is so commonplace that the media can only afford to focus on the most flagrant cases. Recent events and almost daily news stories reveal new and emerging scams involving most forms of corruption: Abuse of office, conflict of interest, patronage, favoritism, clientism, grand and petty corruption, and, above all, questionable procurements.”

It seems that every time we feel we’ve reached a new low, the government surpasses even our own lowest expectations. The scandals range from the insidious, wherein millions of dollars have been stolen or remain unaccounted for, to the downright ridiculous, as when a government ministry justified misappropriating thousands of dollars by claiming it procured ballpoint pens for $85 apiece. President Uhuru Kenyatta has said his government has a zero-tolerance policy on corruption, but given the lack of convictions, many Kenyans have come to regard those statements as lip service.’’

The truth is, Corruption is bad. Corruption leads to massive hemorrhage of the economy of a country. It leads to the unfair and illegal distribution of capital and wealth, and most of all points, deprivation and dispossession of the poor masses at the bottom of the pyramid.
Simply put, corruption is evil, and if it goes unchecked, could cripple the entire substructure of a nation. As lawyer Ahmednassir suggested, corruption should be referred as looting. In my view, Corruption is nothing less than economic terrorism!

Nonetheless, this menace is not unique to Kenya. It is a worldwide phenomenon, but Africa appears to be particularly hit hard. Various countries around the continent have been plagued by various monumental scandals.

From the alleged Gupta and Nkandla scandals in South Africa, the Oil and copper fiascos in Zambia, the Tegeta escrow debacle in Tanzania, the Goldenberg, Anglo-leasing and NYS loot in Kenya, the Trafigura menace in Ivory Coast to the Halliburton disaster of Nigeria in 2010, all point to a continent that is struggling with to contain these economic crimes.
These illustrations also point to the complex and trans-continental nature of corruption. The recent “Panama papers” only slightly reveal how complex and sophisticated the situation is.
But there are some lingering questions; that refuse to faze out;

Related Content:  Ruto’s Predicament In Jubilee Party Is Not An Isolated Case

Is the war on corruption lost? Can this ferocious, unforgiving, vindictive beast of corruption be slayed, and by who?
The gravity of the fight could only be appreciated in 3D during the recently held State House Summit on Governance and accountability in October 2016, at State house grounds.

To be fair to the Jubilee government, (and kindly ignore my last name), this was a bold attempt by the President to confront corruption head on. It was a clear and open demonstration that the Jubilee government led by Uhuru Kenyatta, was willing to introspect and find solutions to this menace.

I was surprised to learn that even the fiercest critics of government on corruption were invited to meet the President in person; and say it all, in a no-holds-barred setup. It was however even more surprising that Mr. Githongo and David Ndii, who have a history of radical, intrusive and highly opinionated views on governance, never showed up at the summit…Pourquoi Messier? (That’s a story for another day)
The truth of the matter is that the President brought the corruption discussion to his doorstep, and attempted to invite everyone who mattered. What was clear is that Uhuru Kenyatta and William Ruto expected to hear the true and candid views and assessments from ordinary citizens.

When the President stood to speak at the meeting, one could feel his profound and the deep urge get useful suggestions from the Kenyans. Uhuru Kenyatta even challenged historians to tell Kenyans of any other regime in the history of Kenya; that had been more forthright in fighting corruption, than his government

During the open summit, the President took the initiative to parade his entire anti-corruption battalion to the nation. These were; Harakhe waqo of EACC, Tobiko the DPP, Muhoro the DCI, Githu the AG, Kimani of ARA, Boinett of NPS and Ouko the Auditor General.
The robust debate which ensued at the summit, especially on why progress on fighting corruption was slow, all but demonstrated the lack of instant coffee solutions in tackling corruption.

The battles against economic terrorism continue. ‘’Win some loose some’’ is the name of the game, but surely and verily the war will eventually triumph. We shall overcome!

The battles of corruption are vicious and protracted, especially in the context of a developed democracy like ours. This is an asymmetrical battle, pitting an accused who has amassed an amazonic war chest, against an accuser (Government) who is financially weakened after years of being looted by the accused. The accused has vast resources at his disposal, against a broke accuser.

Kenyans must, however, continue having faith in the Jubilee government. None other but the highest of the high office in the land has renewed its commitment and zeal in confronting corruption. The Statehouse summit on governance and accountability demonstrates this in black and white.

As Barrack Obama once aptly put it
“We know the battle ahead will be long, but always remember that no matter what obstacles stand in our way, nothing can stand in the way of the power of millions of voices calling for change.”
Aluta continua…
Writer: Anthony Mwangi
@trueMwangi

Birds Of A Feather? What’s At Stake For DP William Ruto As He Stands By His Crook PA Farouk Kibet On NYS Fraud

Not Yet Angry; Kenya’s Anger on Corruption Purely Cosmetic