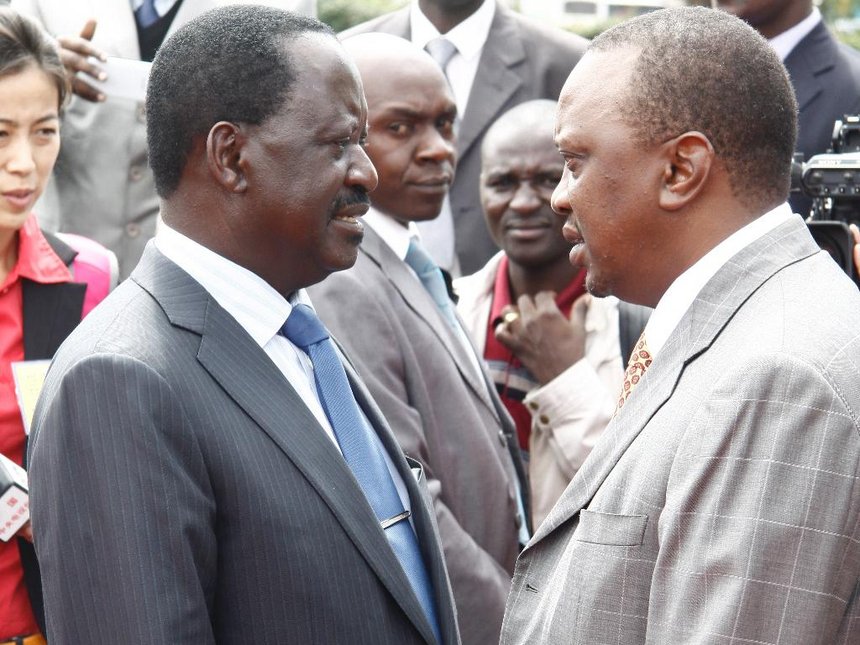 Campaigns for 2017 General Elections have unofficially been kicked off with political train gaining momentum by the day. Jubilee aŕe on massive development projects launching across the country and with the timing months to the election, they’re capitalizing on this loophole to score political points.

The opposition, on the other hand, is witnessing political realignment with a mission of having a united opposition capable of sending Jubilee home in the same taste that Rainbow Alliance ganged up to end Moi’s 24-year rule.

Jubilee regime has been rocked with significant corruption dealings painting it as one of the most corrupt governments of the four that Kenya has had. Human rights violations as extrajudicial killings that have snatched many lives have also headlined the administration.

Perhaps the most outstanding are the systematic clampdown on freedom of press and expression. In the last years of Jubilee regime, press freedom has been lowered in an index with draconian laws meant to muzzle information flow. The government has been critical of the media alleging they’re misreporting painting it as corrupt which in the real sense is the truth.

A Nation Media Group journalist was in trouble on exposing a scandal in tendering at the Interior Ministry. What followed is evident. They came up with another clamping law that required journalists to give evidence on corruption. The President and deputy are on record calling out the media on several occasions as useless reducing newspapers to mere meat wrappers.

The government hasn’t been soft on investigative journalists and bloggers many of whom have faced their wrath. Recently, a British journalist to The London’s Time was deported under unclear circumstances reports now indicating he was probing the Eurobond case that allegedly cost taxpayers billions spent in nonexistent projects.

The targeting of media by the regime has exposed their dictatorial motives an indirect attack to freedom of speech and press which are vital in a progressive and democratized nation as Kenya.

Under the four years that Jubilee have been in power, we’ve witnessed extreme public funds looting like never before. Some of these people are new to this corrupt money which then directs me to the fears that Jubilee might not let go power that quickly. Four years wouldn’t be enough they’ll probably fight to last blood drop to retain power for another five years to finish up work (read looting) started. I have certain key points that are red flags as we move close to the polls.

There has been a sustained campaign to pull Kenya out of the Rome Statute. Like many of Africa’s dictatorial regimes have been yapping that the court is a political establishment targeting Africa, but they don’t tell you that it’s Africa’s leaders who reign more terror on their citizens. The fear of ICC contributed mostly in taming possible violence in the last election in Kenya. Imagine a scenario without ICC and no fear over facing international justice. Gambia’s President who’s now refusing to let go power after the huge loss at the same time preparing grounds for the serious clash in the country hurried to pull his country out of ICC months to the election. They only want ICC out if the way to reign terror in citizens without limitations. The cosmetic sovereignty calls are like music to dead ear. Sovereignty while Africa governments run on donor money.

If you’ve been keen, the CSOs have been Jubilee’s top enemies. This is mainly contributed by the active participation of the CSOs on the ICC cases that had President and Deputy dragged to the Hague. It’s their belief that the cases were coined by the Civil Society whom they’ve branded as the evil society despite the fact that most of the CSOs items in ICC were drawn from the State’s intelligence agencies.

On Jamhuri day celebrations, the president gave the biggest hint that the Civil Society is under attack with the possible shutdown of many. The President accused the CSO for working with foreign powers to change the regime. Ironically the president telling off foreign powers from influencing elections yet IEBC conducting the elections is funded by the Western countries don’t even go to the security dockets and all.

The mood in the country and hostility towards Jubilee has been frustrating the son of Jomo now issuing warnings everywhere. It’s also not a coincidence that Civil Society has been removed from devolution to interior ministry under colonialist Nkaissery. This is a strategic plan to control and muzzle the CSO as elections nears. The NGOs play the major role in voters education and empowerment. With a weakened Civil Society, Jubilee will have a field day with atrocities which when you look at how police have handled protests in recent cases should worry you.

There are credible fears that Jubilee would shut down the internet in the same style that has been replicating in most African countries. From Uganda to Gambia and now Congo shutting down the internet as Kabila plots to forcefully extend his term and fears of violence eruption.

The fallacy that social media causes violence is not only pathetic and primitive thinking but an insult to civilization. Other day a pseudo-journalist, a self, imposed presidential reporter with the Star opened his mouth ahead of his brains calling for social media shutdown over irresponsible posts. This a journalist mark you who should be advocating for the free press and speech. But let’s spare the man as he comes to terms with the fact that his friends have been helping in taking care of his wife.

Jubilee should have least worry with the internet and work towards giving a credible election that will be the sure way. Kenya is a time bomb waiting for a single wrong movement, and things will go wrong. Shutting down the internet would cause a revolt, it will send out a signal that some fraud scheme is in the oven even if it’s not the case.

Social Media has a therapeutic effect in that people will vent online instead of picking weapons and slashing each other. It’s not an expensive way to deal with the situation. The keyboards will take away the anger. But the most important thing is to have open, credible elections. Don’t disrupt the peace. Whoever is advising Jubilee to shut down the internet should ask themselves if past poll violence happened because of social media. Free advice, focus on the vernacular radio stations which are dangerous tribal fueling agents, a clampdown on loose cannons the bark dogs of politicians the war mongers, fraud electoral officers. Leave social media alone and for the millionth time, conduct credible, open, Free and fair elections and won’t have to worry for a great poll results from reception. The way Jubilee has invested on anti-riot police in recent times is a story for another day.

Miguna: The Elections Will Not Be A Selection Process Of Picking The Best Clown, Machiavellian Opportunist Or Karl Marx’s Clone (A Rebuttal)