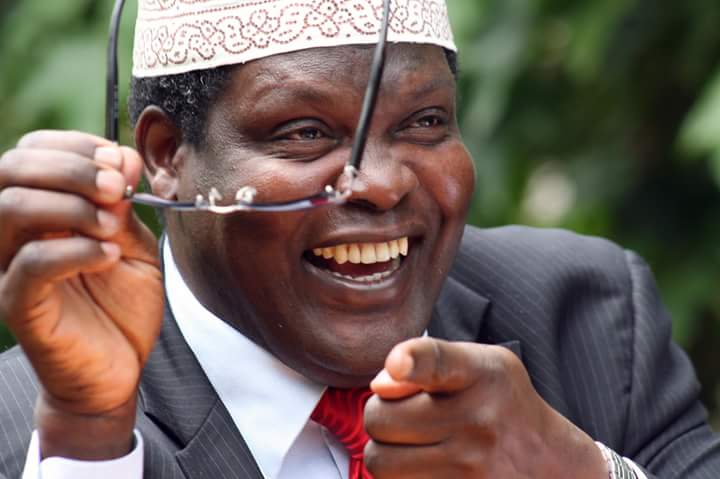 She claims that she is part of my movement against the cartels and admits, grudgingly, that I’m the best candidate for the position of governor of Nairobi.

She correctly acknowledges that all my opponents are “a basket of deplorables” – a cocktail of thieves, plunderers, hypocrites and drug peddlers. However, she has not written a single line excoriating the Nairobi cartels.

Instead, Ms. Maritim-Maina has engaged in magnificent logical contortions and ploughed acres of space with her poisoned pen transfixed on the general leading a revolutionary movement to clean up Nairobi.

She states – without any shred of evidence – that I will not win. She seems pleased with her baseless prediction without realising that it sharply contradicts her assertion of being a member of my revolutionary movement.

It’s a shame that reason and logic are clearly not one of the strengths of this supposed “PhD Candidate in Political Economy!”

When a student of politics on the verge of being bestowed with a terminal academic degree argues in such a meandering manner, sensible citizens should be extremely worried. Logic is, after all, the pith and substance of academic disputations.

In elegant parlance, Daisy Maina’s inconsistencies may be termed unmeritorious. But in plain language, they are called transparent lies.

Why is Daisy duplicitous?

Why does she sound happy that the transformative vision I’ve outlined in my manifesto such as an integrated modern solid waste management system; a modern Light Rail Transit System; a Subway/Underground System; affordable housing for the poor; markets for hawkers; well-constructed roads; scholarships for bright students; and an unprecedented employment initiative for the youth will not be realised if I do not win as she has cynically predicted?

Why, indeed, are elites like Daisy Maritim Maina happy with the status quo that has plundered, exploited and impoverished Kenyans for the last 55 years?

Why do Kenyan elites feel more threatened by the visionary transformation I propose rather than the current plunder that has rendered more than 90 per cent of Kenyans destitute?

Are hypocritical Kenyan elites fearful that a cleaned up and transformed governance system will eliminate fraudulent contracts that they have thrived on for 55 years?

Ms. Maritim-Maina argues that an unemployed but well-dressed graduate who only recently got placed as an intern – not gainfully employed – is not poor.

The idea that the type of dress one wears determines his/her economic/financial security or independence is a primitive socio-economic poverty index. This unedifying third-worldview was dramatically displayed when the billionaire Facebook Founder and CEO Mark Zuckerberg visited Kenya a few months ago and wore a pair of $45 jeans and $20 T-shirt but the struggling Kenyan hasslers that chaperoned him around Nairobi were clothed in expensive looking attire.

Yes; I’m not Karl Marx, Frederick Engels, Fidel Castro, Che Guevara or Amilcar Cabral. I’m not a revolutionary clone. I’ve never identified myself as any of these revolutionaries except as one of their loyal and committed soldiers.

Daisy argues that because I was physically attacked in Kisumu by a mob who had not read the book they claimed they were aggrieved by, I’m not a revolutionary. Set aside the issue of Daisy’s obvious confusion over the sequence and details of the incidents she purports to be writing about. One thing is crystal clear: I’ve never run away from opportunistic attacks whether they are physical or pseudo intellectual.

Related Content:  Killing Of Baby Samantha Pendo Is A Dark Reminder Of The Police-Cum-Militia For Luoland

She derisively called my memoirs “a book of secrets.” The only “Book of Secrets” I know of is the celebrated novel by my friend MG Vassanji.

Facts are stubborn and no one is entitled to their set of facts. Che, Cabral, Patrice Lumumba, Samora Machell and Thomas Sankara were not just physically attacked worse than I had been; they were brutally assassinated by the enemies of our people. Even Fidel was repeatedly attacked, jailed and tortured before his forces triumphed in 1959.

One does not cease being a revolutionary because s/he has been physically molested, harassed, defamed, scandalised or murdered. Being physically attacked by misguided mobs is not a sign of the victim’s weakness. It’s a sign of the mob’s mortal fear of the person they are attacking. Weak people are ignored.

Although I’ve never called myself “El Commandante;” the title isn’t reserved for anyone.

I’ll not publish PR images with starving children in slums for me to prove my revolutionary bona fides.

When a supposed PhD candidate argues the way Daisy does, it exemplifies the fact that it’s not just our politics that requires urgent reconstruction; our educational system, too, needs a CPR.

The 2017 general elections will not be a selection process of picking the best clown, Machiavellian opportunist or Karl Marx clone. It will be an election!

Present coherent arguments based on facts against my ideology, vision, policies and programs.