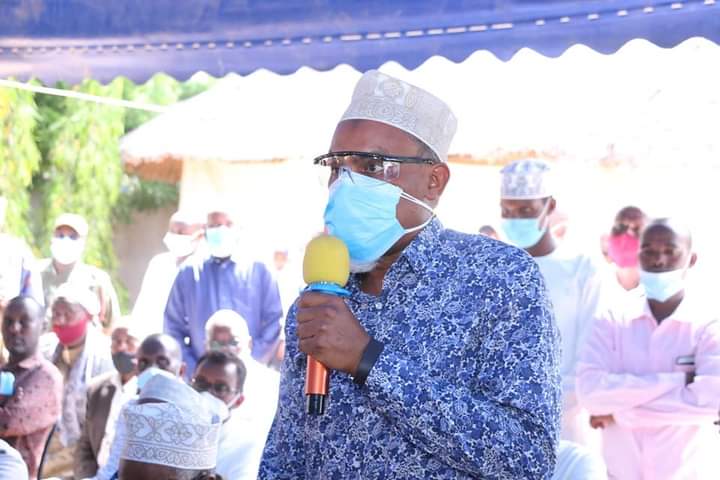 A six months’ salary of the late Garissa senator Mohamed Yussuf Haji that he earned while sick  will be shared out to the families of less fortunate in the six sub-counties of Garissa county.

Delivering his father’s last wishes in an emotional speech at a Garissa hotel Friday, the director of public prosecution Noordin Haji said his father regretted that for the period, he could not serve his people because he was unwell.

Noordin who on several occasion had to cut short his speech as he was overcome by emotions, narrated how his late father battled with the illness before eventually succumbing on Monday at the Aga Khan University in Nairobi.

“As a family we have lost not only a father but a pillar that glued us together as a family unit,” Noordin said.

“Going forward we intend to donate our late father’s six months’ salary that he earned while indisposed to orphanage centers in the six sub counties in Garissa. The monies will be handed over to the Kenya Red Cross who will reach out to the families,” he added.

The DPP said that when the health of their father deteriorated, the late Haji made some wishes to the family for the people of Garissa County, one of which was to have the money offered to the less fortunate.

Haji said the family travelled all the way to Garissa to thank the area residents for standing with the family, praying for his departed soul as well donating to the less fortunate in the society.

Related Content:  Nobody Can Stop Reggea: Raila Says He’s Not Worried With Court Petitions And That BBI Will Sail Through

He also thanked the residents for their overwhelming messages of condolences after the loss.

“As a family we will also try and complete all the projects that our late father had started. We will walk this journey together. That I can promise,” Noordin noted.

He also took the opportunity on behalf of the family to ask for forgiveness from all those who may have crossed paths with his late father as he went about executing his duties.

Noordin thanked President Uhuru Kenyatta and all the leaders who stood with family during his late father ailment.

Garissa governor Ali Korane on his part said that the county will work closely with the family in ensuring that that all the incomplete projects that he had initiated are finalized.

Korane further said that the county would look for ways of remembering him noting that naming an institution or a street after the late senator was an option.

Isiolo governor Mohamed Kuti appealed for the two counties to strive and find lasting peace as a way of honouring Mzee Haji whom he said was on the forefront in uniting warrying communities.

In his condolence message that was read by CS Ukur Yatani, President Kenyatta described the late Haji as an outstanding leader who served the country with commitment throughout his life.

Uhuru said at a personal level, Mzee Haji walked with him throughout his political life noting that he benefitted immensely from his wise counsel.

“I always held very constructive and candid discussions with Mzee Haji on my various political maneuvers and most fundamentally on the future of this country. His personality and strength of character was best manifest to me as my political mentor,” the speech read in part.

The family is set to travel to his rural home town of Malani, Ijara sub-county to hold similar prayers as well as thank the residents whom he represented for two terms as an elected MP and once as a nominated MP.

EACC Goes After Baringo MCAs Who Voted Against BBI Bill