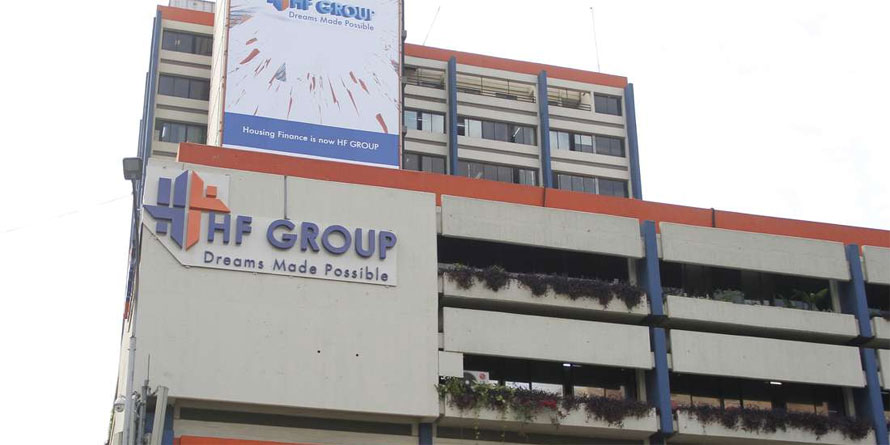 In march 2007 HF set up a project Finance team to provide solutions and financing for the growing base. On the 11th July 2007, CDC Plc (the single largest shareholder in HF at the time) sold its 24.9% interest in HF to Equity Bank Limited and British American Investment Company Limited (BAICL). The shareholding stood at 7.32% GoK, 20.0% EBL, 4.9% BAICL, 7.87% NSSF and 59.91% to the public and Property Point, a one-stop shop for property developers, estate agents, suppliers of housing and construction materials and property buyers to acquire property under one roof, was set up. HF was growing into a big firm with most Kenyans opting for their services.

In 2010 HF successfully raised Ksh 7 billion which was the first tranche of a Kshs. 10B offer – from the bonds market to fund business growth. The Bond was oversubscribed by 41% from the original target of Kshs. 5B. In 2013 HF innovated a new solution, Ezesha, offering 105% mortgage financing, allowing customers to access mortgages to enable home ownership for more Kenyans

In August 2015 the Company received approval from the Central Bank of Kenya (CBK) to establish a non-operating holding company and rebranded from Housing Finance to HF Group Limited. The banking and mortgage business was transferred to HFC Limited, while the Kenya Building Society rebranded to HF Development and Investment Limited.

Related Content:  It’s The End Of The Road For Kiambu Governor Ferdinand Waititu

In the years leading to 2019, HF profits would stagnate, decrease exponentially and finally the firm would report it had made losses for the first time in a decade in 2018. Once a bastion of hope for thousands of long-suffering borrowers in the real estate market, HF management would manage (no pun intended) to bring the company to it’s knees. The company would be named in countless scandals like the Kshs. 2 Billion IT Procurement Scam.

In 2016, hurt by reduced property sales, the company’s net earnings stood at Sh905.8 million in the period compared to Sh1.1 billion a year earlier a massive 24.32 per cent decline. Mr. Ireri said the company’s property development unit HFDI has Sh1 billion worth of transactions tied up at the lands ministry where operations have slowed down also blaming slow property transactions on the 51.1 per cent jump in gross non-performing loans to Sh6.1 billion, leading to 38.7 per cent rise in loss provisions to Sh699.1 million. HF declared a dividend of Sh0.5 per share, down from previous year’s Sh1.3 per share.

Mr Ireri in a statement promised that the company would perform better in the last quarter of the year  2017 when two of its projects — Komorock Heights and Richland — were completed. This would not be the case however as the company continued to struggle.

In mid 2018, HF board chairman Steve Mainda in a letter sent to Capital Markets Authority (CMA) stated Mr Ireri would not be renewing his four-year contract that would end in March 2019. Mr Ireri’s had been sacked, he would be replaced by former NIC Bank Director for Retail Banking Robert Kibaara. This came at a time when HF had started experiencing a sharp decline of its after-tax profits. In March, the firm reported a Sh126.22 million after-tax profit for the year ended December 2017, representing an 86.07 per cent slide from the previous Sh905.83 million.

Related Content:  What It Means For Martha Karua To Throw Her Weight Behind Uhuru Kenyatta Presidency

By the time of his exit, Mr Ireri’s salary had risen to Sh64.4 million in the year ended December 2017, from Sh64 million the previous year. At Sh64.4 million, his pay was equivalent to 51 pc of HF’s net profit in the year ended December 2017. Mr Ireri’s compensation comprised a basic pay of Sh44.4 million or Sh3.7 million per month, gratuity of Sh13.7 million, and non-cash benefits of Sh6.1 million. He was dragged on social media and blog sites for his transparent involvement in fraud, insider lending and corruption within the company.

HF issued a profit warning for the year ended 31 December 2018. The firm blamed the poor performance on downward revision of central bank rate, and increase in cost due to redundancy exercise that took place during the year. HF Group had earlier posted a Ksh332 million loss after tax in the nine months ended September 2018, this would be the first time the company had dropped into loss for in more than 10 years on reduced interest income.

The listed firm  would then go on to post a net loss of Ksh598 million in the year ended December 2018, down from Sh126 million net profit it had made the previous year. The tier-two lender had seen its interest income drop by Sh1.08 billion to Sh6.045 billion as it struggled with reduced income from customer loans which dropped by 15 percent to Sh5.661 billion.

Mid 2019, HF listed customer houses worth an estimated Sh2 billion for sale pointing to widespread distress in the real estate sector. The listing reflected the struggles that the mortgage financier is going through. The lender is yet to release its half-year, 2019 results, but we can expect bad if not worse than the losses it made last year.

Clutching at straws, HF has now launched a WhatsApp banking solution that is supposed to offers customized mobile services to its customers if not false hope. Customers will now be able to  interact with the bank on WhatsApp for services such as account opening, funds transfers, loans, bill payments and goods purchases. HF is targeting to milk the increased use of mobile phones and internet in Kenya by introducing the services on WhatsApp since 84percent of the Kenyan population has access to the internet.

With the latest profile reading that Housing Finance Group dropped into loss for the first time in more than 10 years on reduced interest income that the mortgage lender previously blamed on the rate cap and a tough economic environment.

The listed firm posted a net loss of Sh598 million in the year ended December 2018, down from Sh126 million net profit made the previous year.

The tier-two lender saw its interest income drop by Sh1.08 billion to Sh6.045 billion as it struggled with reduced income from customer loans which dropped by 15 percent to Sh5.661 billion.

With HF Group CEO Robert Kibaara on board, question on many minds is would he be able to resuscitate the firm that’s now on a life support literally? Well, this is a question that only time will tell. What’s is for sure is the firm needs not only reinventions but prayers too.