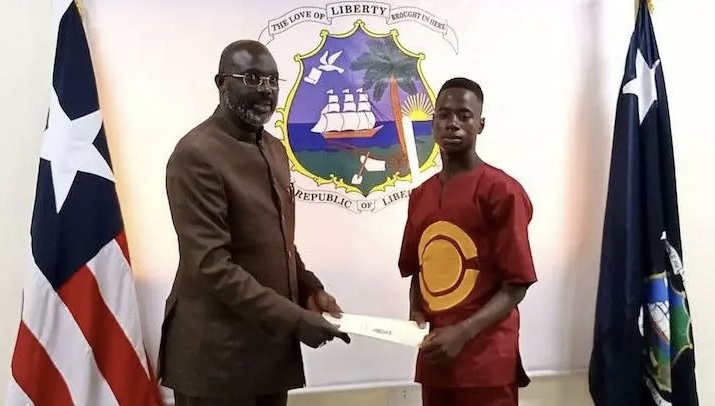 More blessings pour in for Liberia’s honest teen as he has been appointed as “integrity ambassador” and placed on $500 monthly salary after his kind gesture towards a business woman caught the attention of the country’s President, George Weah.

The Nineteen-year-old Emmanuel Tuloe became a subject for discussion after he found and returned the sum of $50,000 to a businesswoman. Following the reports, President George weah invited and rewarded him with the sum of $10,000, a scholarship up to master’s level plus other additions.

During his earlier meeting with the president, Emmanuel was promised an honour in the order of distinction. However, the position was not clearly defined until his recent appointment into the ambassadorial position.

Explaining how the incident occurred, the young man told reporters that, “one day passed when they were discussing about the money, and the woman was crying and begging the person that found the money to bring it back, and I went back to my aunty and told her that the money I gave her, they are asking for it so we took it back to the woman.”

His kind gesture received massive admiration from the public. The best part of his story is that, the young man is not from a rich home, neither is he rich. Emmanuel drives taxi and rides motorbikes for a living; a situation which amplifies the value of his kind gesture.

According to the Liberian authorities, the special treatment offered the teenager in recognition of his exemplary gesture has a tendency to set a good example for other teenagers in the West African country.

Related Content:  Rwanda Signs American Rapper J. Cole As Their Player For Basketball Africa League
Kenya Insights allows guest blogging, if you want to be published on Kenya’s most authoritative and accurate blog, have an expose, news TIPS, story angles, human interest stories, drop us an email on [email protected] or via Telegram
Related Topics:
Up Next