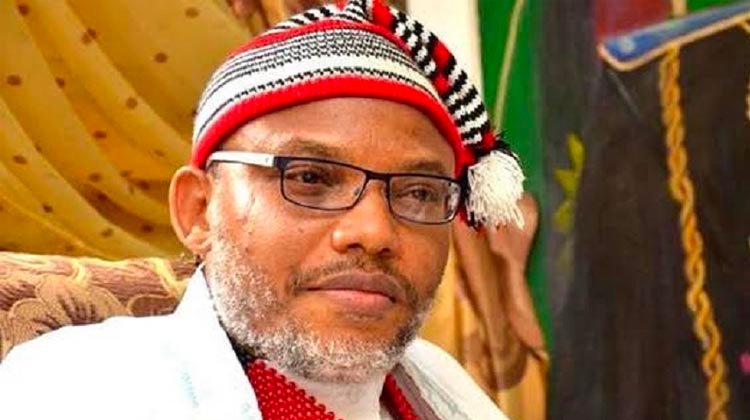 The United Nations has stated that it is alarmed by the refusal of the Nigerian government to respond to its “concerns” on the detained leader of the Indigenous People of Biafra, Nnamdi Kanu, and the designation of the group as a terrorist group by the Muhammadu Buhari government.

A UN document, dated, August 26, 2021, according to the document seen by Kenya Insights, the UN said it received information on allegations of enforced disappearance, arbitrary detention, torture, and ill-treatment of Nnamdi Kanu by Kenyan Security Officials, as well as his illegal rendition to Nigeria to face trial for terrorism-related charges, which were believed to be linked to his leadership of the Indigenous People of Biafra.

In the document , the UN said, “In this connection, we would like to bring to the attention of your Excellency’s Government information we have received concerning allegations of enforced disappearance, arbitrary detention, torture and ill-treatment of Mr. Nnamdi Kanu, by Kenyan security officials, as well as his illegal rendition to Nigeria, to face trial for terrorism related charges, which are believed to be linked to his leadership of the “Indigenous People of Biafra (IPOB)” group.

In May 2021, Mr. Kanu travelled to Nairobi, Kenya. On 19 June 2021, he went to pick up a friend from Jomo Kenyatta International Airport and was allegedly abducted. For the next ten days, Mr. Kanu’s fate and whereabouts were unknown.

“It was later reported that during his enforced disappearance, Mr. Kanu had been arrested at the airport’s parking lot, by a group of armed men in uniform believed to be Kenyan officials, without warrant or judicial order, who handcuffed and blindfolded him and pushed him into a vehicle. He was then taken to a private house, where he was detained for 8 days and allegedly subjected to torture and ill-treatment.

During this period, Mr. Kanu was chained to the floor at all times, regularly beaten with a cloth over his mouth to prevent him from screaming, taunted and called a “terrorist Jew Biafran”, denied access to bath and toilet facilities, requiring him to urinate and defecate where he was chained, and was fed bread and water once a day.

After 8 days of arbitrary detention in Kenya, Mr. Kanu was driven to the tarmac of the Jomo Kenyatta International Airport, handed over to Nigerian security officials, without any form of extradition or judicial process, and taken aboard a private jet to Abuja, Nigeria. On 29 June 2021, Mr. Kanu appeared before the Nigerian Federal High Court, in Abuja, in handcuffs and leg restraints, and was arraigned, without access to legal representation, based on previous charges brought against him in 2015.

Since his arrival to Nigeria, Mr. Kanu has been detained in solitary confinement at the DSS detention facility in Abuja, and denied visits from his family. On 1 July 2021, the British High Commissioner in Nigeria requested information from the Attorney General regarding the circumstances of Mr. Kanu’s arrest and transfer from Kenya to Nigeria, and consular access. Both requests were rejected or left unanswered,” the UN lamented.

Since his rendition to Nigeria, Mr. Kanu has been allegedly detained by the Department of State Services (DSS), and denied family visits, confidential access to a lawyer, and necessary medical treatment for his underlying health condition.

Kenya Insights allows guest blogging, if you want to be published on Kenya’s most authoritative and accurate blog, have an expose, news TIPS, story angles, human interest stories, drop us an email on tips.kenyainsights@gmail.com or via Telegram
Related Content:  Presidents from war-torn countries in Kampala for Museveni oath
Related Topics:
Up Next

Teen Who Found And Returned Sh50M Cash To Owner Feted