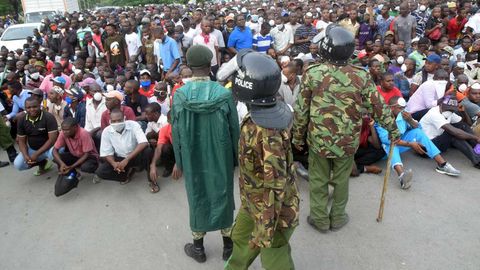 The victims urged the enforcement of the dusk-to-dawn curfew imposed in March was brutal, unreasonable and disproportionate.

The NGOs claim police shot at innocent Kenyans, rounded up, lobbed teargas at innocent members of the public and mercilessly beat them up.

The victims in the petition filed by the NGOs include a 13-year-old who was murdered by police. The petitioners told the court the minor posed no threat to the police.

So far, only one police officer has been arraigned in court over the killing of Yassin Hussein Moyo, a 13-year-old boy, in Shauri Moyo.

Moyo was standing on his family’s balcony when he was shot in an incident police termed as an accident.

The petitioners argued they were aggrieved by the fact that police meted out violence without justification.

The petitioners implored the court to find there was no justification for the excessive force used by law enforcement officers.

“The COVID-19 pandemic and the subsequent restrictions including curfew orders does not and did not suspend constitutional rights protecting persons against unreasonable use of force by the law enforcement officers,” court papers read.

The victims told the court they had suffered immense mental and physical injury further stating that the hopes and dreams of living a fulfilling life have been dashed.

Related Content:  Health Workers, Elderly And Teachers To Be Given Priority In Covid-19 Vaccine

The family of the slain teenager sought Sh17,000 as burial fees while another petitioner identified as Joseph Simiyu asked the court to grant him Sh 120,000.