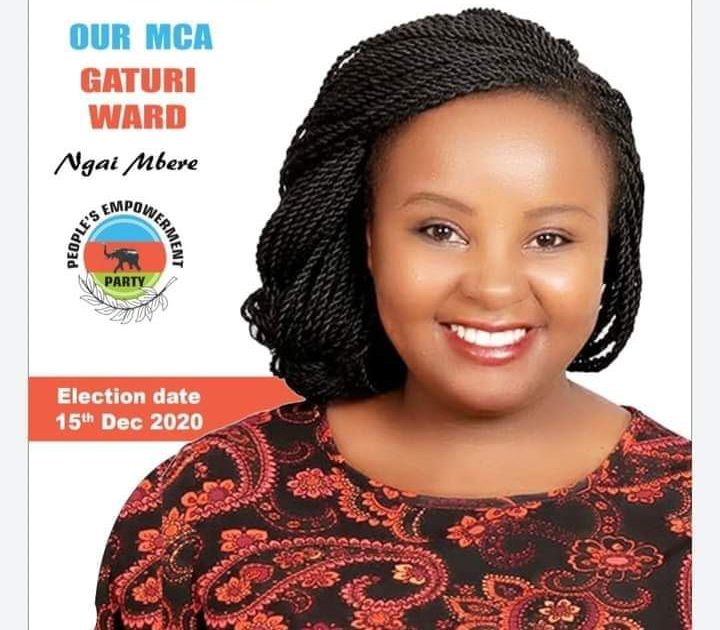 A youthful candidate from Murang’a county, sponsored by the little known People’s Empowerment Party has surprised many after clinching the Gaturi ward representative seat in the just concluded by-elections.

Wakuthie who served as area MCA between 2013 and 2017 garnered 3, 423 and was followed by Zablon Mwangi of Narc Kenya with 1, 024 votes.
The returning officer Faith Mugo handed over a certificate to Mwihaki as she appreciated the people of Gaturi for engaging in peaceful elections.

Mugo said the turnout was about 50 percent saying the ward has 18, 834 registered voters.

Mwihaki crossed over to the People’s Empowerment Party which is associated with Gatundu South MP, Moses Kuria after she was defeated by Wakuthie in the Jubilee party primaries.

“I would like to thank the people of Gaturi for giving me this opportunity to represent them in the remaining time of the term. I also laud members of my family for supporting me in the campaigns,” said Mwihaki after she was declared the winner.

The seat was left vacant last September after the death of Kiiru Membe Mwangi who had also been elected as an independent candidate in 2017.

Kenya Insights allows guest blogging, if you want to be published on Kenya’s most authoritative and accurate blog, have an expose, news TIPS, story angles, human interest stories, drop us an email on [email protected] or via Telegram
Related Content:  Nyong'o recycling left-overs in his 2022 re-election scheme
Related Topics:
Up Next