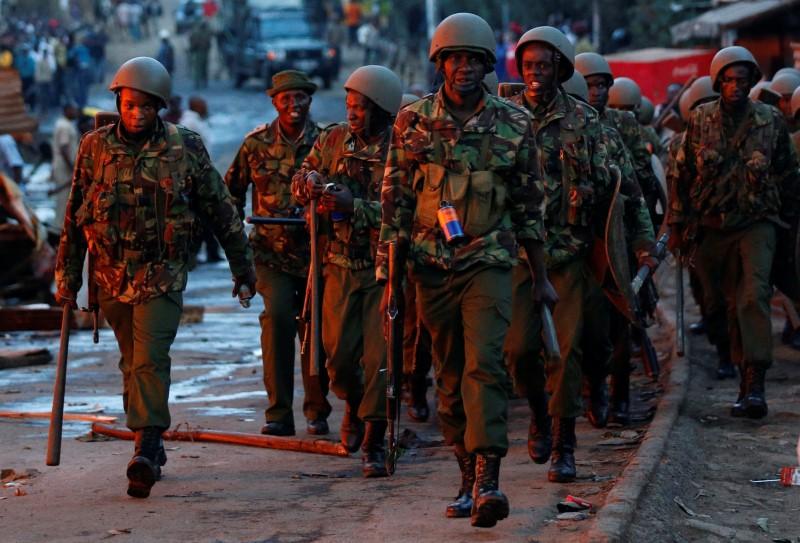 Anti riot police officers patrolling in Nairobi during the heights of violence.

NAIROBI — In a statement about Kenya’s Oct. 26 election released today, The Carter Center urged Kenya’s political leaders to engage in constructive dialogue to bridge the gap between the opposition and ruling parties, and their respective supporters, following a tense electoral period.

Kenya’s fresh presidential election, scheduled following the Supreme Court’s annulment of the Aug. 8 race, unfolded in a context of heightened tensions stemming from the protracted electoral process, confrontational tactics and harsh verbal attacks by key political leaders, and outbursts of violence around election day. These problems severely undermined the ability of Kenya’s electoral and judicial institutions to implement the fresh presidential elections. Rather than consolidating support for a national political program, the election polarized the country and exposed the deep tribal and ethnic rifts that have longed characterized its politics.

Regrettably, the actions of Kenya’s political leaders served to weaken its democratic and independent institutions, constrain the ability of citizens to participate in the civic affairs of their country, and damage the nation’s democratic development. In the days ahead, it is incumbent on political leaders to put personal agendas aside and take steps to heal the country while maintaining the country’s constitutional order.

Today’s statement provides an initial summary analysis of political and electoral developments between the Aug. 8 elections and the fresh election held on Oct. 26, based on the reporting of the Center’s core team of experts and long-term observers who were on the ground for the Oct. 26 poll. We note that the electoral process is not yet complete, as electoral disputes are pending in the Supreme Court. The Carter Center will release a comprehensive statement on the overall election process after its completion. A detailed final report will be published in early 2018.

The Carter Center has had a core team of experts in Kenya since April, monitoring key parts of the electoral process, including voter registration, campaigning, electoral preparations, and the recent resolution of disputes in the courts. That team was joined by a large group of observers who helped monitor voting, counting, and tallying in the days surrounding the Aug. 8 election. Following the Sept. 1 decision by the Supreme Court to annul the August election, the Center was invited by the IEBC to extend its presence to observe the Oct. 26 fresh election. Long-term observers rejoined the core team on Oct. 4 and were deployed to various locations in the country to observe critical pre- and post-election processes.

Because of insecurity surrounding the polls, the uncertain political environment, and the lack of a fully competitive election, the Carter Center deployed a limited election observation mission to assess the Oct. 26 polls. The team was limited in size and geographic scope. Given these factors, the Center did not conduct a robust assessment of polling station level processes on election day.

Read the full statement below