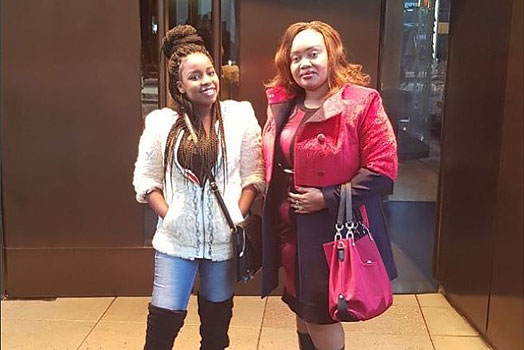 Saumu Sonko and Primrose Mbuvi pictured during their trip to New York in March 2018.

Nairobi Governor’s Sonko first appearance before the Senate in his impeachment hearing was nothing but a stream of bizarre stories that exposed how the governor allegedly used county funds to find his opulence.

Sonko was impeached by the assembly two weeks ago, with 88 MCAs accusing him of gross violation of the Constitution, abuse of office, gross misconduct and crimes under international law.

While tabling evidence for the ouster of the governor, County assembly Minority Leader Michael Ogada averred that Sonko flew his daughter Saumu Agnes Mbuvi in a first-class flight to the US which translated in the misappropriation of public funds.

The Embakasi Ward MCA who moved the successful impeachment motion in the county assembly alleged that Nairobi County’s first daughter embarked on the trip disguised as a county administrator to purportedly attend the County First Lady’s conference held during the 62nd session of the Commission for the Status of Women 2018.

Ogada told the plenary that the governor’s daughter spent Sh220,000 on a chopper flying around New York City, and another “offside party at Sh260,000 from first lady’s conference in Philadelphia,” where Sh60,000 was spent on the trip.  He further claimed that Sh120,000 was given to reporters and additional Sh300,000 on transport.

Mr Ogada testified that a county official was tasked with withdrawing Sh2.6 million from the county’s account, which she handed governor Sonko’s bodyguard to be used for facilitation by her daughter.

“The Sh2.6 million used on per diem, a junior officer from the county was forced to go and withdraw it using her name in the company of a bodyguard of His Excellency the Governor. After withdrawing the cash, the bodyguard walked away with [money],” Ogada testified.

He further told the  House that part of the money was wired directly to the airline which later processed the air ticket for the daughter.

Nairobi MCAs while presenting their case accused the governor of diverting Sh622 million meant for bursary.

They said using the bursary cash to pay law firms “shows an official who exhibits greed and extravagance when dealing with public resources”.

The bursary scheme was initiated by Evans Kidero and targeted bright and orphaned students in Nairobi. Headteachers are asked to pick two bright students from their schools every year. Each learner gets Sh53,000 as annual school fee.

Sonko was also faulted for breaching public trust he owned up to signing the Deed of Transfer of crucial county functions to the Nairobi Metrpolititan service while drunk. His exchange with Nairobi Woman Rep Esther Passaris also played out as the county chief was accused of using insensitive language towards women.

Governor Sonko yesterday suffered a major blow after the Labour court declined to issue conservatory orders stopping the hearing of his impeachment at the Senate.

In his ruling Justice Nduma Nderi said that he cannot interfere with the senate hearing that is currently ongoing.  He therefore dismissed Sonko’s application and allowed senate to proceed with the hearings to impeach the Governor.

Sonko needs at least 23 senators out of the 46 elected to reject his impeachment to survive.

NMS To Adopt Solar Energy System In Powering Its Amenities