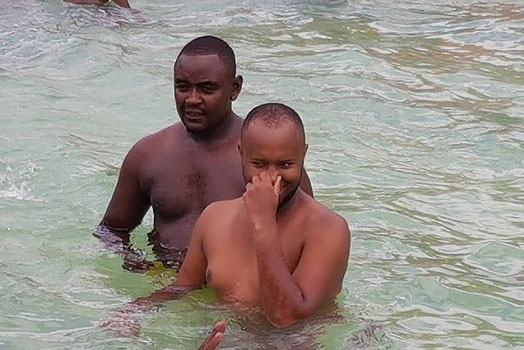 MP Theuri at the swimming pool when it opened.

Known for his flamboyance than anything in the legislative wing, Embakasi West MP George Theuri. Mzalendo.com reported that he spoke 34 times in the House in 48 months. On average an active MP would speak more than 500 times on the floor of the House in five years.

From a Mitumba trader to being an MP for two terms running, Theuri has made himself not only a household name but very popular mostly with the youths going to show his grassroot grip.

With praises, comes underlying issues, case at hand in which the MP is accused of being unaccountable for money raised from a public swimming pool.

The newly constructed swimming pool in Umoja One Primary School open to the public on Saturdays in addition to Sundays has been in operation.

The project, funded by the Embakasi West Constituency Development Fund, has been marred in controversy, with residents questioning the rationale of constructing a swimming pool in a neighbourhood perpetually experiencing water rationing.

MP George Theuri, in his defence, explained that the pool draws its water from a borehole sunk in the school. The swimming pool was intended to host inter-school swimming competitions and is also a recreational establishment for residents.

He added which the pool is actually intended to host inter-school swimming competitions in addition to is actually also a recreational establishment for residents. 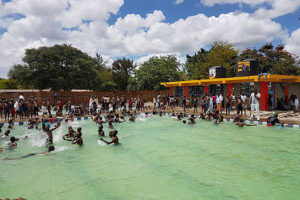 Residents at the swimming pool

On it’s opening, the swimming pool was meant to be free but things seemingly have taken a sharp turn as residents have found out.

The lid has been opened by a resident who questioned as to why the facility was charging residents and more curiously why there’s no official management running the facility and why the money collected remains unaccounted given that no receipts are issued.

The swimming loo which is now called Swimo ya Theuri for one, it’s branded with ‘swag’ his alter ego and with a ghost management which could be his boys, according to the information we have, they’re now charging and collecting Sh100 per session from individuals and Sh5500 for training. Being a public pool in a densely populated area, the amounts collected is in huge figures.

Workers at the pool are utterly rude and don’t give receipts to any of the payments. If the justification for such collections is msinysinscrvof the pool then for a public office you document and account for everything not run such a place like a matatu where conductors collects money without issuing receipts.

This is clearly a corruption scandal that must be immediately investigated by authorities and the MP arrested and charged if he’s linked to this illegality. The pool was a mispriority in the first place as the school is in diplorable state that it needed an upgrade not a swimming pool according to residents who criticized this development.

We’ve also learnt that those who’ve raised this matter on different social media platforms have all been banned in what is suspected to be a clean up exercise and work of the MPs guards to keep negative comments away.

There are accusations running on several Umoja residents pages that the MP has allegedly come up a DSTV sambaza which is a common practice in the estate where the Multi Choice product is hijacked and instead of paying for premium package for every account, one account is used to service several residents. This has led to the company which is struggling to stay afloat against Netflix to make huge losses.

Related Content:  Dealer Horror Stories At The Hands Of Total-Kenya

Theuri is also being accused by some residents of putting up stalls everywhere around Umoja Estate using CDF then turns them into personal assets where one pays a rent of 10k but but have pay a total of 300k to acquire one. Critics are saying this infiltration is turning the Estate into one big slum with disorganization. We have our eyes on the ground and encouraging members of public to send in more scandals relating to corruption in Embakasi and elsewhere we will highlight and expose to the public.

Jacque Maribe Could Be Charged With Murder And Face Life Sentence