In yet another episode of a familiar story, a parliamentary committee has threatened to push for the withdrawal of the operations license for London Distillers Kenya Limited after it failed to install a proper sewerage system.

The National Assembly Select Committee on Implementation chaired by Moitalel Ole Kenta also put the National Environment Management Authority on the spot for giving the alcohol brewer a permit despite it causing extensive pollution in Machakos County.

The Committee is now raising concerns on the issuance of clearance certificates by NEMA.

NEMA Director Dr Mamo Boru Mamo appearing before the National Assembly Select Committee on implementation was asked to explain how London Distillers Kenya was given the go-ahead to continue with its operations.

The Moitalel Ole Kenta led a select committee on implementation is now demanding proper control of pollution by the alcohol brewer.

NEMA is expected to produce a report in the next seven days lest its operation licence is withdrawn.

London Distillers has been embroiled in a dispute with residents of Great Wall Gardens, owned by Erdermann Property Ltd, over claims of emptying toxic waste into Athi River. Residents accused the firm of failing to put in place appropriate technology for waste management.

NEMA is said to have received numerous complaints from the residents of Great Wall Gardens owned by Edermann Property Limited where London Distillers has been blamed for emptying toxic wastewater into the surroundings leading to discomfort and diseases. 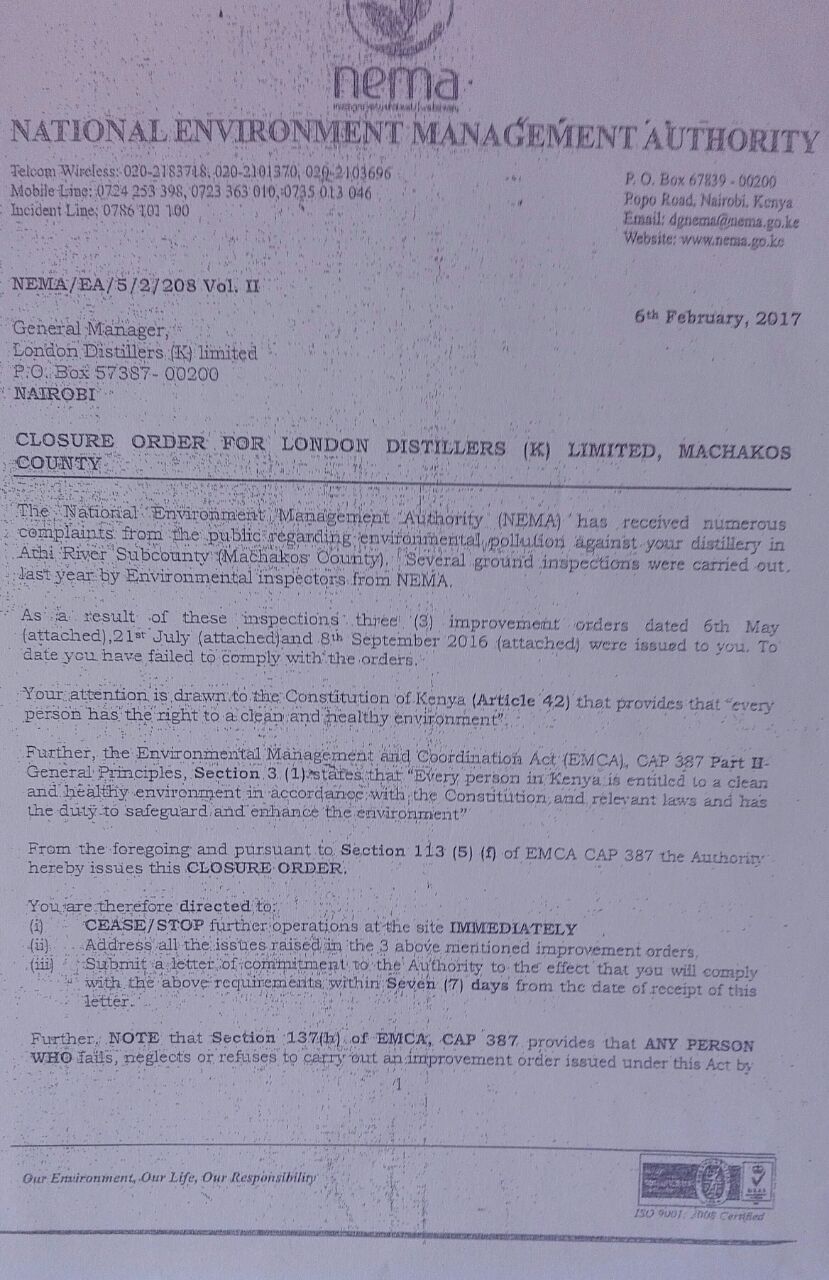 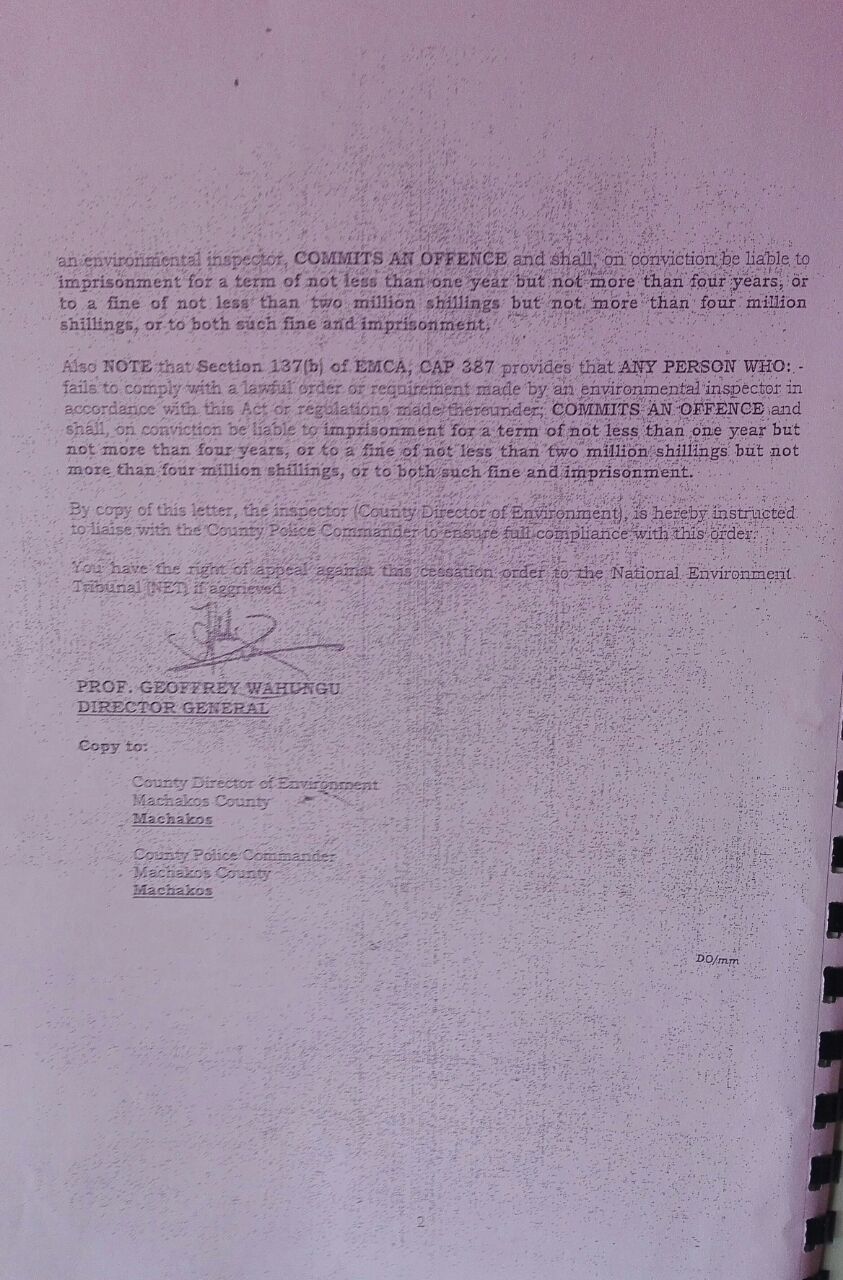 NEMA and London Alcohol LTD have however been taking parliament in rounds or both the three could be accomplices in the same, this is not the first time the parliament has threatened to close the plant, the case keep coming and disappearing.

In 2018, the Parliament’s Environment and National Resources committee had directed Nema, London Distillers, the Machakos government and the Environment Ministry to intervene and stop pollution. It gave London Distillers six months to put in place technology for waste management or stop operations. The period elapsed in March 2019.

London Distillers appears to have coined their ways of survival and continue to operate despite numerous orders from state agencies given they’ve never complied to the recommendations against population. 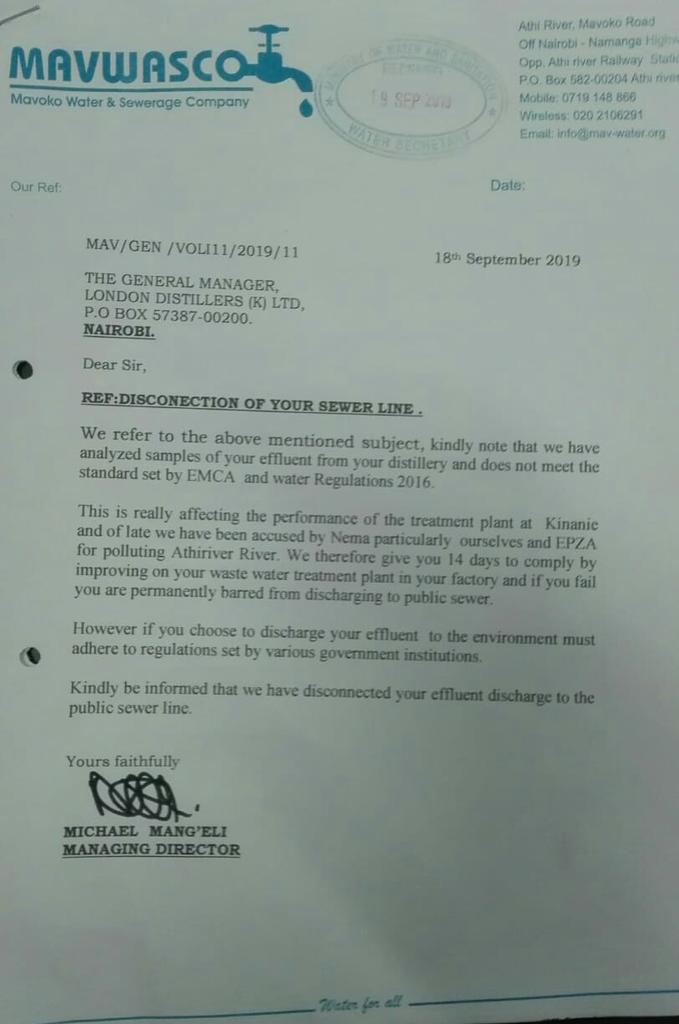 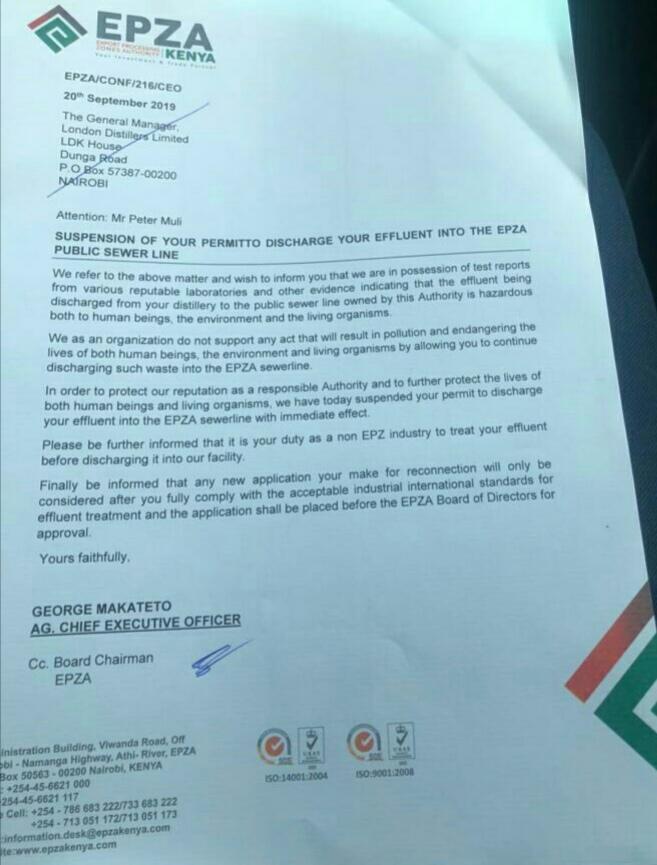 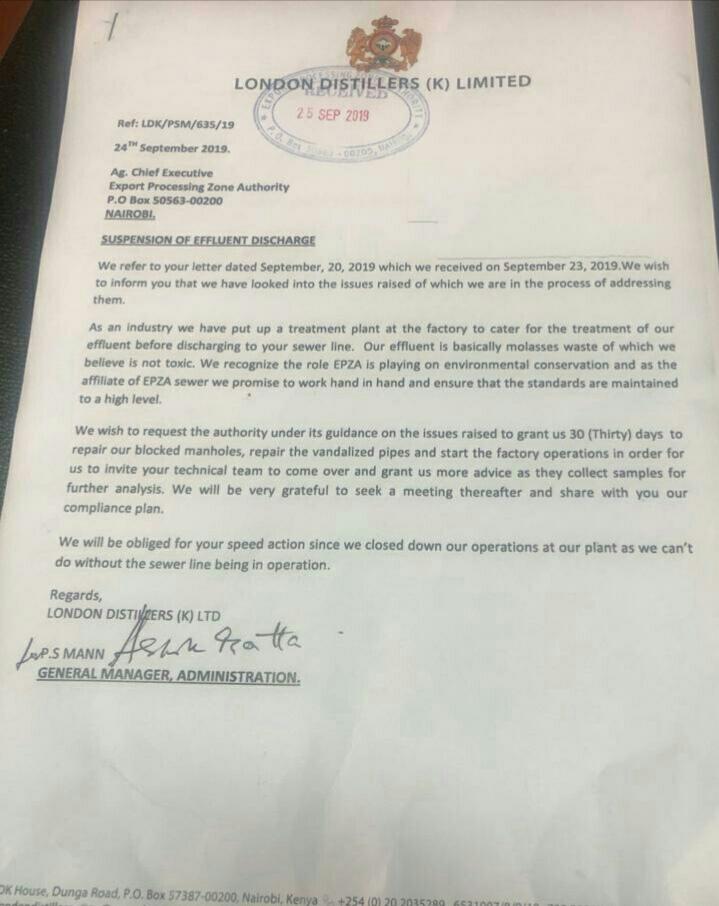 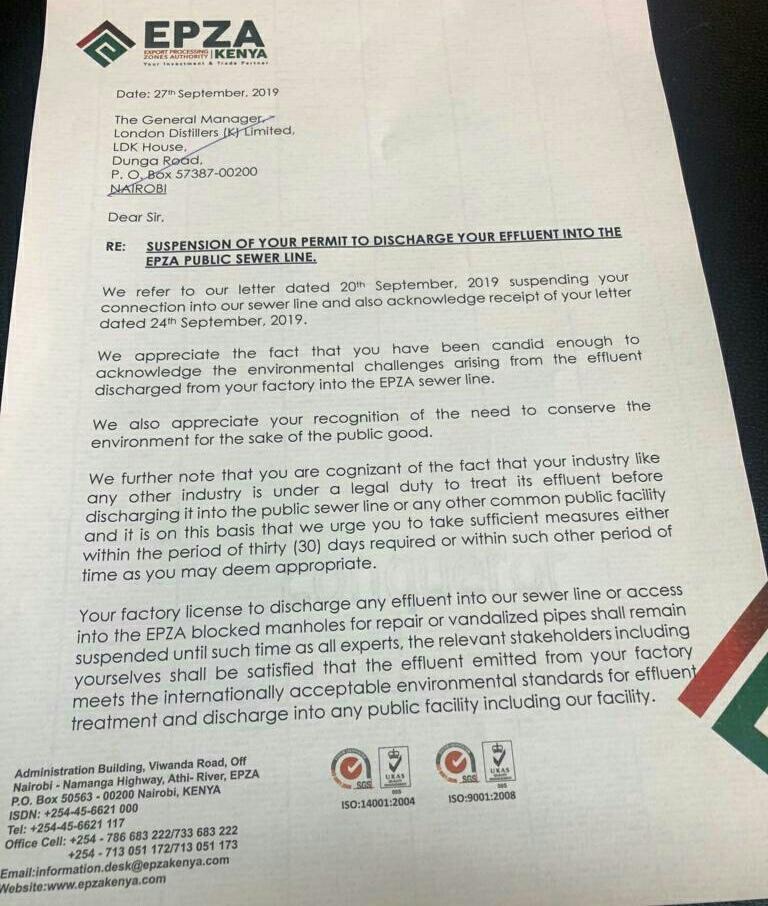 These are just some of the a few many ignored orders. While residents around Athi River continue to getting exposed to the toxicity emitted to the river, parliament and relevant bodies continue to feign ignorance and buying time. 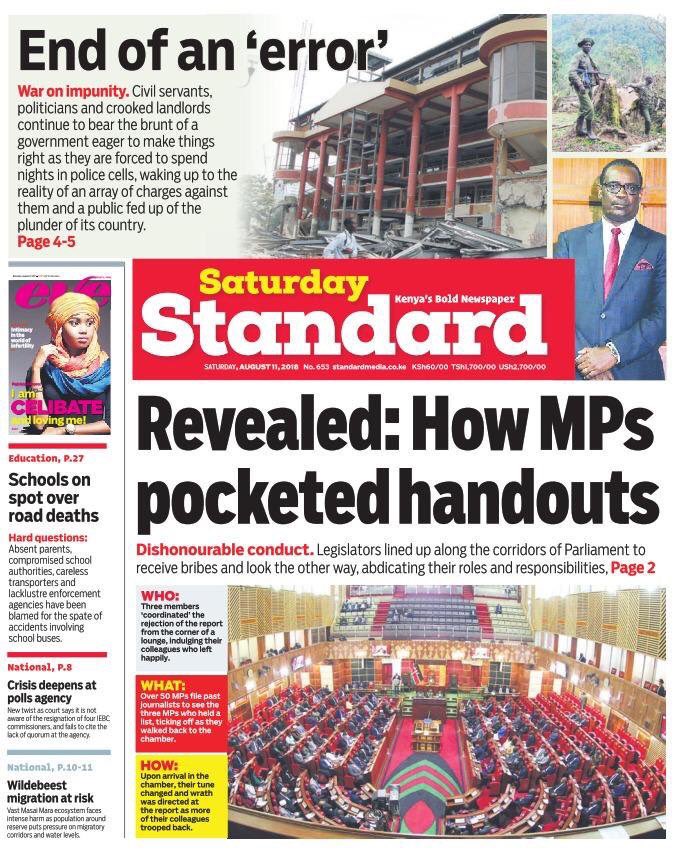 Report says parliament is amongst the corrupt known to take bribes from companies and bodies petitioned.

It won’t be surprising if this latest threat would be one of the many we’ve heard against the environmental hazard company or as usual the owners will figure out the Kenyan way to silence the matter. It appears whenever the public asserts press the case, it resurrects, goes under the same ritual of dying and waiting for the next resurrection. There’s no use of having watchdog bodies if they don’t have balls enough to sort out such matters for once instead prefer to be bossed around by those with big pockets. Could this be the time parliament heed to Uhuru’s words that no one is untouchable or it’s another chance that corruption will once again have a final say? 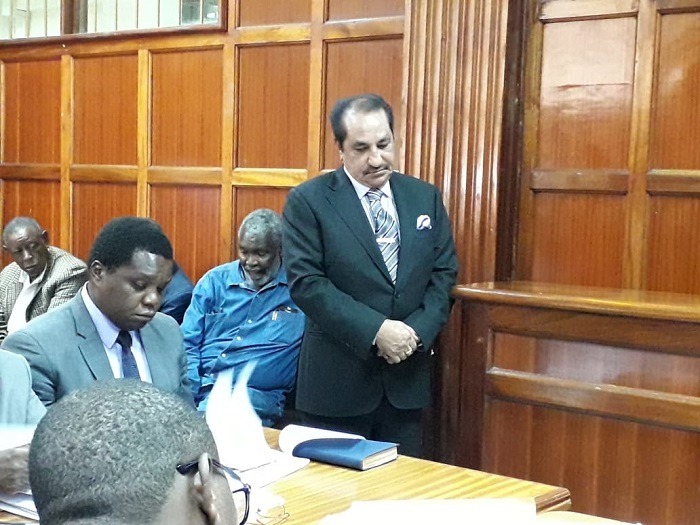 Asian tycoon and founder of London Distillers, Mohan Galot when he appeared in a magistrate’s court in Nairobi in 2018 where he was charged with nine counts of forgery in a viscous battle regarding the shareholding and directorship of the family’s multi-billion shilling group of companies.

Related Content:  Exposed: How Garissa Governor Korane And His Brother Used Family Owned Company To Steal From The Public
Kenya Insights allows guest blogging, if you want to be published on Kenya’s most authoritative and accurate blog, have an expose, news TIPS, story angles, human interest stories, drop us an email on [email protected] or via Telegram
Related Topics:
Up Next