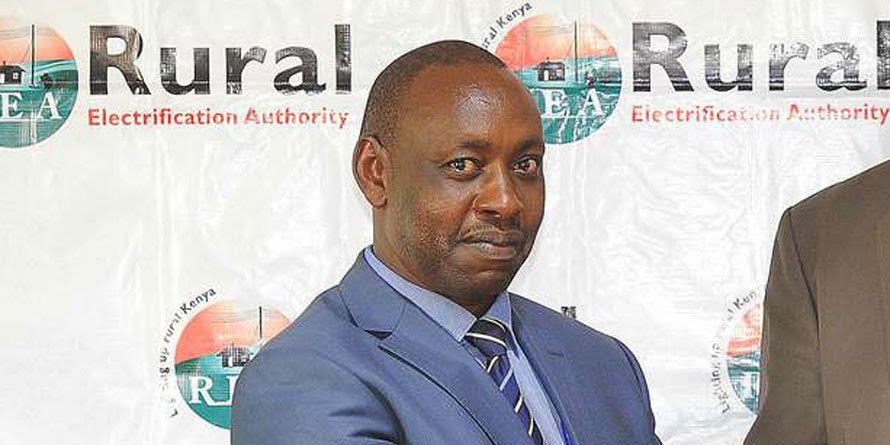 The Rural Electrification Authority, a parastatal established for purposes of accelerating the pace of rural electrification in the country is not new to fraud as recently EACC summoned its board members to shed light on a report they submitted to Energy Cabinet Secretary Charles Keter implicating some senior managers in corruption.

On the spot on corruption claims is the authority’s Managing Director Peter Mbugua who is believed to be driving the parastatal down the shameful, smelly path of fraud.

According to media reports, the man who was a long serving head of finance at the authority is linked to failure by the REA to connect schools, leading to spectacular failure of one of President Uhuru Kenyatta’s key flagship campaign pledge.

Other key persons reported to be leading from the front in matters corruption include the head of Finance Davis Cheruiyot and Human Resources boss Everlyn Koech.

MD Mbugua is reported to have sex exploits with Everlyn Koech, as a result, she is said to be the de facto MD at the helm of the authority.

Mbugua is said to be bragging of the sexual experience he often has with Koech.

According to local media reports, Mbugua once surprised a friend when he claimed Everlyn Koech who he refers as EK was ‘sweet, hot and her body shines in bed, no need for lights.’

To the man who doesn’t mind intercourse with his juniors, EK knows how to cuddle, nerves to play with when sharing ‘sweet’ moments.

Despite bragging how he enjoys sexual escapades with madam HR, the MD has little to show when it comes to competency in profession related matters. As it’s during his tenure at the finance docket that the authority saw many scandals brought to light. Notably, the multibillion “Electricity for schools” and procurement of faulty transformers and cables.

Related Content:  Businessman Who Raped And Robbed Lady In Garissa On The Run

On the Electrification for School’s program, REA is quoted saying a total of 32,952 public primary schools were connected to power as of December 2018. However, the figure contradicts the data presented to the ministry of Education by the management which showed the figures stood at 27,544 leading to many questioning about 5,408 imaginary schools.

The figure behind the so called “imaginary schools” is said to be a staggering Sh5.4 billion – said to have been lost to fraud.

A section of media reported that the Sh5.4 billion payments were authorized and paid during the period Mbugua served as head of finance or MD.

Mbugua was also on the spot when the Auditor-General questioned other contracts related to inflated numbers.

One key question many ask to date is how he survived the shakeup at the authority which saw then MD, Ng’ang’a Munyu being sacked.

However, it’s reported that Mbugua was used to fix Munyu to land the top job.

He is said to have used his close ties with a powerful Jubilee politician to shield himself from attacks related to graft.

However, recently, Mbugua is said to have turned his back against the politician after realizing the his influence was going down.

He is now said to be among the Mount Kenya Mafia members keen to block the politician’s 2022 Presidential ambitions.

The MD who is a former senior manager at Unga Group, is said to owning a chain of high-end apartments around the country from the massive wealth he has amassed.

He is also linked to a 2017 fraud that saw a court ruling award three contractors Sh139.8 million as compensation and damages, which apparently belonged to one individual.

Following the ruling, a local media has established that most of the companies and contractors are either personal friends of the MD or his relatives.

To protect himself from public ridicule on corruption and audit, he is said to have registered his wealth under the names of his wife and children.

Sources have also intimated to a local media outlet that the man who has branded himself ‘’mweupe kama pamba (as white as wool)” has silently harboured political ambitions. He is also said to be the subject of discussion by the top leadership of various government bodies tasked to end corruption in the country – NIS, DPP, DCI and EACC.

The no nonsense powerful minster, Dr Fred Matiang’i is said to have been enraged by the rot at the authority led by Mbugua and has since ordered a thorough audit report of all contracts from 2014 – when Jubilee government took over the government.

The report will then be tabled before the CS during the next national development implementation and communication cabinet committee meeting to be held at his [Matiang’i] Harambee House after which the office of the DPP and DCI will be authorized to go after Mbugua and several serving and former managers.