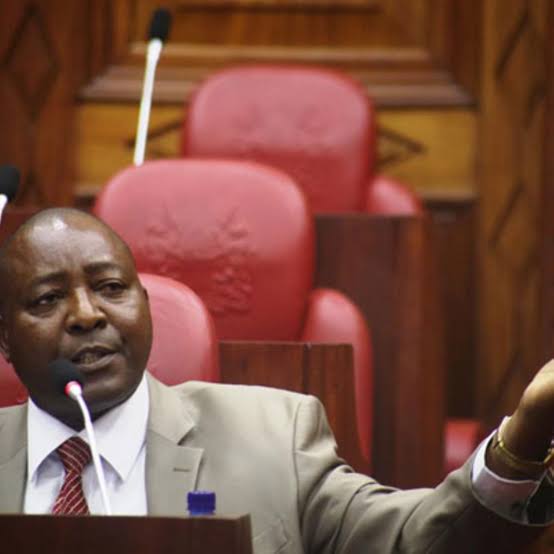 In October 1998, the Daily Nation carried a story of a man who had milked an elephant and lived to tell the story. The man sued the paper for defamation and was awarded Sh2 million by the court. It is this macabre story that catapulted Mugo Njeru to notoriety. Njeru was then a reporter with the Nation, where he would rise to bureau chief at the turn of the century before quitting for business.

Shortly after leaving the Nation, Njeru opened an office in town to manage his Embakasi rental apartments and foodstuff supply business to restaurants in the city. His troubles with the NLC began after the commission ruled he had forged a title of a prime property in Mombasa belonging to Hezron Ndanyi Lidede. The family said they were allocated the land in 1990.

Currently,
Renowned serial fraudster John Mugo Njeru and Peter Masha Kalama using a forged deed plan No. 750265 amongst a suite of other fraudulent records, worked in cahoots with corrupt lands officials to produce an irregular parallel title to the same piece of land Plot L.R. No. MN/I/6552 which is owned by the Late Hezron Ndanyi Lidede who acquired it in 1990, the Ndanyi family speaking to Kenya insights affirms that they never relinquished claim sold and/or transferred the said property to another person.

The authority to create Mugo’s fraudulent title is alleged to have originated from the office of Commissioner of Lands vide letter of 4th April 2011, a whole two decades from when the deed plan was created.

Before he became the IEBC Chairman Mr. Wafula Chebukati, then Managing Partner at COOTOW & ASSOCIATES ADVOCATES represented Edwin Amulele Ndanyi the son of the Late Hezron Ndanyi Lidede in petitioning the Municipal Council of Mombasa and the Registrar of Titles Department of Lands Mombasa to provide records for the property.

On 27th July, 2012 Edwin Ndanyi reported the fraud to the CID which thereafter launched an investigation and the then CID Serious Crimes unit detective Mark Ndiema unearthed that there were no records for the deed plan No.750265 at the Survey of Kenya and that the deed plan No 150265 existed.

John Mugo Njeru has since surrendered his irregularly acquired title to the Lands Office Mombasa. Ndanyis family’s efforts to get the records at Lands rectified are facing headwinds as some of the officials involved in the initial corrupt scheme are still in office.

Through a letter dated 31st May, 2022 the County Government of Mombasa confirmed that the rateable property owner as on 30th June, 2009 was Hezron Ndanyi Lidede, throughout the years prior to the fraudsters interference the Ndanyis had been a dutiful and up-to-date rates payer at the Municipal Council of Mombasa, they have severally pleaded with the County of Mombasa to rectify their records to enable them to continue paying rates up-to-date as they used to, but no response touching on this issue has been received from the Mombasa County Government.

The County Governments continue to lose billions of Kenya Shillings annually in uncollected revenue due to this type of Land fraud Menace.

Recent Information coming to the Ndanyi family is that John Mugo Njeru is attempting to make a comeback and forcefully invade the property to gain possession and sell to an unsuspecting buyer so as to finance his many land fraud cases in the courts. 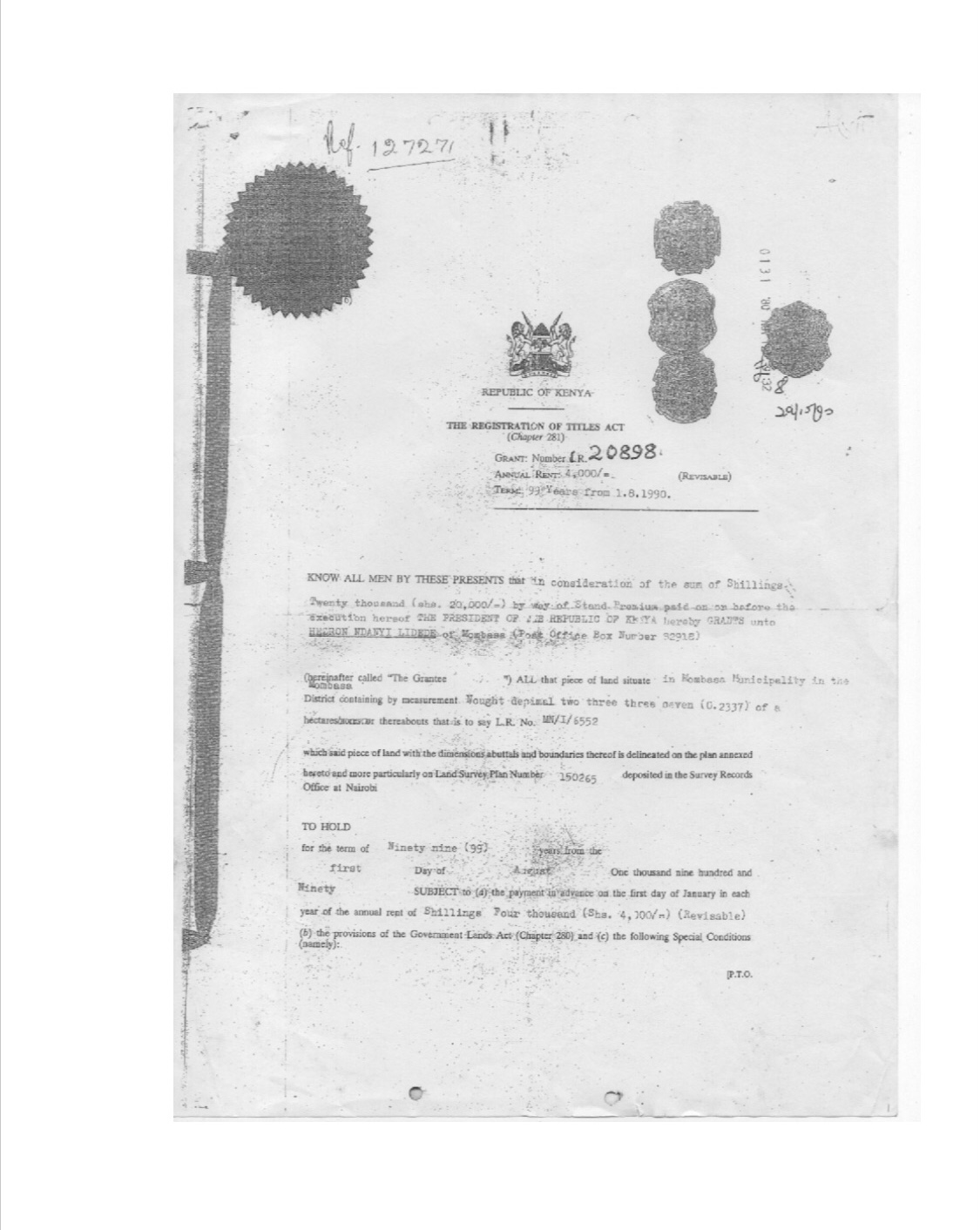 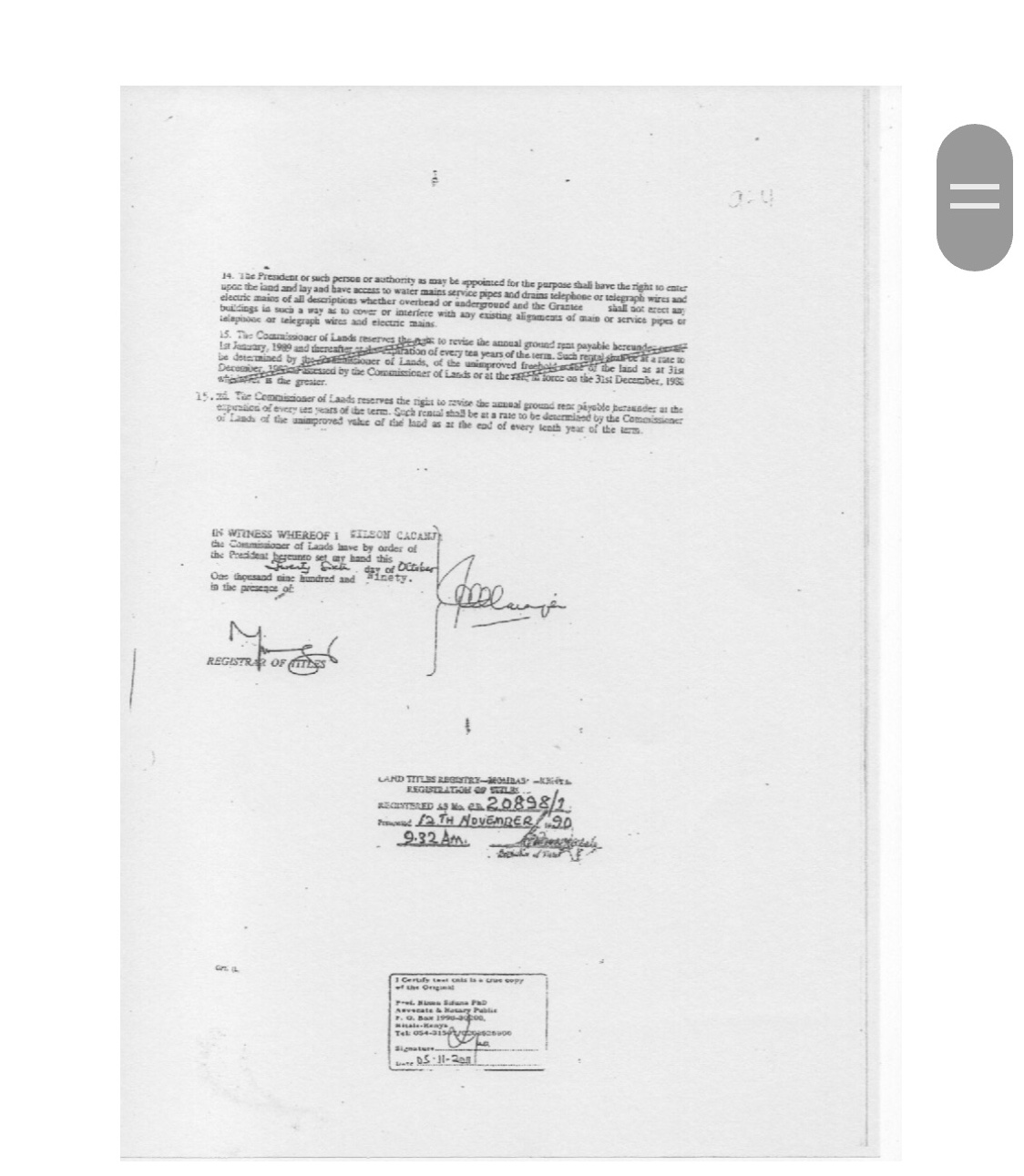 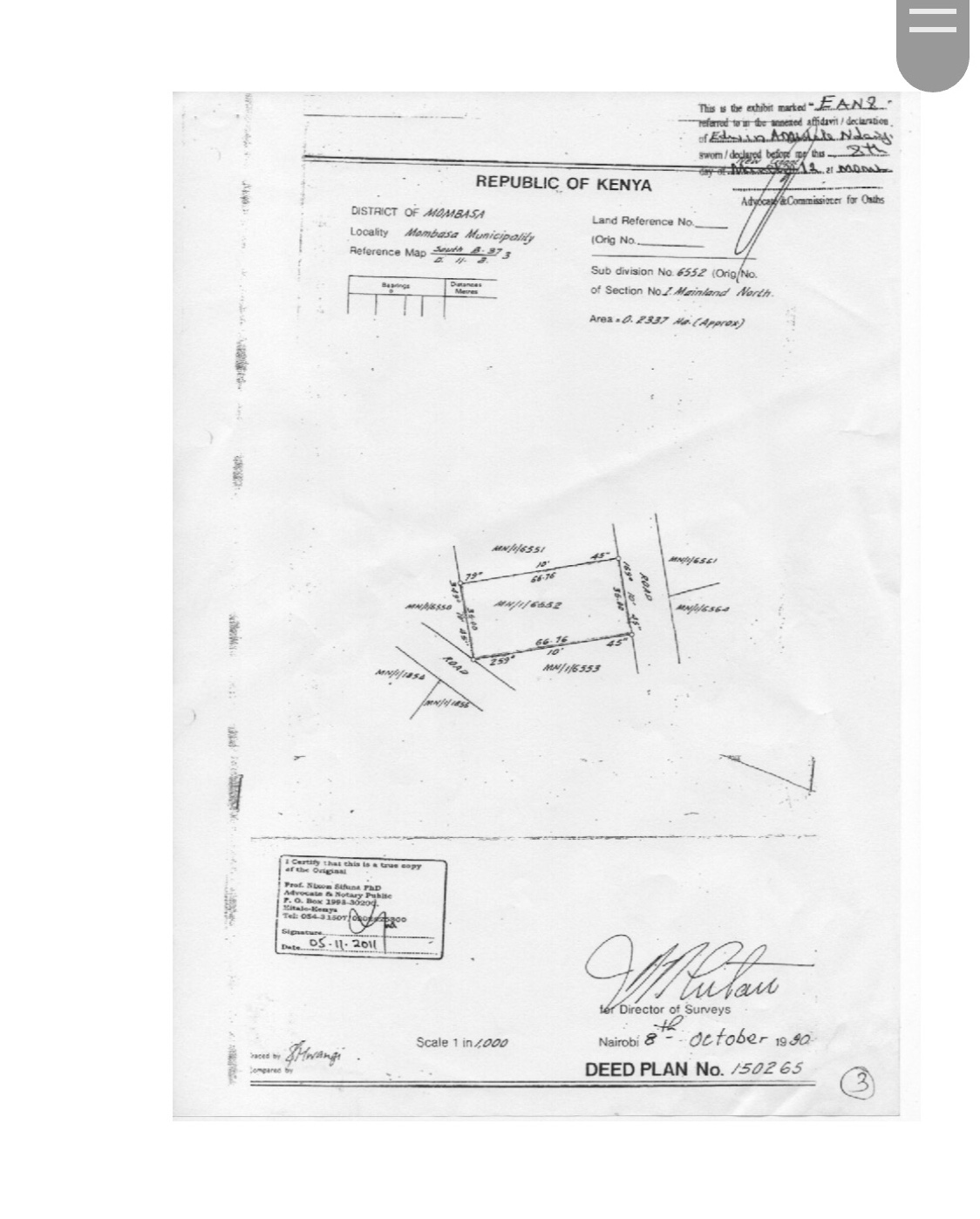 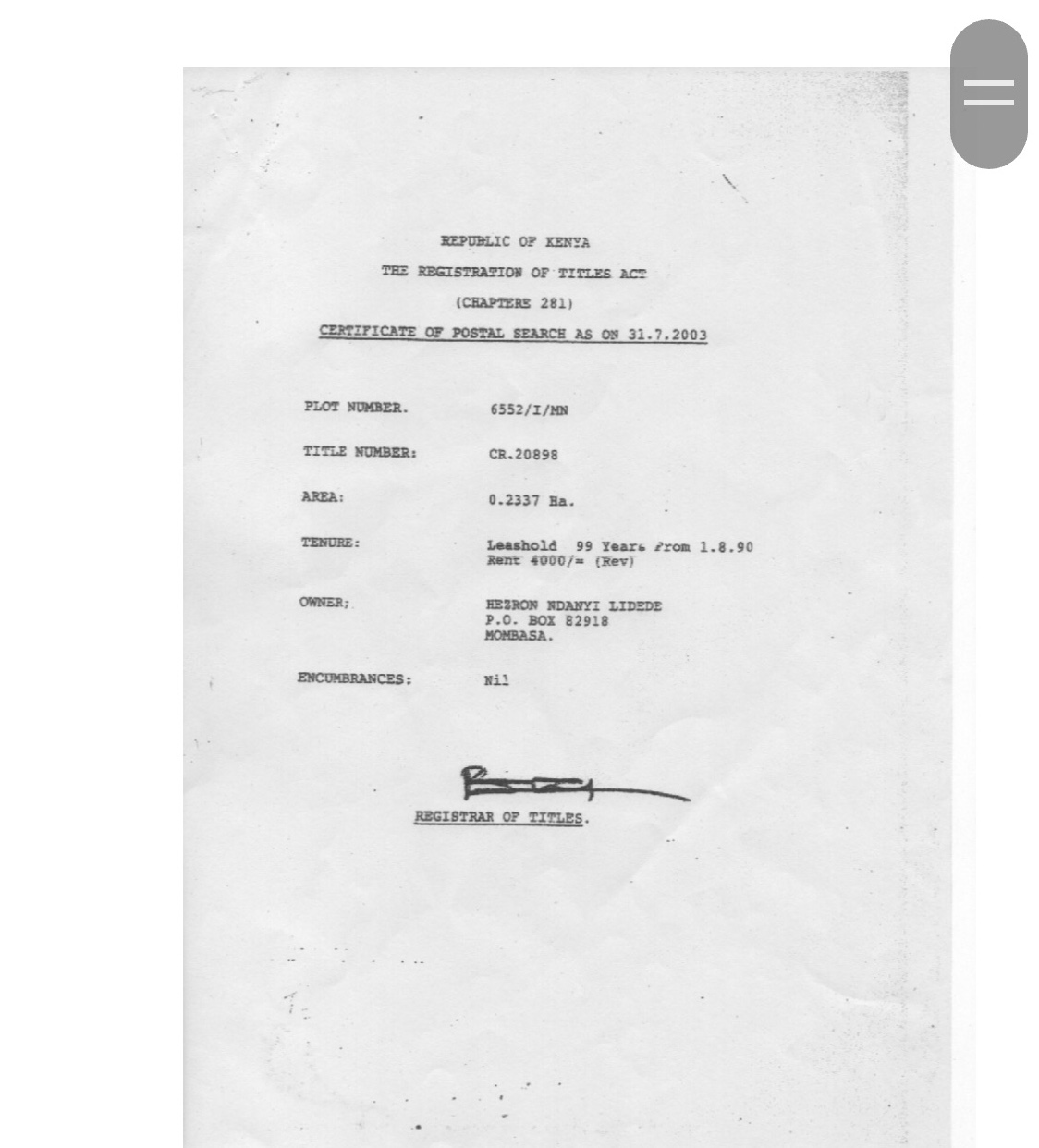 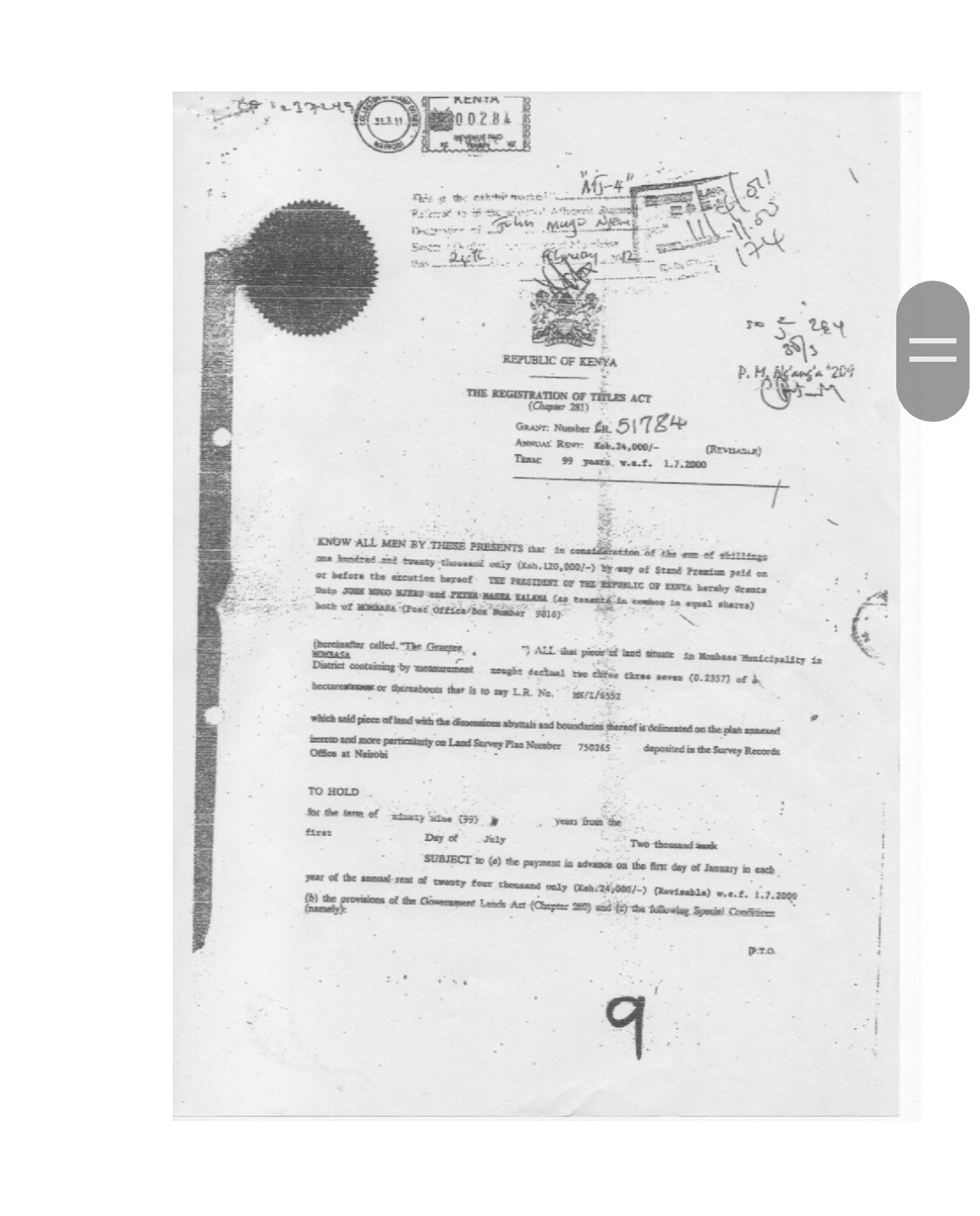 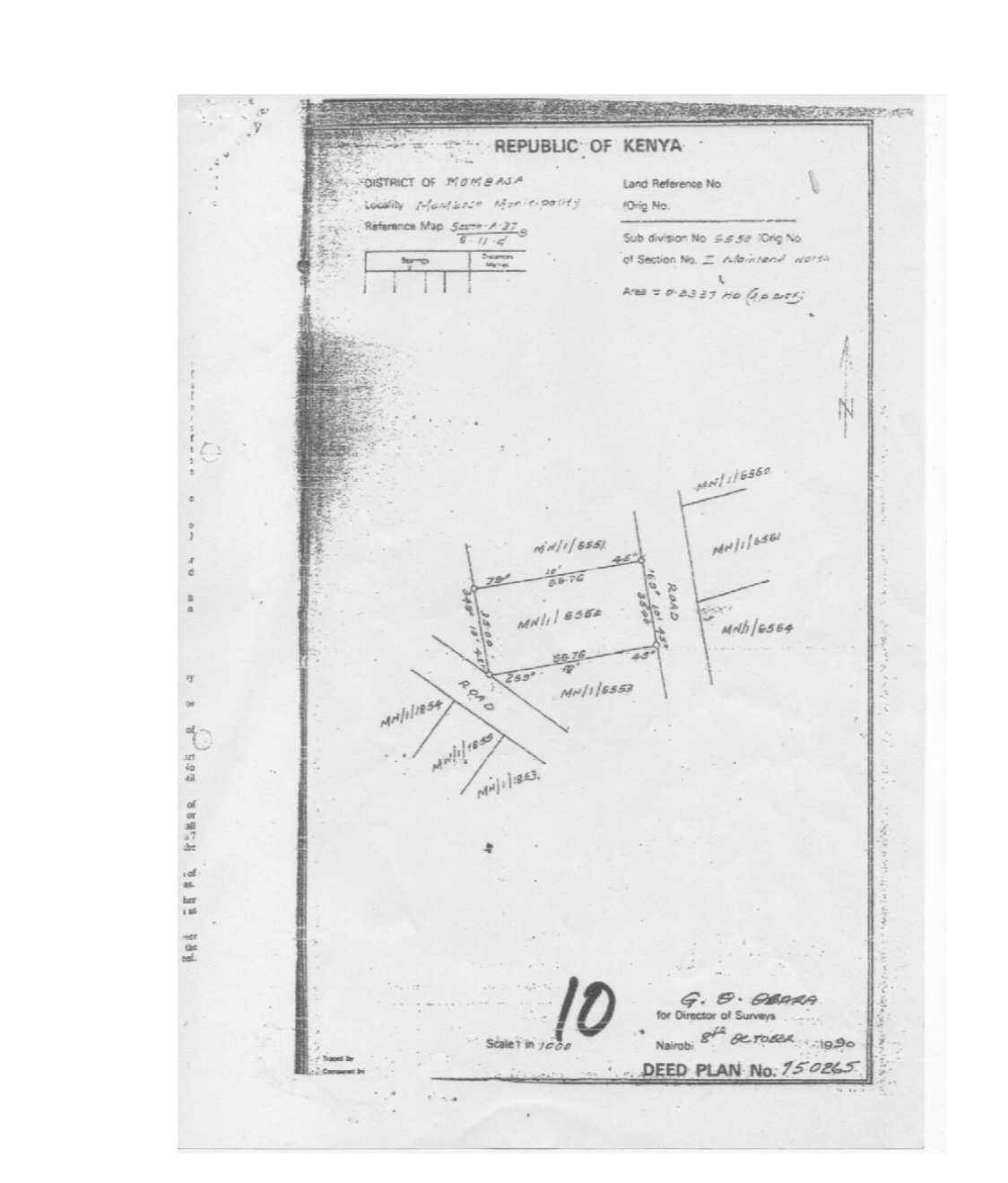 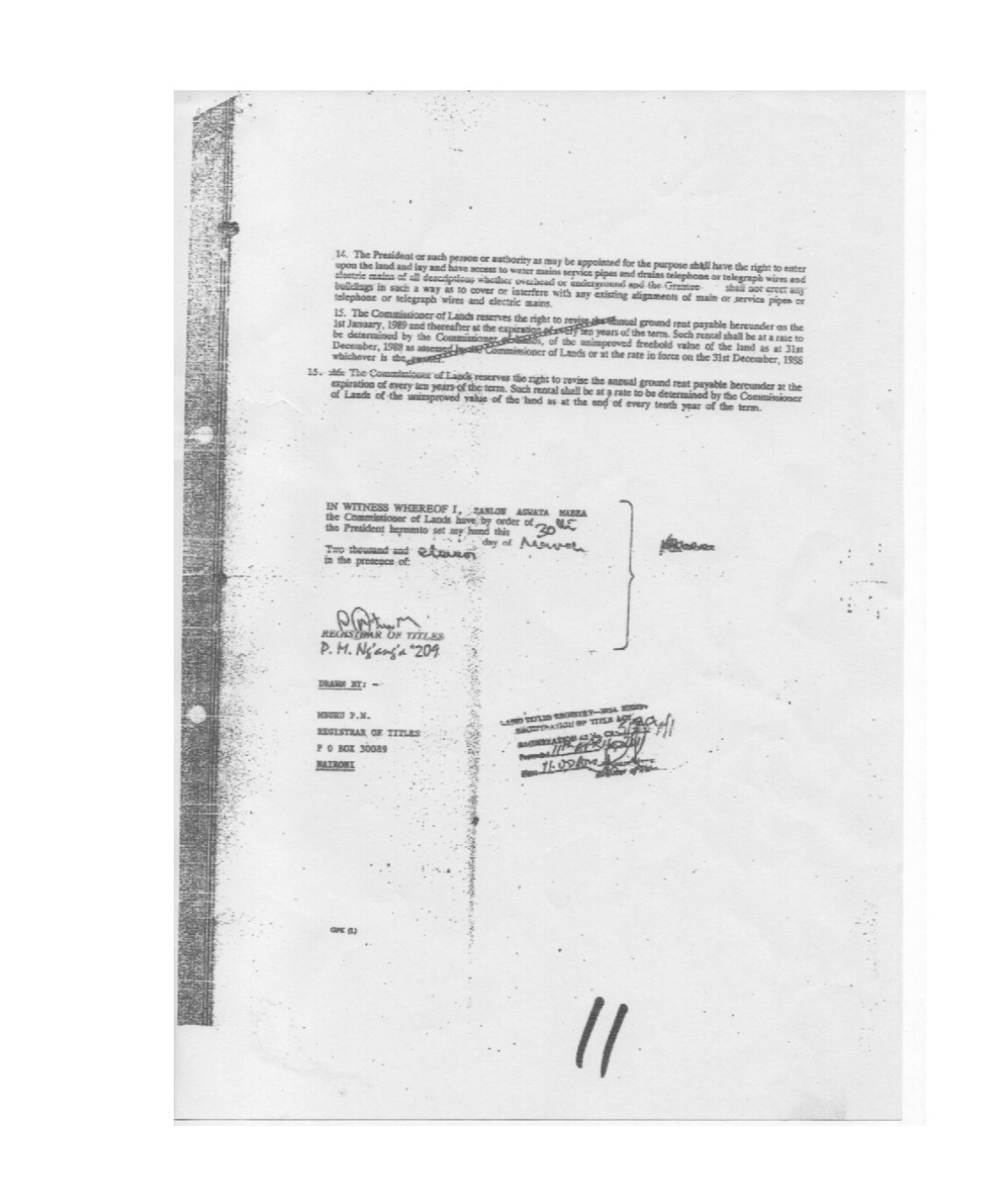 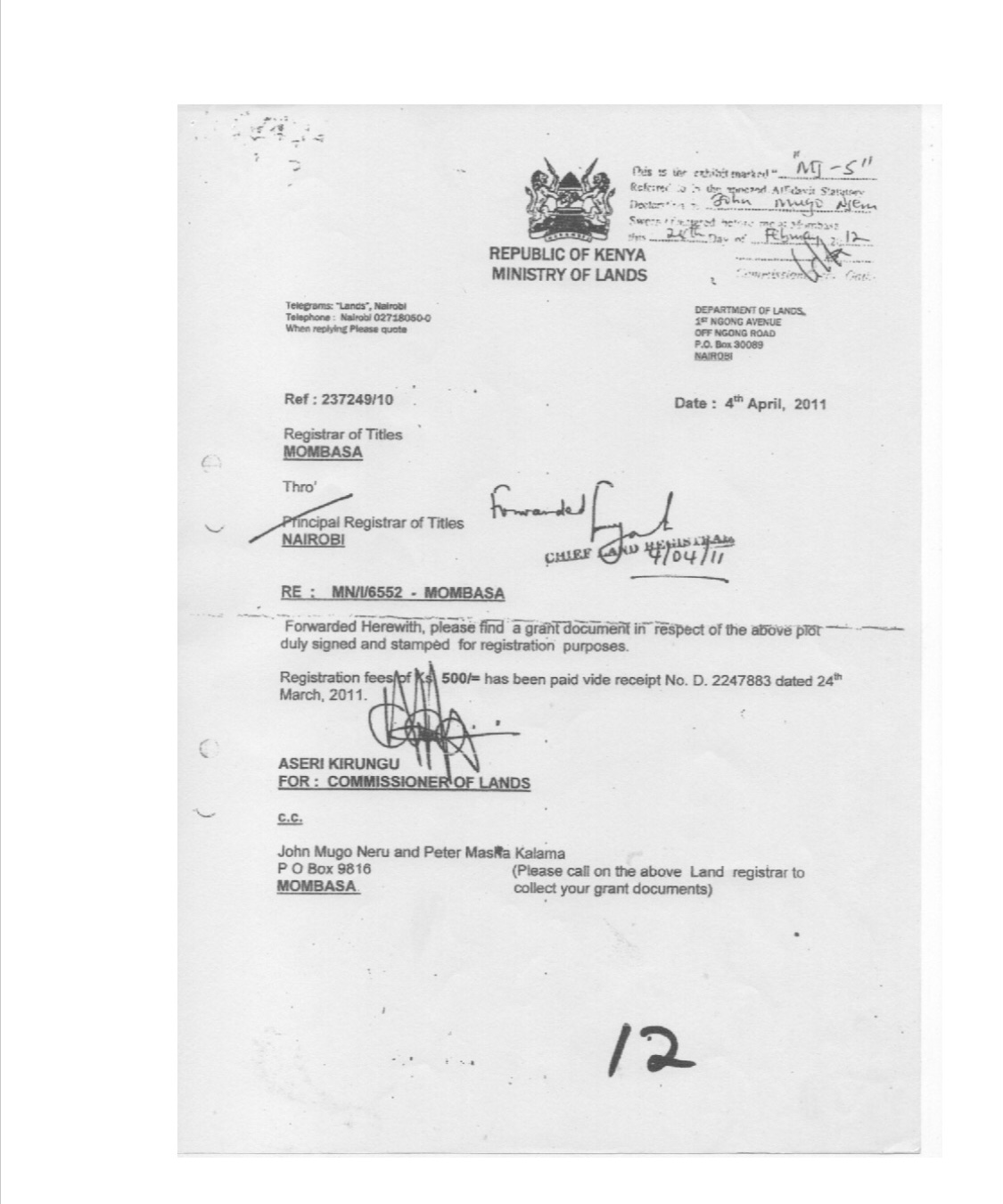 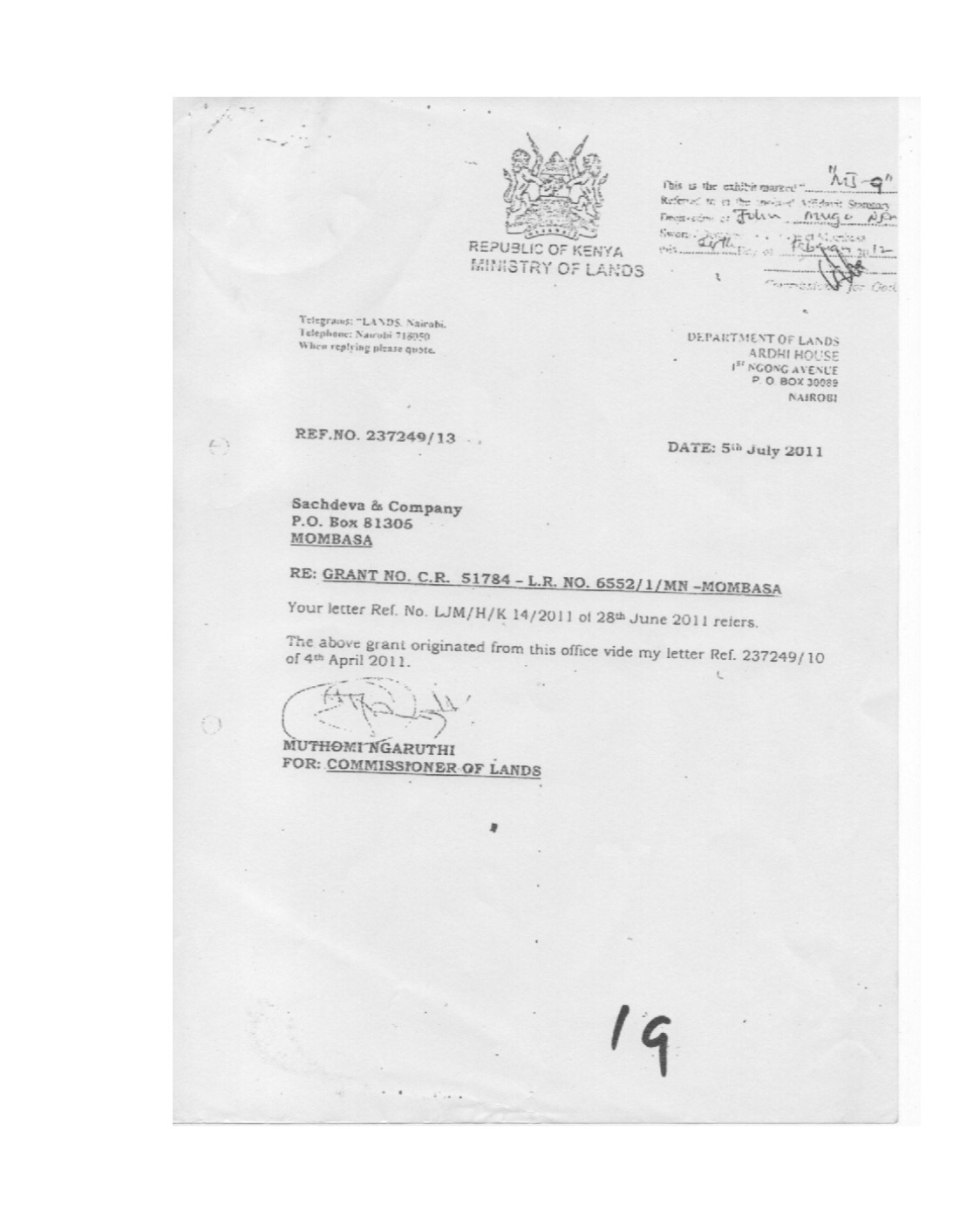 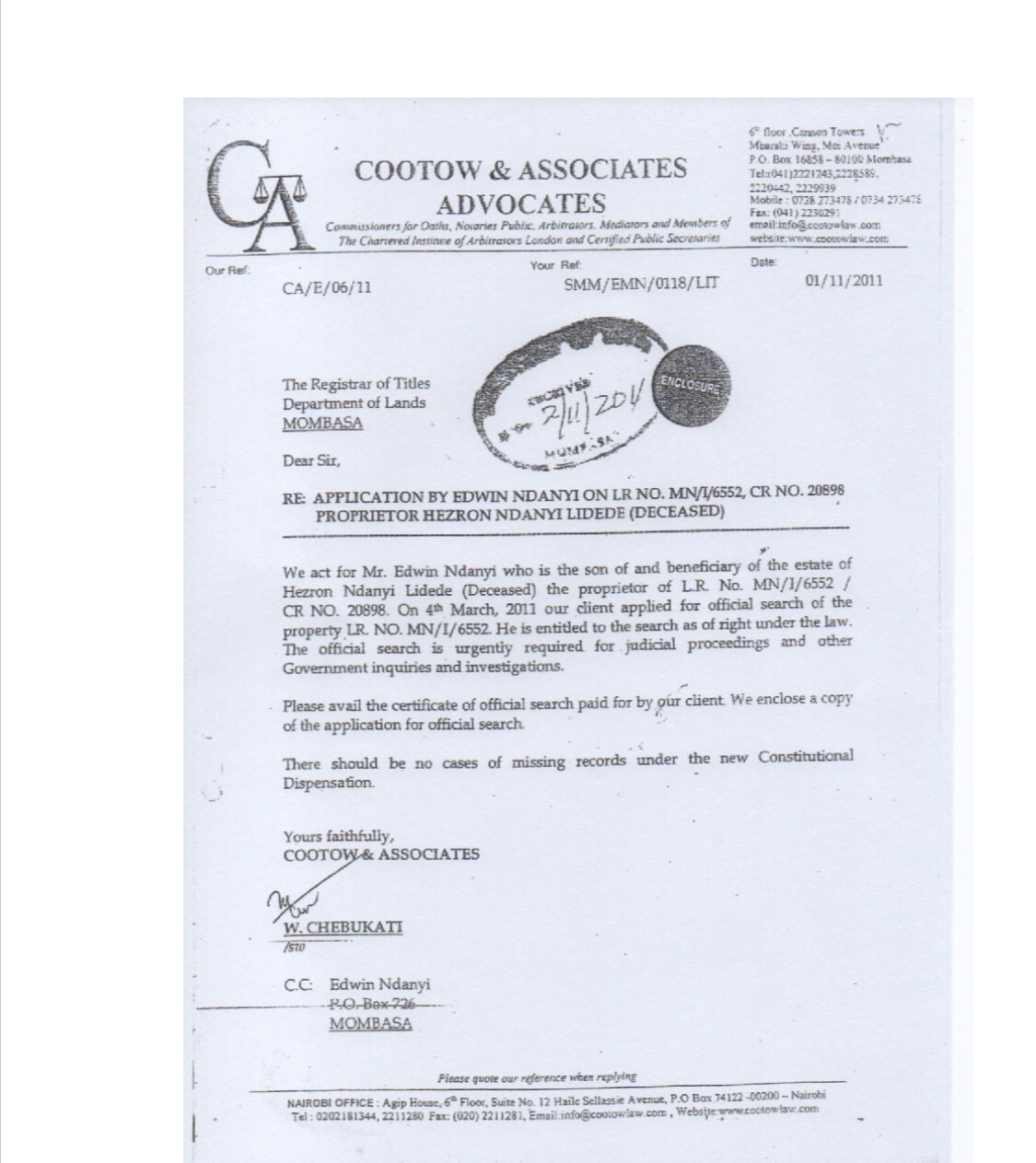 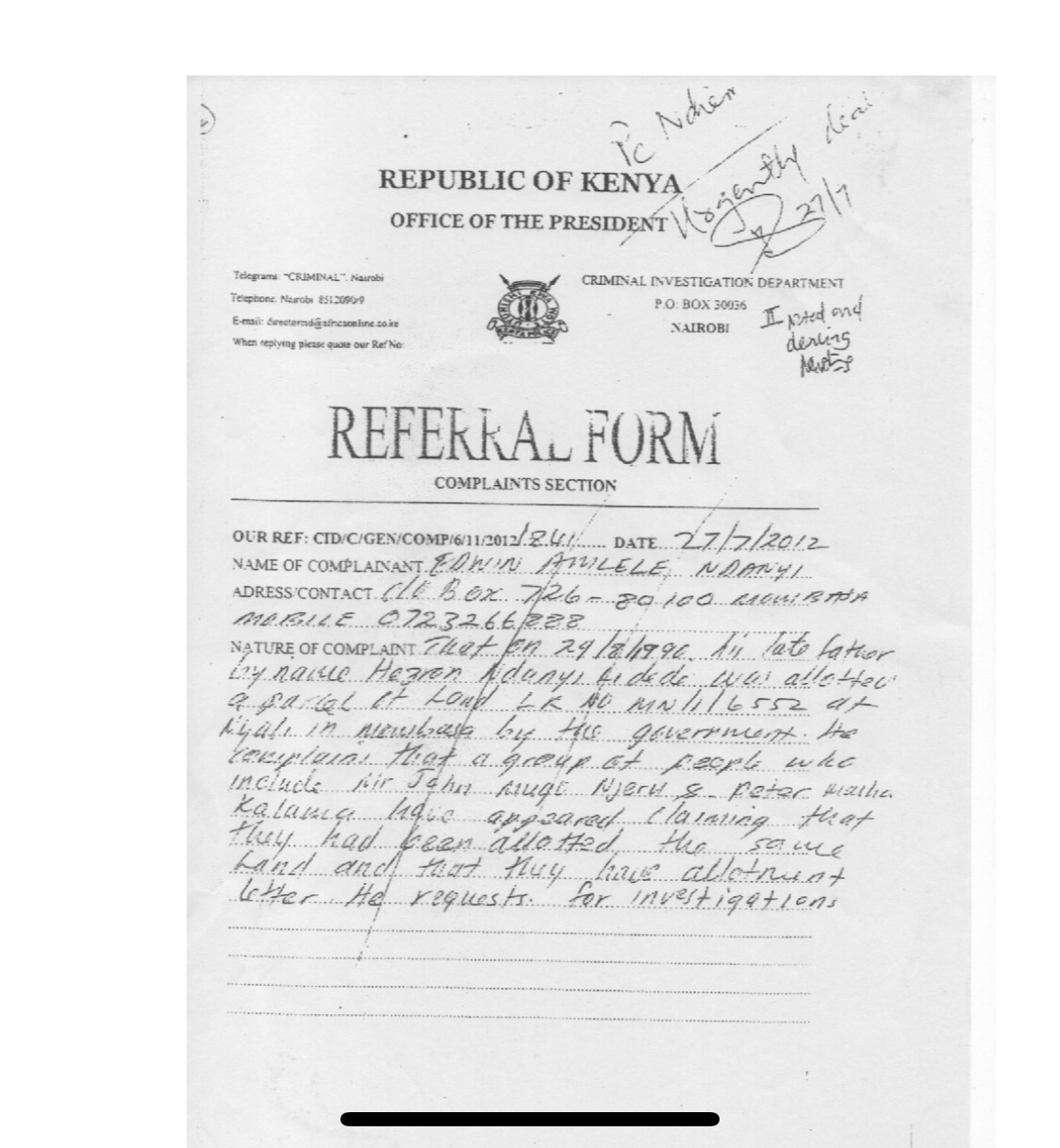 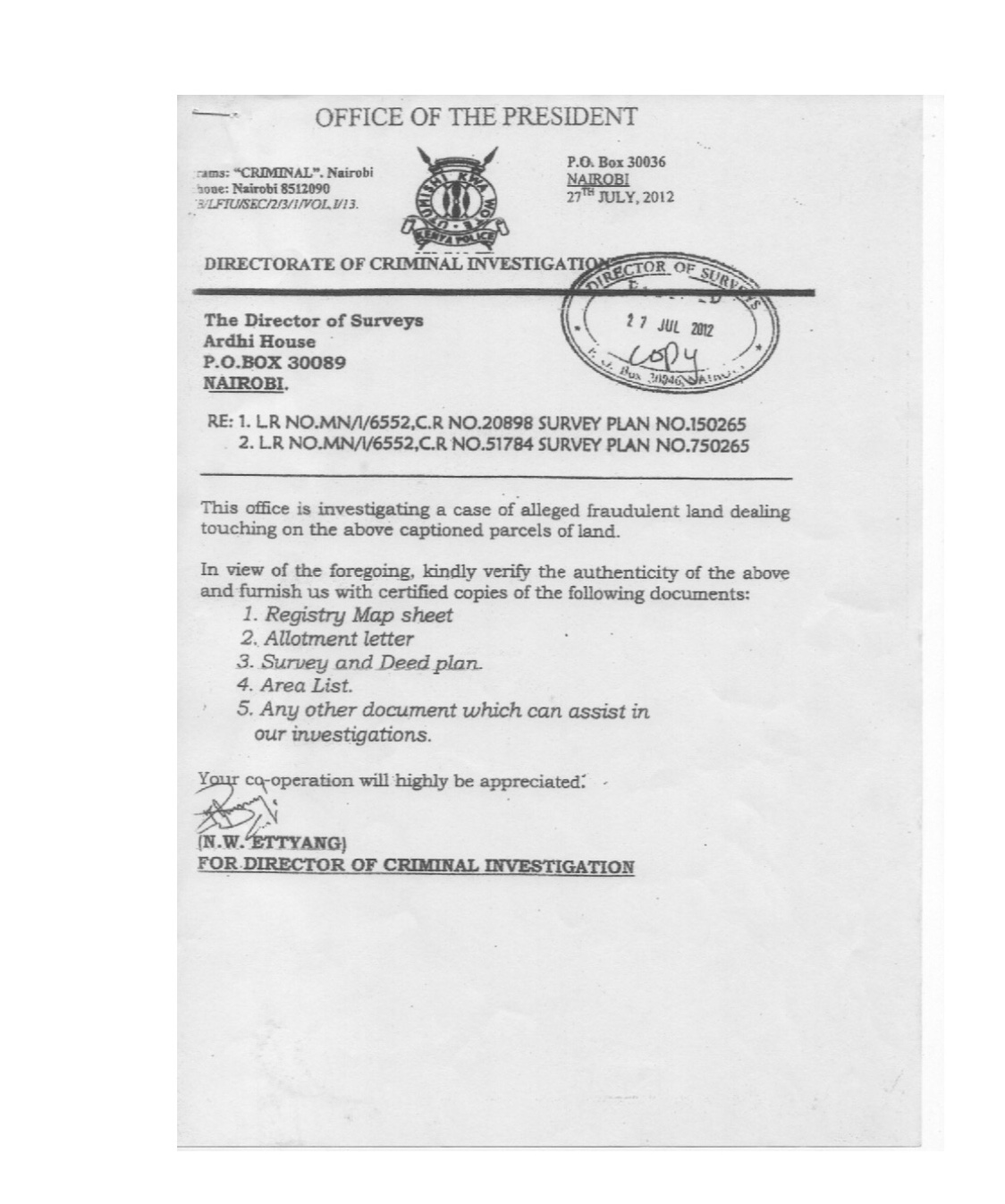 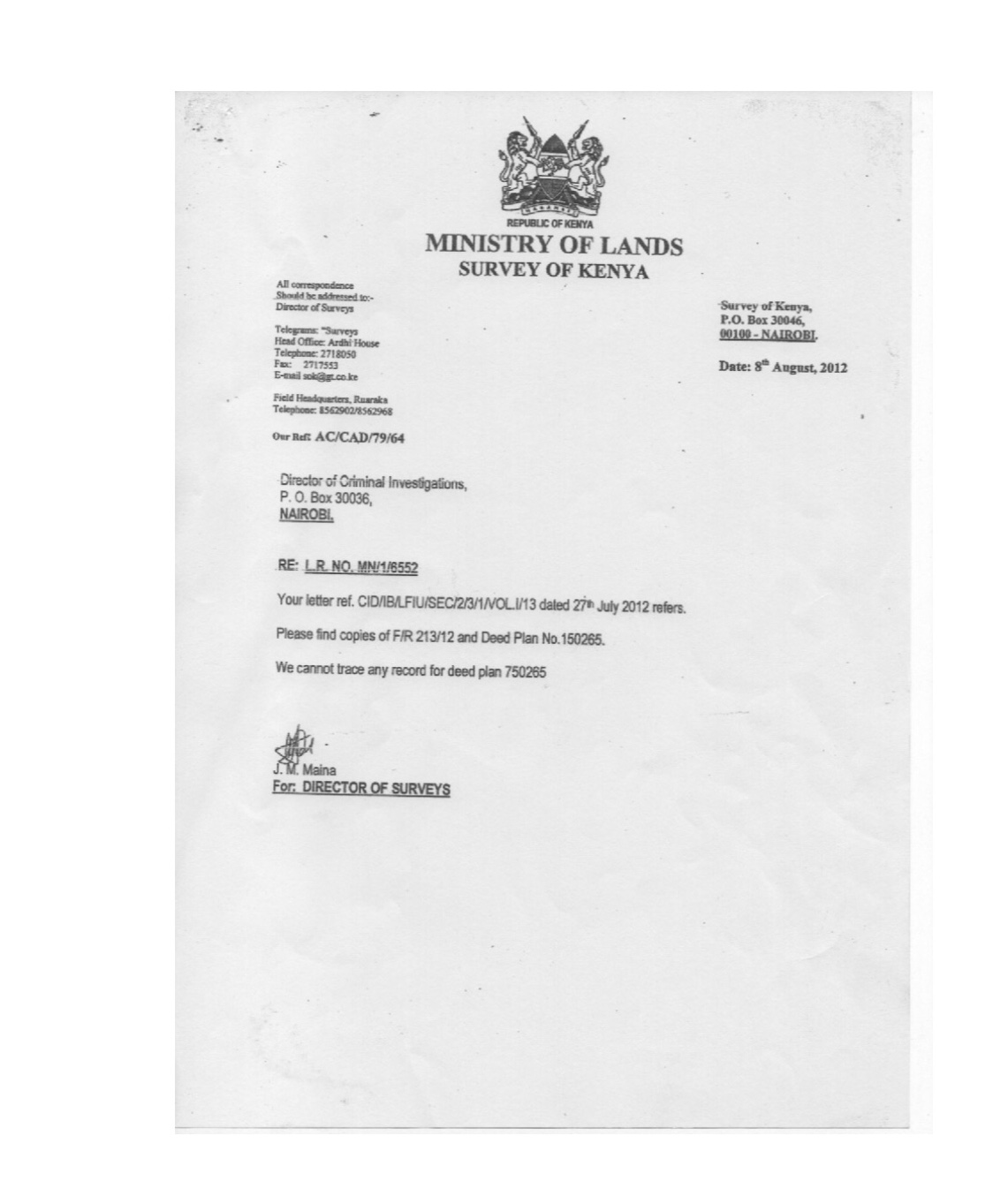 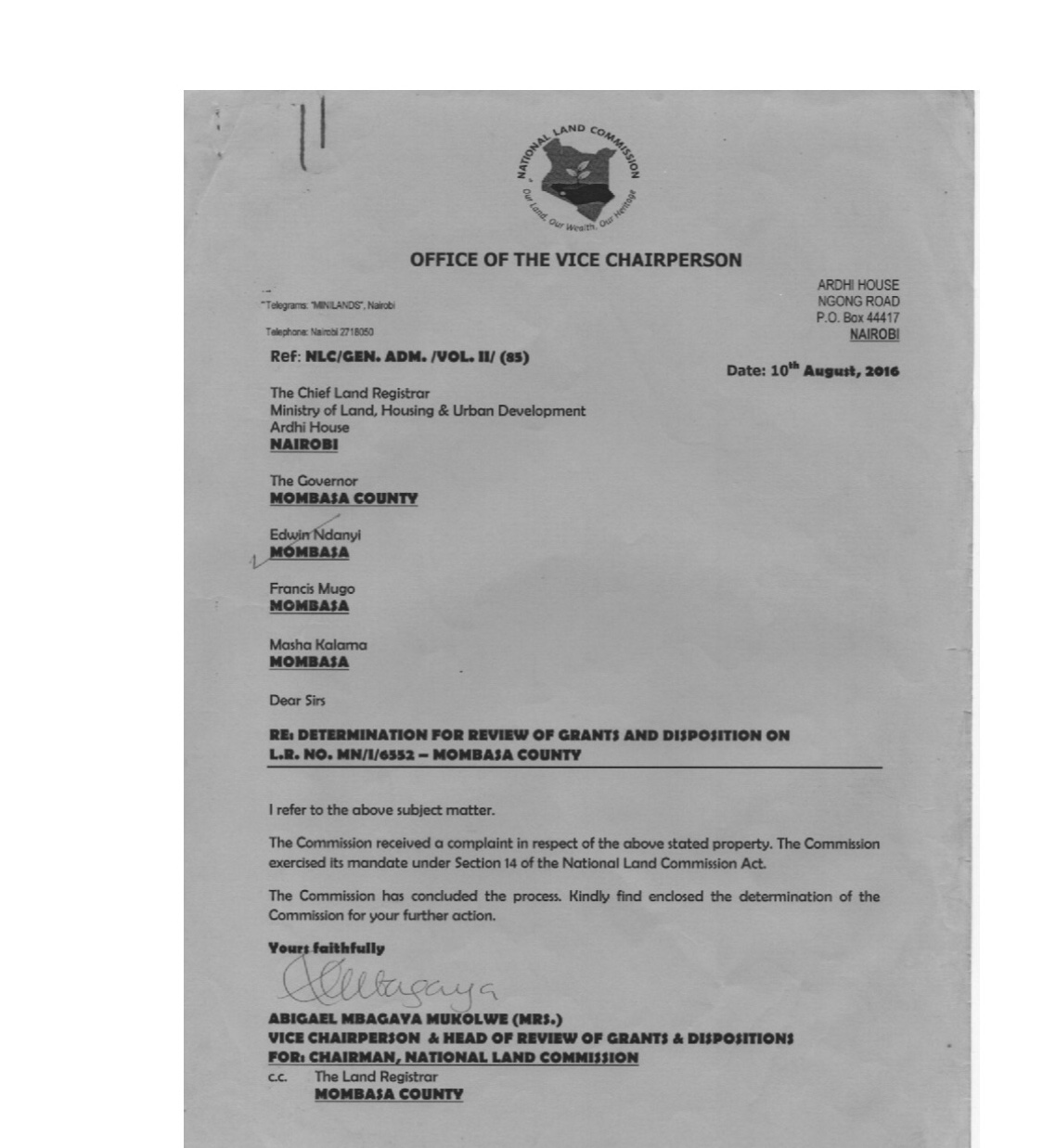 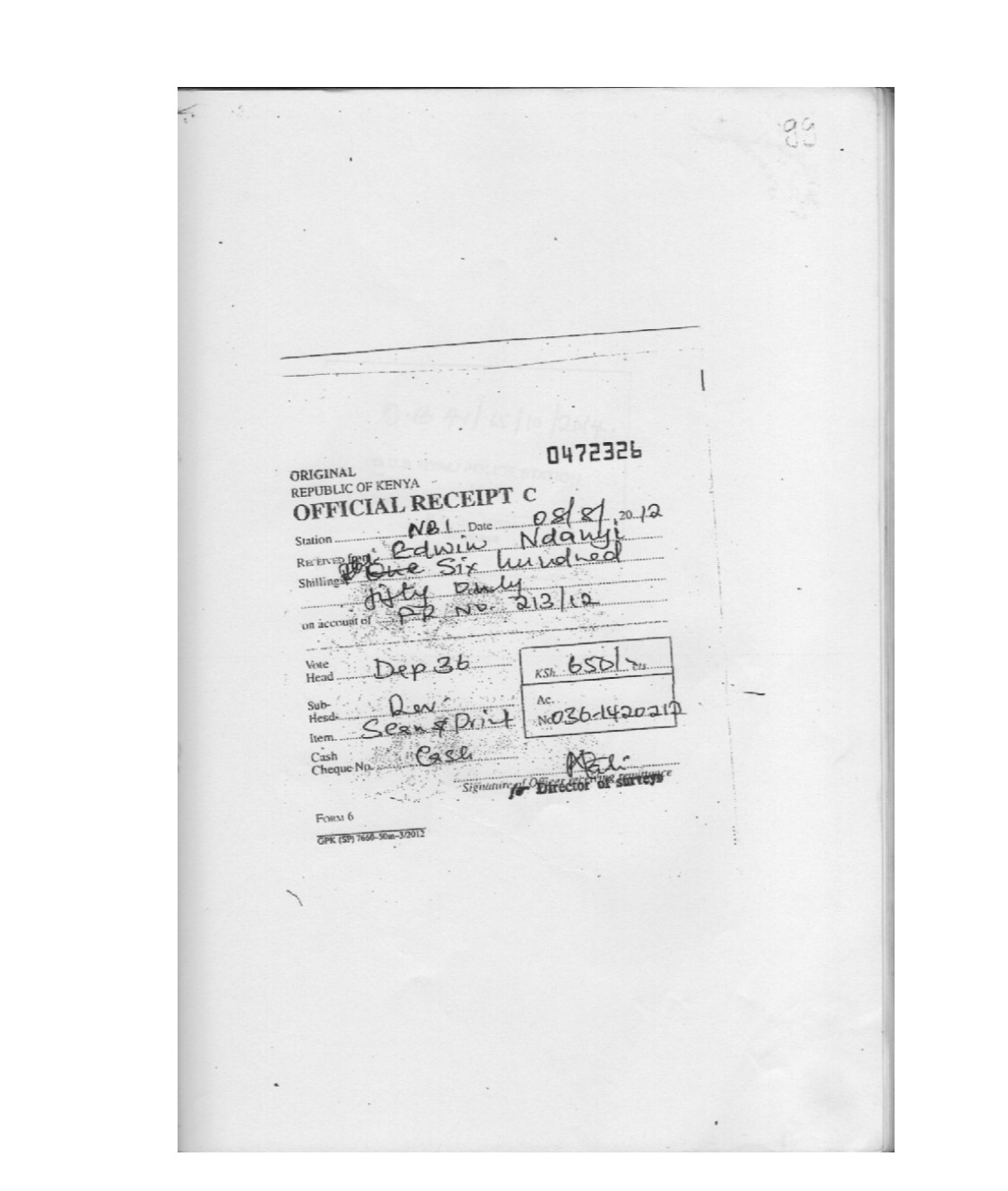 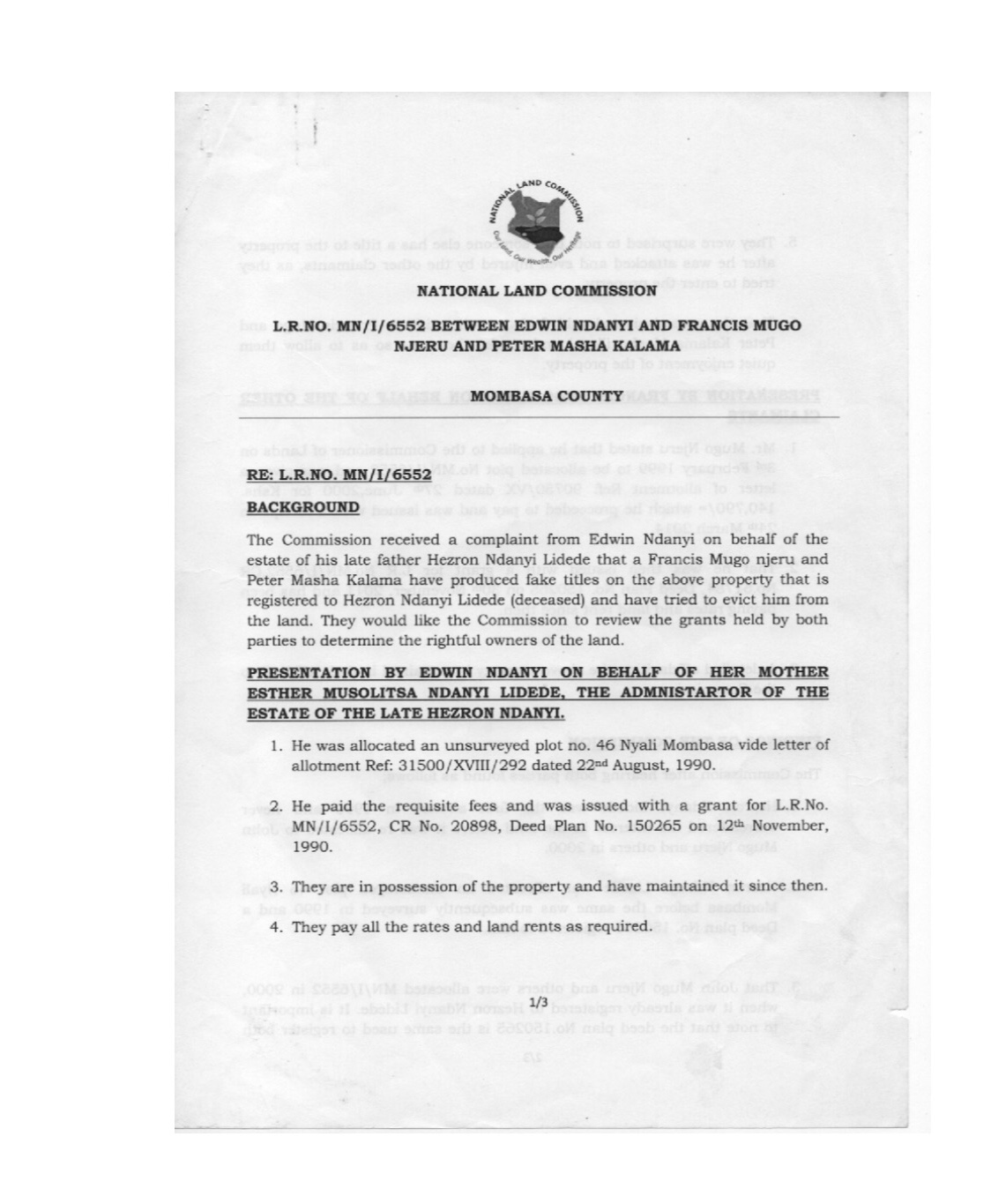 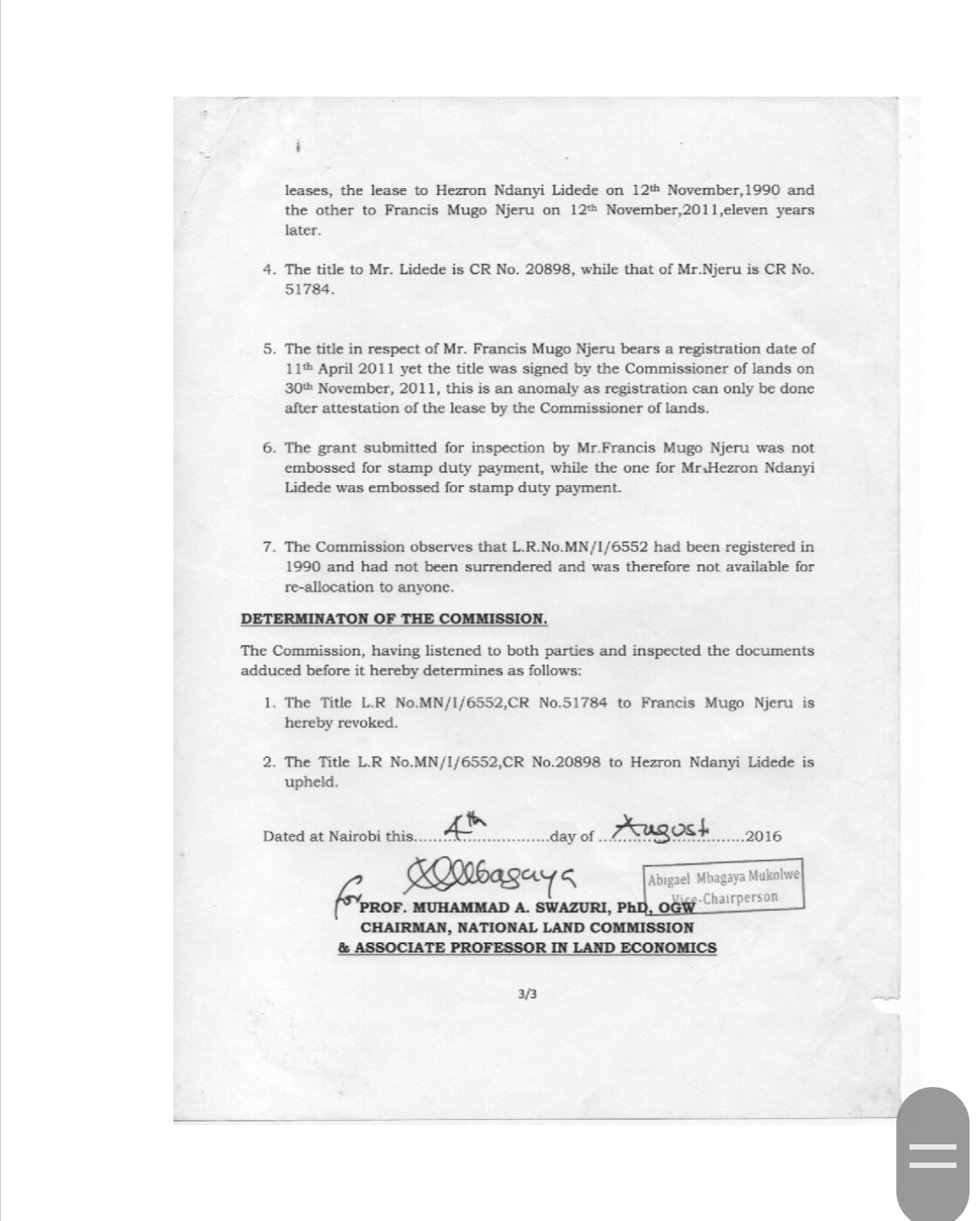 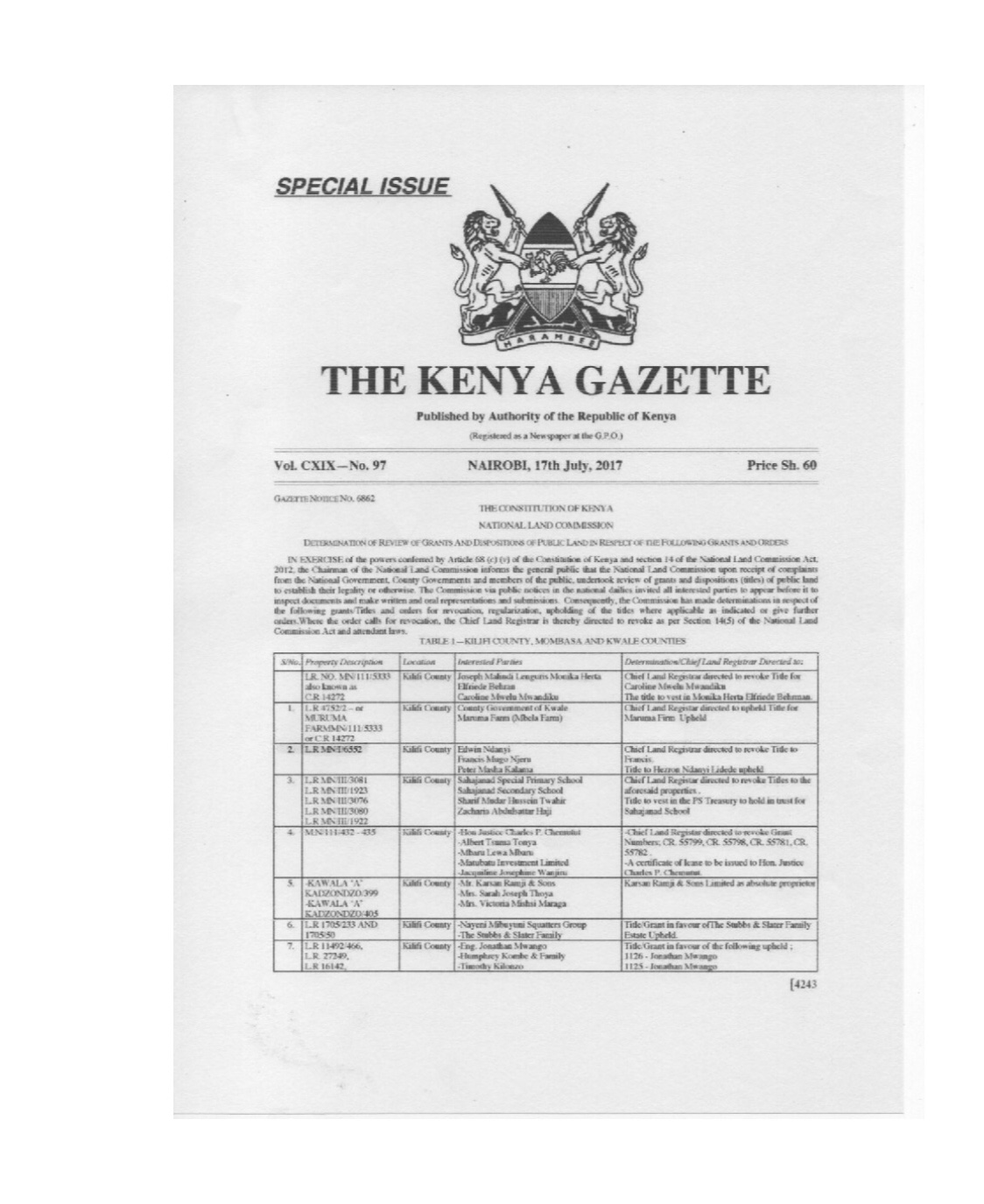 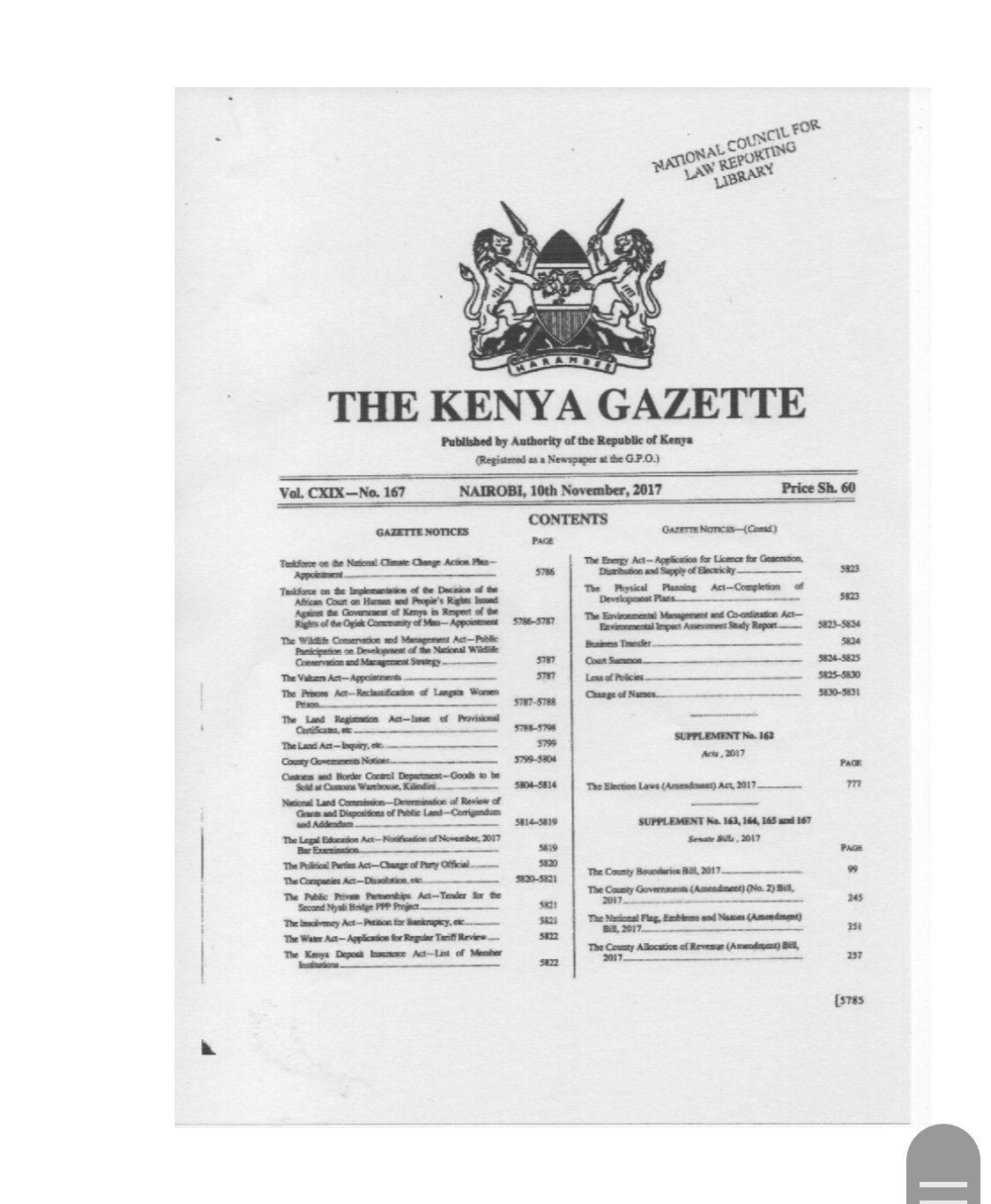 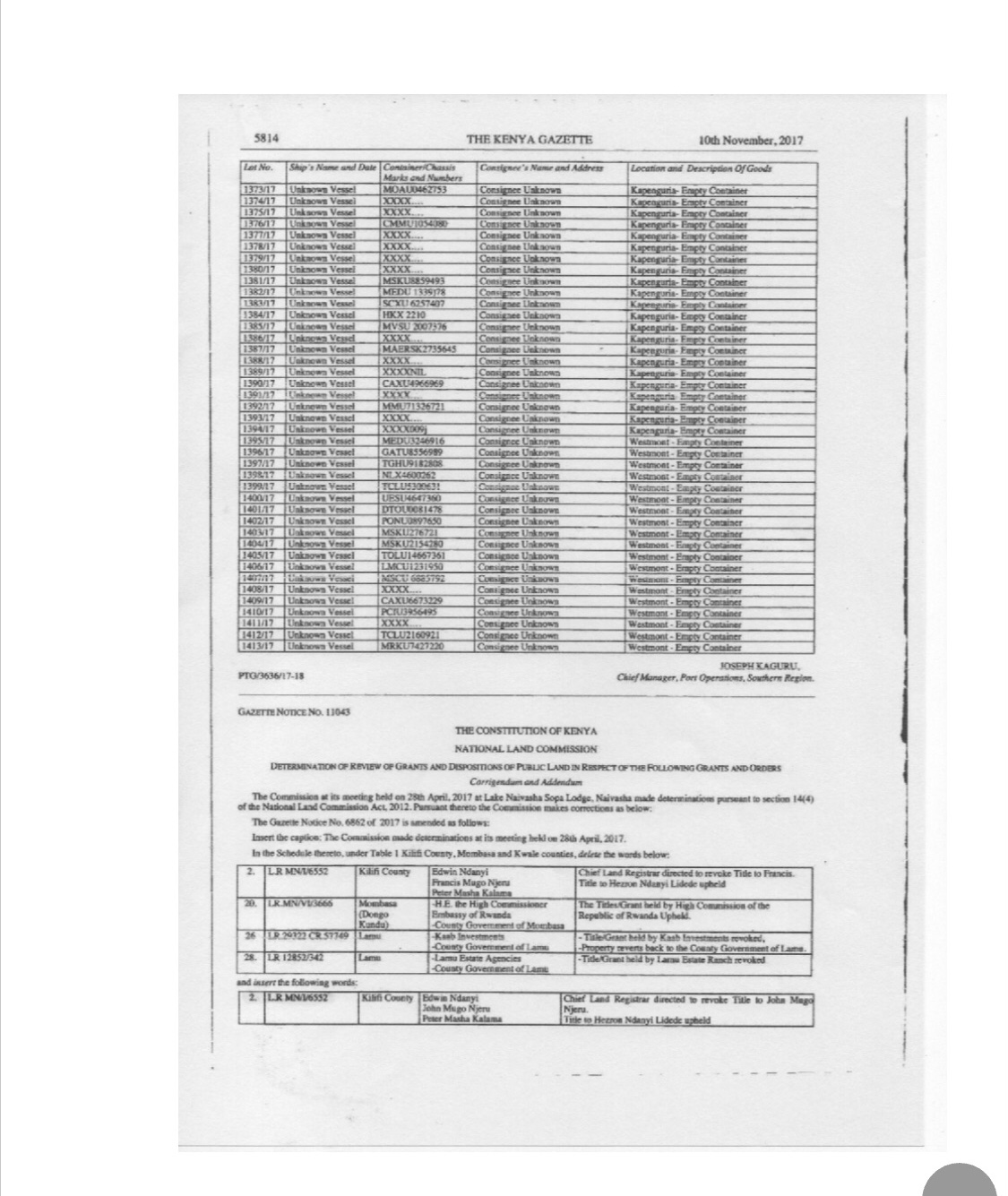 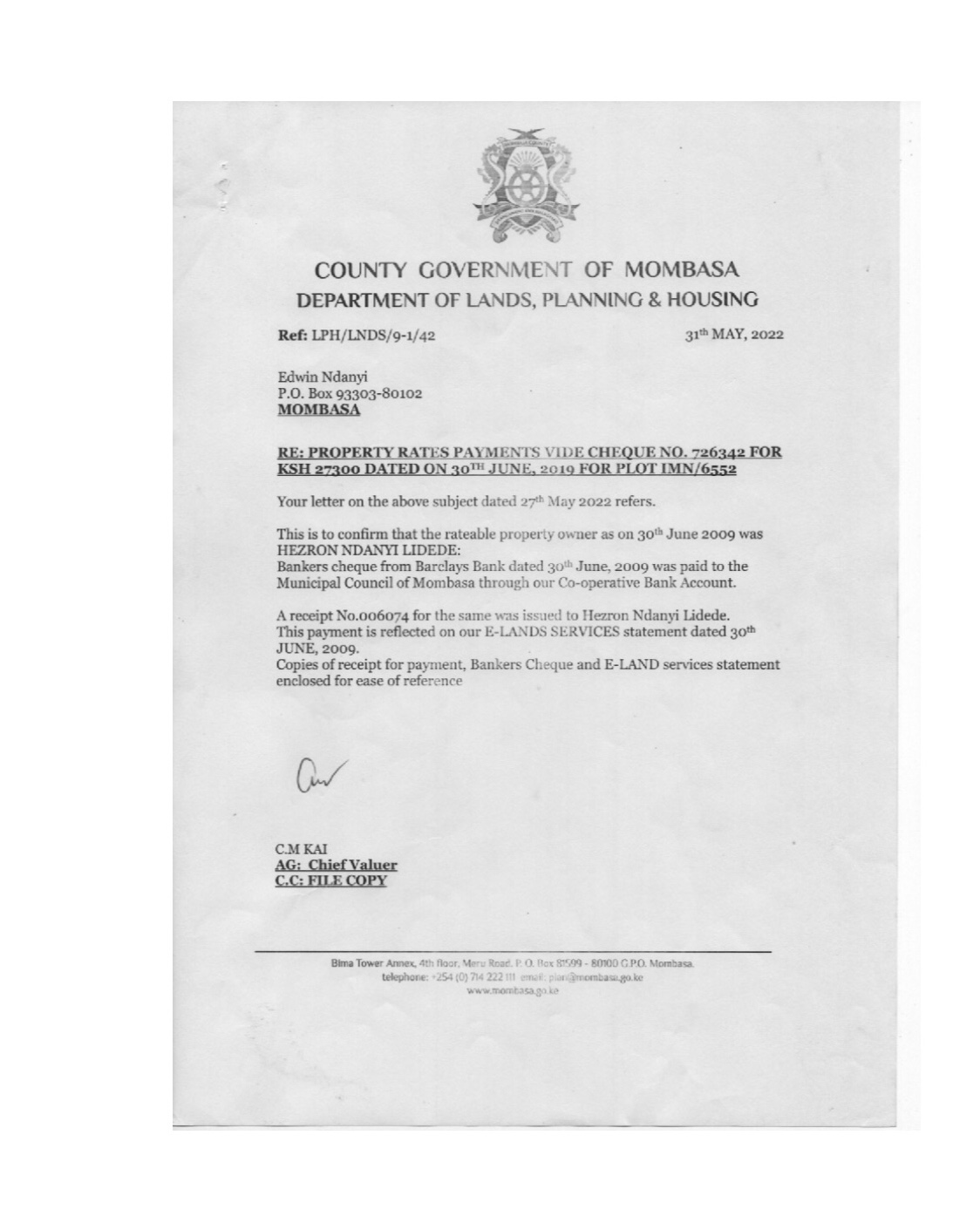 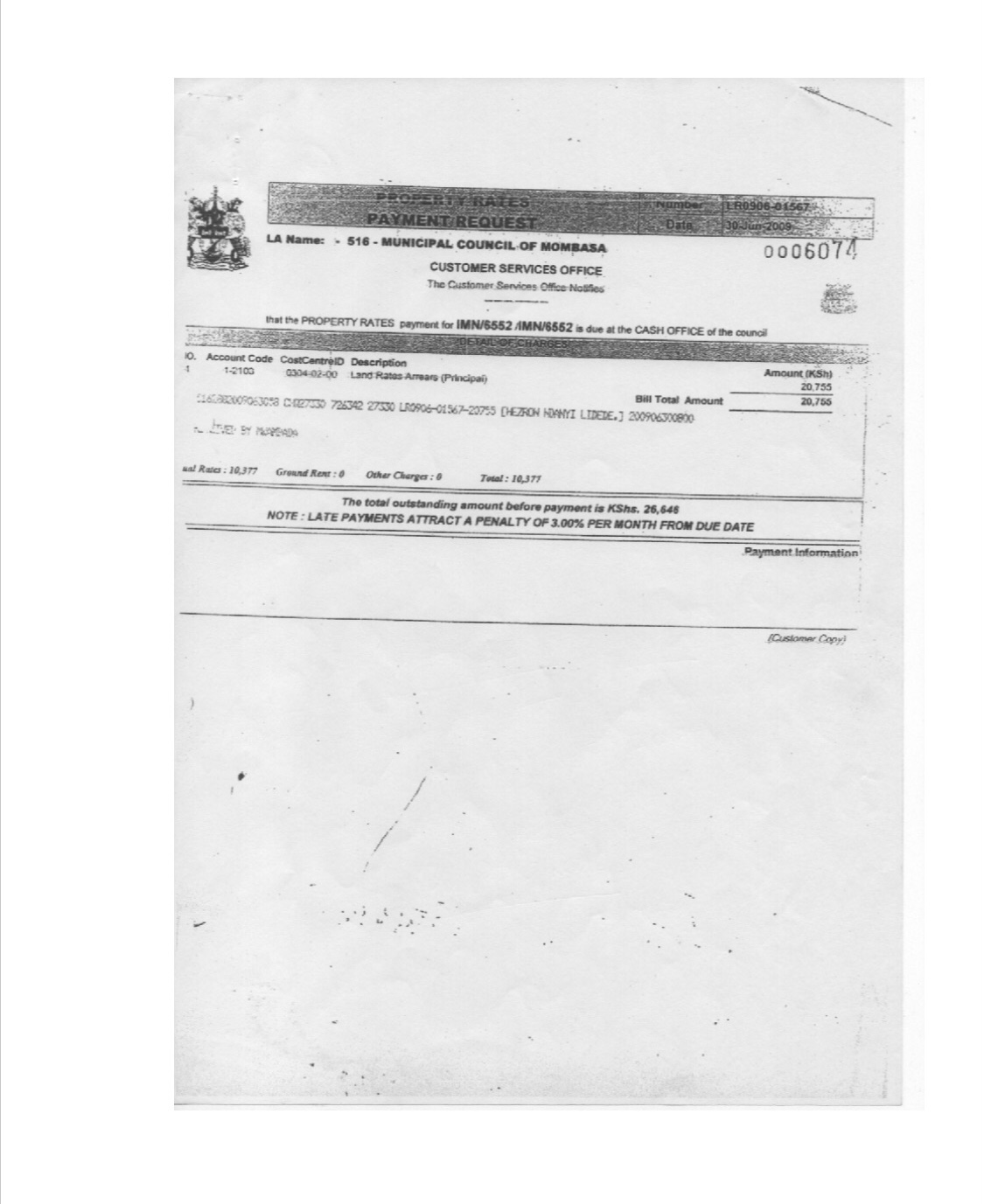 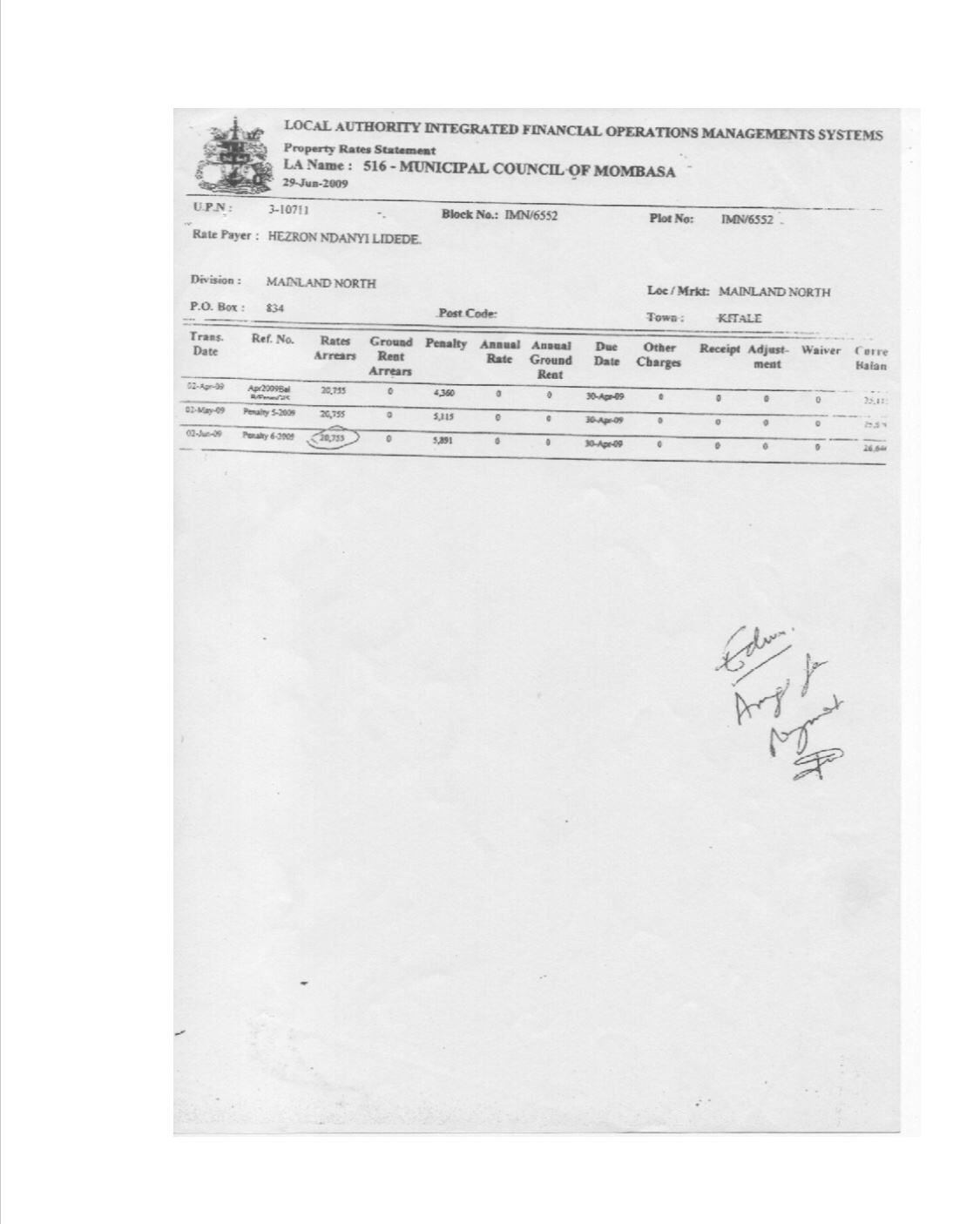 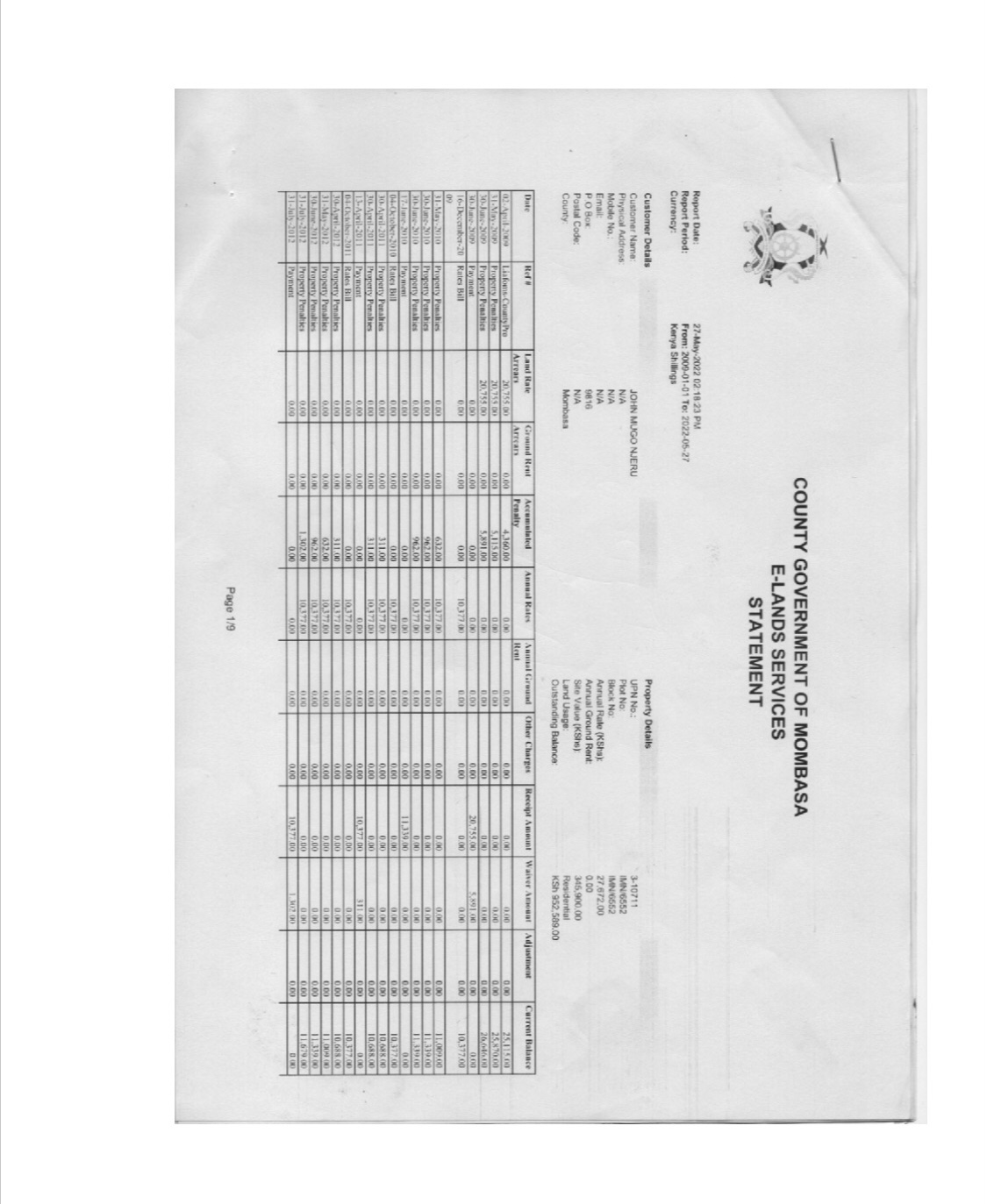 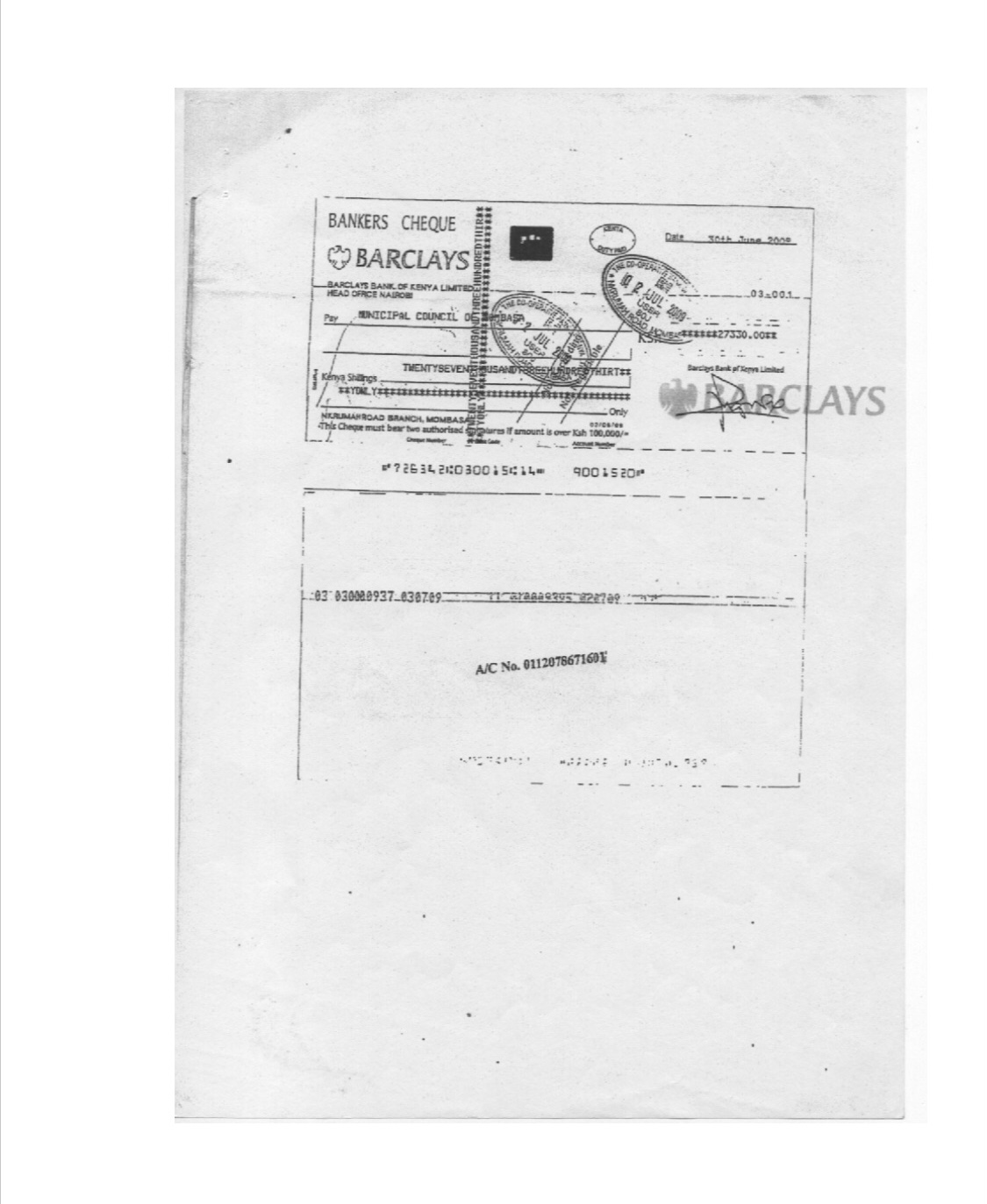 In June last year 2021, a Nairobi court issued a warrant of arrest against a businesswoman Mary Wanjiru who had been linked to a Sh700 million land fraud case for failing to appear for plea taking. Milimani chief magistrate Francis Andayi issued a summons for businessman John Mugo Njeru to appear in court for plea taking in relation to eight counts of forgery and fraud.

The prosecution alleged that Njeru and Wanjiru, jointly with others, with intent to defraud Jambo Holdings Limited a land parcel valued at Sh700 million forged a title in the name of Mary Wanjiru and John Mugo Njeru purporting it to be a genuine title registered at Athi House, Nairobi.

In 2020, he also came to limelight making headlines as among four Nairobi Businessmen who failed to stop then ongoing development of an inland container depot for the Standard Gauge Railway (SGR) in Syokimau Embakasi.

John Mugo Njeru, Byron Kanyu, John Muswanyi and Victor Muiru wanted the court to issue an injuction on grounds that they are the registered owners of the 15-acre land where the dry port is being developed to be used by the new SGR at Syokimau. They said the land was part of a 37-acre land which was allocated to them in July 1998. They processed title for the land and registered it in their names on February 4, 2005.

The court heard that around April 2020, a company known as Syokimau ICD Limited trespassed on the suit property and claimed ownership of part of the same allegedly on the basis it from the Kenya Railways Corporation (KRC). The company was initially known as Mict Nairobi Limited.

In their application, the businessmen contended that the company has started erecting structures on the land and that unless an injunction is issued in their favour, they will suffer loss which may not be compensatable in damages.

But Justice Erick Obaga dismissed their application upon finding that the developing company was already in possession based on a lease from the Kenya Railways Corporation. He said evidence tabled in court revealed that the land had been surveyed in 1969 and in 1971, and was the subject of compulsory acquisition by government.

Among other court cases on Land John Mugo is involved are;

IN THE MATTER OF LAND PARCELS NO. MAVURIA/KIRIMA/1969
COURT CASES
High Court at Embu Judicial Review 51 of 2011
http://kenyalaw.org/caselaw/cases/view/86889

Kenya Insights allows guest blogging, if you want to be published on Kenya’s most authoritative and accurate blog, have an expose, news TIPS, story angles, human interest stories, drop us an email on [email protected] or via Telegram
Related Topics:Hezron Ndanyi LidedeJohn Mugo Njeru
Up Next