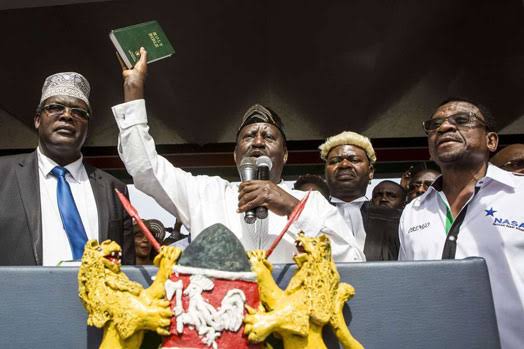 A court has ruled that the Orange Democratic Movement leader Raila Odinga did not break any laws when he was sworn in as the people’s president back in January 2018.

Chief Magistrate Stephen Mbungi ruled that the oath taken by the former prime minister of Kenya after the 2017 general elections was legal. Raila would only have been held accountable if the swearing-in was used to commit crime.

The judge further adds that Raila Odinga did not swear himself in as the president of Kenya which would have then translated to as illegal. “From the content of the oath, Hon Raila Odinga swore himself to the office of the people’s president which does not amount to any crime. He would have only breached the law if he swore himself as the president of the Republic of Kenya,” ruled Mr Mbungi.

The Director of Public Prosecution (DPP) had taken the matter to court accusing Raila of treason. The DPP further claimed that the oath he took was not lawfully administered in accordance with oaths and declaration laws.

The magistrate said that the swearing-in would have only amounted to treason if Raila and the organisers of the event declared their intention to overthrow the Government, a move which two years later has not been taken. He added that the manner in which the President is sworn into office is provided for in the Constitution, and that what Raila and his supporters did was not unconstitutional.

Related Content:  Diplomatic Standoff: Uganda Government Demands Apology From Kenya Over Anti Bobi Wine’s Protests
Kenya Insights allows guest blogging, if you want to be published on Kenya’s most authoritative and accurate blog, have an expose, news TIPS, story angles, human interest stories, drop us an email on [email protected] or via Telegram
Related Topics:
Up Next