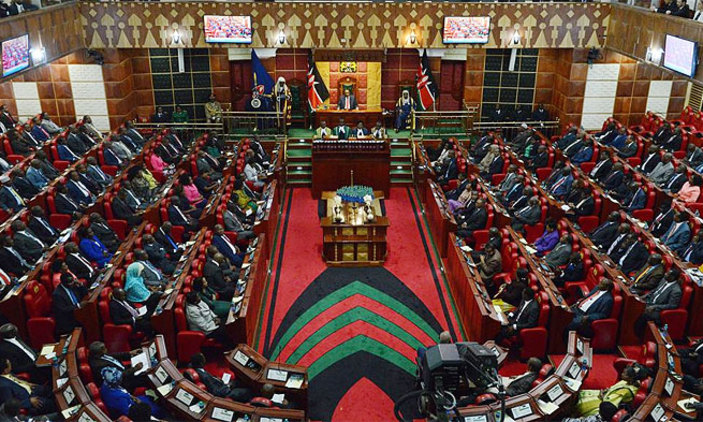 The state appears to be uncomfortable with parastatals engaging international consultancy firms in matters auditing and realignments.

Parliament has directed Auditor-General Nancy Gathungu to order all parastatals under the Ministry of Energy including Kenya Power and KenGen to stop hiring private auditing firms.

The National Assembly raised the red flag that State corporations under the Energy docket continue to advertise for external audit services in breach of the Constitution, the Public Audit Act and the Public Finance Management Act.

The Constitution and the PFM Act, 2012 require the Auditor-General to “audit and report on the accounts of any entity that is funded from public funds.”

The law, however, allows the Auditor-General to outsource audit services after entering into contracts with private audit firms.

But the committee reckons that the firms in the energy sector have been seeking the private auditors on their own.

Abdulswamad Nassir, chairman of the Public Investment Committee (PIC), directed Ms Gathungu to stop the hiring of private audit firms without consultations and approval of the Auditor-General.

PIC issued directive to disengage Private auditors as they were suspected of being pocketed and not capturing financial statements manipulated by management.

The Public Investment Committee raised issues with the move by the State corporations under the Energy docket continue to advertise for external audit services, saying it was in breach of the Constitution, the Public Audit Act and the Public Finance Management Act.

The law allows the Auditor-General to outsource audit services after entering into contracts with private audit firms.

The parastatals however, have been sourcing for private audit firms on their own.

National Assembly Speaker Justin Muturi also questioned why private audit firms have always given the parastatals a clean bill of health at a time when the cost of electricity was skyrocketing.

He said that private auditors were always returning ‘clean’ accounts for State agencies despite outstanding audit queries and procurement irregularities.

He called upon the house in its oversight role to question why firms which the government has an interest in always run to private entities when it comes to audit alluding that they hide a lot of dirt in the manipulated report to read clean.

Kengen that was recently on the spot over flawed recruitment process of staff is on the radar over the audit reports that in the recent past has given them a clean template. MPs now want KenGen, Kenya Power and other state agencies in the energy sector to be audited by the auditor general herself for a clear view instead of manipulated reports.

For instance, Deloitte & Touche that handles KenGen was recently busted for allegedly manipulating data for a client. In a leaked document involving Deloitte, one of the largest accounting firms in the world, began circulating on the Chinese social media. The 55-page document (in Chinese), written by a person calling themselves YW who says they were a Deloitte employee at the company’s Beijing office, outlined “serious problems of auditing professional ethics and quality” going back to 2016.

In the document, YW writes: “I have communicated with Deloitte management and Deloitte Reputation and Risk Group (RRG) more than 30 times for 2 years since 2018, requesting Deloitte to deal with audit quality reporting issues properly.”

“However, it is a pity that up until now, all of the people involved in the reporting issues are still engaged” in other important auditing engagements “and have been promoted accordingly.” The employee seems to imply that managerial conflicts of interest may have resulted in inaction up until now.

Among the main accusations which include 10 specific episodes, three of them by another employee who has since resigned is the failure to abide by proper auditing protocol. Auditors took major shortcuts, the report claims, telling their clients that their jobs were thoroughly completed when they were not.

International business consultancy and accounting firms have reached an unchartered phase in the business life cycle. These behemoths of commerce, often tasked with keeping both public and private sector players in check, have now grown powerful enough to pose a threat to entire countries, if not the global economy. After decades of predatory and self-serving behavior, resistance is growing that may well ring in the end of the consulting firm’s era.

India may have provided the initial impetus for pushing the consultancy system over the brink. The country is currently in the process of banning one of the so-called Big Four accountancy and consultancy firms, Deloitte, for aiding financial fraud. New Delhi says it has detected several violations of auditing standards by Deloitte while investigating IFIN, a unit of Infrastructure Leasing & Financial Services, whose debt defaults in 2018 triggered widespread fear of financial contagion.

Fraud at IFIN was “nothing short of organized crime,” India’s Ministry of Corporate Affairs has charged, with the firm “actively aided and abetted by the statutory auditors.” While Deloitte is contesting a government call for a five-year ban on new business, it appears the ministry plans to invoke section 140 (5) of the Companies Act to debar the firm for alleged malpractice.

In 2019, Deloitte was fined£415,000 ($518,000) by Malaysian regulators for audit failures linked to the scandal-ridden state fund 1MDB. Established more than a decade ago, the $583-million investment was meant to finance much-needed development projects across the country. Thanks to endemic corruption, 1MDB accumulated losses of $10 billion, emerging as one of the largest cases of gross corruption in the region. The Malaysian Securities Commission has since struggled to decide if Deloitte was “aiding and abetting” in the graft or was “merely negligent.” As far as the regulator is concerned, there is no third option.

Harrowing stories from South Africa highlight the ruthlessness of these firms evidently operating in a morality-free void. Not shying away from helping corrupt politicians and their agendas, under former president Jacob Zuma major consulting players have all been shown to have dirtied their hands in aiding Zuma’s project to effectively “capture” the South African state.

In the same light of international firms consultancy, the government shot down a proposal by Kenya Power to single-source three international legal and consultancy firms the utility company had picked to review expensive power purchase agreements (PPAs) blamed for high consumer bills.

Documents presented in Parliament show that the National Treasury, the Attorney-General and the Procurement Agency slammed breaks on Kenya Power’s quest to directly hire the services of Michael Sullivan, the Queen’s Counsel (QC) Howard Barrie, and Mr Jude Kearney.

Kenya Power’s decision to seek the services of the experts followed the March 21 decision by President Uhuru Kenyatta to appoint a taskforce to review PPAs signed between Kenya Power and all electricity generators with a goal of renegotiating the energy prices and other terms downwards.

The 15-member team, chaired by boardroom veteran John Ngumi has recommended a number of reforms including renegotiation of all PPA’s contracts that Kenya Power has signed with electricity producers that also dictate modes of engagement, including payment.

The proposals that are expected to reduce the cost of power by 33 percent – from Sh24 per unit of electricity to Sh16 per unit by December this year.

Kenya Power signed contracts committing it to take more electricity than it can sell, leaving it to pay onerous capacity charges to energy producers even when their plants are idle.

Mr Howard Barrie and Mr Jude Kearney were to be hired to advise KPLC and the Presidential Taskforce on the review of the PPAs and the renegotiation strategy.

PWC was to undertake financial analysis of PPAs, McKinley was to be hired as management consultant while Boston Consulting Group was to offer the taskforce “a wealth of cross-cultural experience.”

Members of the Energy committee, who probed the PPAs, have now questioned why KPLC wanted to bring in the international experts at the time the taskforce was conducting a investigations into the PPAs.

Consultancy and accountancy firms are the only ones big enough to audit states or multinational corporations (MNCs), and have thus developed into quasi-cartels capable of influencing the paths of entire countries through their intimate connections to the centers of power and decision-making.

While their work as auditors is no doubt crucial to providing accurate reports to shareholders, they have a broader responsibility to simultaneously safeguard economies on a national and global scale. That is, after all, what they are paid to do. Or so the theory goes.

In reality, they have aided those with financial interests to avoid taxes and cook the books since their first conception in the ancient economies of Mesopotamia and Babylonia.

Kenya Insights allows guest blogging, if you want to be published on Kenya’s most authoritative and accurate blog, have an expose, news TIPS, story angles, human interest stories, drop us an email on [email protected] or via Telegram
Related Topics:Auditor GeneralKenGenKenya Power
Up Next