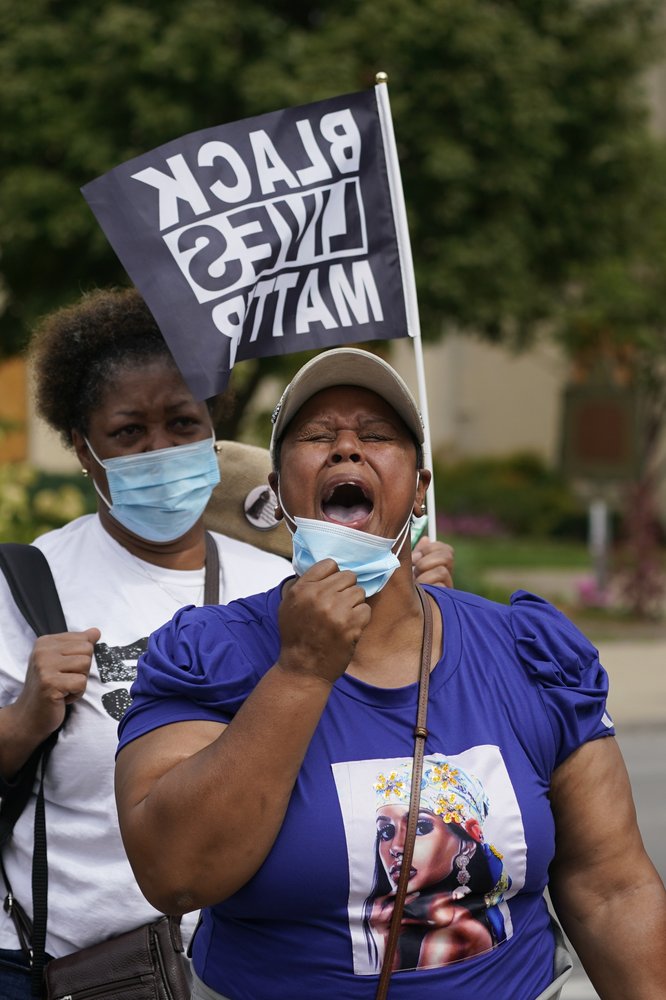 A woman reacts to news in the Breonna Taylor shooting, Wednesday, Sept. 23, 2020, in Louisville, Ky. A grand jury has indicted one officer on criminal charges six months after Taylor was fatally shot by police in Kentucky. The jury presented its decision against fired officer Brett Hankison Wednesday to a judge in Louisville, where the shooting took place. (AP Photo/Darron Cummings)

LOUISVILLE, Kentucky (Reuters) – A Kentucky grand jury considering the March killing of Breonna Taylor, a Black medical worker, in her home voted on Wednesday to indict one of three white police officers for wanton endangerment, the state’s attorney general said.

The officer indicted was Detective Brett Hankison, who faces up to five years in prison if convicted, Attorney General Daniel Cameron said at a news conference.

Hankison was with two colleagues when they shot into the apartment of Taylor, 26, killing her in front of her boyfriend.

The two other officers, Sergeant Jonathan Mattingly and Detective Myles Cosgrove, were not charged because the investigation showed that under Kentucky law they “were justified in the return of deadly fire after having been fired upon by Kenneth Walker,” Taylor’s boyfriend, Cameron said.

“There is no doubt that this is a gut-wrenching, emotional case,” Cameron, a Black Republican, said at a news conference.

Taylor’s death, alongside that of George Floyd, a Black man who died in May after a white Minneapolis police officer knelt on his neck, helped spark a nationwide wave of protests demanding racial justice and an end to the use of excessive force by law enforcement.

Crowds gathered to listen to the announcements at a memorial to Taylor in Jefferson Square Park, the site of regular demonstrations against police brutality that have spread across the nation.

Ahead of the announcement, Louisville Mayor Greg Fischer announced a 72-hour curfew for the city beginning at 9 p.m., with exceptions for those going to work or to seek medical treatment.

“I urge everybody to choose peaceful and lawful protest,” Fischer, a white Democrat, said shortly before the announcement. “This is obviously a really important time for our city. I want us to think about our kids and our grandkids and get this right.”

In creating his account of Taylor’s death, the attorney general said his investigators had no video footage from the shooting.

“Therefore, the sequence of events had to be pieced together through ballistics evidence, 911 calls, police radio traffic and interviews,” Cameron said.

The three officers involved did not take part in the obtaining of the warrant, he said. They knocked on Taylor’s apartment door and announced their presence outside, which Cameron said was corroborated by a neighbor who witnessed the arrival. Getting no answer, they “breached the door.”

Mattingly entered first, and at the end of a corridor saw Taylor and her boyfriend, Kenneth Walker, with Walker pointing a gun.

Six bullets hit Taylor, though there is no “conclusive” evidence that any came from Hankinson’s gun, Cameron said.

Bullets fired by Hankison traveled into a neighboring apartment.

In June, the Louisville Metro Police Department fired Hankison. Interim Police Chief Robert Schroeder, who is retiring on Oct. 1, wrote in the termination notice that Hankison “displayed an extreme indifference to the value of human life” when he “wantonly and blindly fired” into Taylor’s home.

The department reassigned the two other officers to administrative duties.

Louisville police obtained the warrant to enter Taylor’s apartment from a judge as part of an investigation into a drug ring at another house elsewhere in Louisville. They told the judge that they believed that one of the men suspected of selling drugs had used Taylor’s apartment to receive packages.

Related Content:  Is Man With Multiple IDs In The COVID-19 Exposé An NIS Agent?

Taylor had previously dated a suspected drug seller but had severed ties with him, according to her family.

She and Walker, were in bed when police broke down her door with a battering ram shortly after midnight.

Walker has been charged with attempted murder. His lawyer has said there is evidence the bullet in Mattingly’s thigh was shot by one of his colleagues, not by Walker, but Cameron disputed this on Wednesday.

Images of Taylor have become a familiar sight at the daily protests against police violence in cities across the United States. Last month, the influential actress and television mogul Oprah Winfrey featured an image of Taylor on the cover of O, the Oprah Magazine, calling for prosecution of the police who killed her.

Louisville has agreed to pay $12 million to Taylor’s family to settle a wrongful-death lawsuit, Mayor Fischer announced earlier this month.

Didmus Barasa Pays Owner Of Car He Was Accused Of Stealing