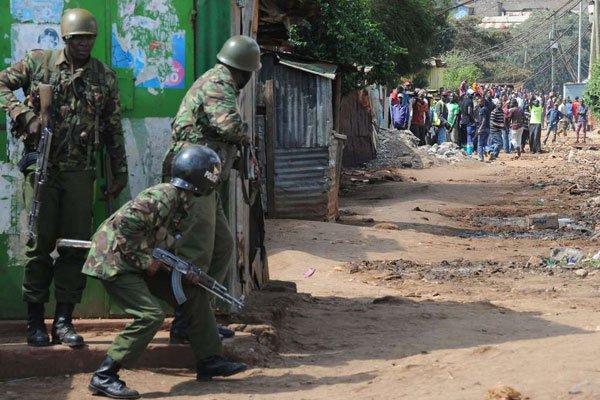 Cases of police extrajudicial killings have escalated in The past months since The August botched presidential elections. While the exact number of victims of police bullet remains unclear, what is clear is The police have used extreme force while dealing with opposition protesters. These had resulted in deaths, severe injuries, sexual offenses, a report by Kenya Human Rights Commission put sexual offenses cases they’ve handled in this period at sixty.

According to available statistics, about 70% of Kenyans boycotted the fresh elections on the 26th October, despite lowest turn out in history, IEBC held the election that majority steered off, the commission postponed elections in four counties in Nyanza citing security issues even though the reality is most parts of the counties boycotted. Nyanza and parts of Nairobi slums received biggest security deployment including the army. The past few days it has been nothing but mayhem with deaths and injuries reported in Nyanza and Western. Police brutality is at an all-time high and it is done with greatest levels of impunity.

The latest police killings are a repeat of a post-election crackdown after the Aug. 8 election, in which 33 people were killed by police in Nairobi and up to 67 people were killed nationwide, according to a joint report by Human Rights Watch and Amnesty International. The report gave frightening revelation that in most cases, the police took away bodies of their victims to unknown places thereby hiding evidence of police killings. In Kisumu police are accused of killing them dumping bodies in the lake.

Related Content:  The Agony of 3 Kenyans Illegally Jailed in Rwanda

In the latest investigative reporting done by The VICE an American publication, the killings of these supporters don’t just happen but is a coordinated piece of evil work. VICE News spoke to a 12-year veteran of Kenya’s police force, a member of a plain-clothes intelligence unit(NIS), who works in one of the slums that saw the most bloodshed in August. Counter to the police and government narrative, this officer said these police killings are calculated. Detailing the coordination between his “Spiv” unit and police killing squads, the officer said police forces seek to instill fear in restive communities by eliminating protest organizers and known opposition supporters.

“We gather intelligence and we know where he stays or where he usually spends [time] in a bar or in a hotel. So you can lay an ambush or you can go and get into the house and he’ll be killed,” the officer said.

He added that intelligence officers often rely on neighborhood informants.

The NIS officer talking to VICE news revealed that after an incident, police must file a basic report, detailing the crime and evidence. “Most of the scenes are stage managed,” the officer said. “Maybe he was found with a firearm or a homemade gun… maybe get some bullets. Then the scene of crime officers come and photo the body.”

I talked to a Red Cross source who revealed to me how scared victims of police brutality are to seek justice as this equals to committing suicide. A particular case is rape victims from the fatal police raid After the August poll. Kenya Insights learned of numerous rape victims who are stuck deep in the slums too scared to seek medical services elsewhere not report the tape case to any police station. So the Red Cross team have to follow up on them for treatment and trauma management. It’s not limited to the ladies, anyone assaulted by Police would rather die in the house than reporting and seeking justice as that equals attracting more trouble most likely, death.

If any member of the family takes the risk to seek justice, they risk being profiled, trumped charges and eventually killed to avoid the officer getting prosecuted. This is the exact case that led to the killing of lawyer Willie and his police brutality victim he was presenting. The police officer who was under investigations conspired to kill his accuser and the lawyer, both killers are behind bars now.

In the cases of extrajudicial killings in the slums, going to report or complaining or questioning circumstances surrounding a friend or family member’s death will earn you entrance into the police hit list. The intelligence officer described that there are practices designed to prevent victim’s families from seeking answers to questions about their lost loved ones.

“If someone comes to our office to seek justice he’ll be marked as a criminal and he’ll be eliminated,” he confirmed.

Call Your Baba To Come and Help You Said Police As They Killed, Report Say Death Toll Higher As Police Took Away Unrecorded Bodies.