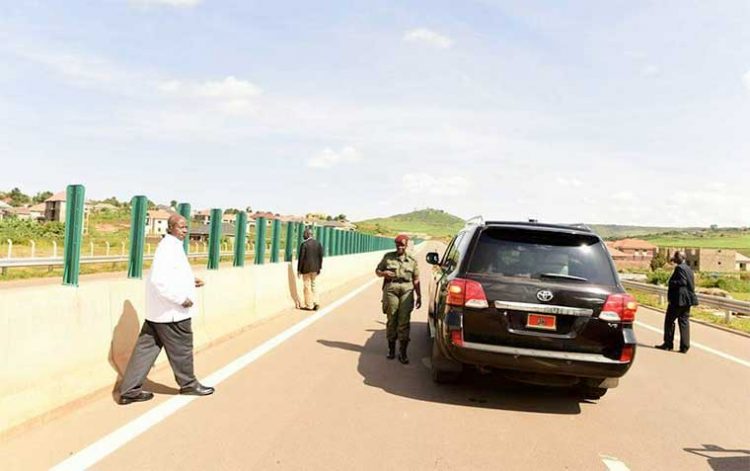 Fying squad have recovered and returned President Museveni’s car that was stolen seven months ago by Kenyans.

Museveni had contacted Uhuru informing him about his Black Toyota Kluger that was stolen from his fleet in November.

Investigators of this site have been informed that Uhuru Kenyatta was forced to dispatch the flying squads after ordinary Police failed to ensure that the car is recovered.

The Kenyan flying squad took the matter traced the car and found it in Gilgil. Flying squad trailed the carjackers for weeks and laid a trap at the Gilgil weighing bridge.

Also read: Nairobi Woman Confesses How She Steals From Her Husband When He Gets Home Late and Drunk

But someone from the public or their deep informers in the forces tipped the suspected car thieves that they were being trailed. They packed the car few meters before the weighing Bridge and vanished without leaving any trace of evidence in and on the vehicle.

The vehicle currently at Nairobi flying squad offices, underwent further investigation and comparison of the chases and the numbers.

The dusting of the vehicle didn’t reveal any traces of finger prints. Meaning those who have been using the car for months now are deep in the web of carjacking mastermind.

The car was verified and chases matched with the documents and Kenya flying squad Commander handed over the vehicle to a team that had been sent by Museveni.

Related Content:  How Forkbombo, Kenya’s most Lethal Hackers Group was formed by a DCI Officer and how it has since mutated in Africa.

One of Museveni’s site that Wanyama handle posted “Our machine is back, it has been a long chase, 8 months to be exact,”

This is not the first time these inter border car thieves are hitting the lime light. In September 2014, President Uhuru Kenyatta lost his chase car, a BMW.

The BMW had it’s tracking system vandalized and the vehicle transported to Uganda for a black market trade in.

It took the intervention of Museveni and Uganda Police forces with help of their Kenyan Cyber-crime CID department to recover the BMW.

Flying squad traced the car intercepted it at Boma N’gombe, Kilimanjaro with the help of Tanzania Police.

These State carjackers seem to be enjoying a blanket of cover from State personnel and some getting advised about every safety measure they should take to avoid arrest or being identified by the Police.

Kenya Insights allows guest blogging, if you want to be published on Kenya’s most authoritative and accurate blog, have an expose, news TIPS, story angles, human interest stories, drop us an email on [email protected] or via Telegram
Related Topics:Flying squadKenyaPresident MuseveniTanzaniaUgandaUhuru Kenyatta
Up Next