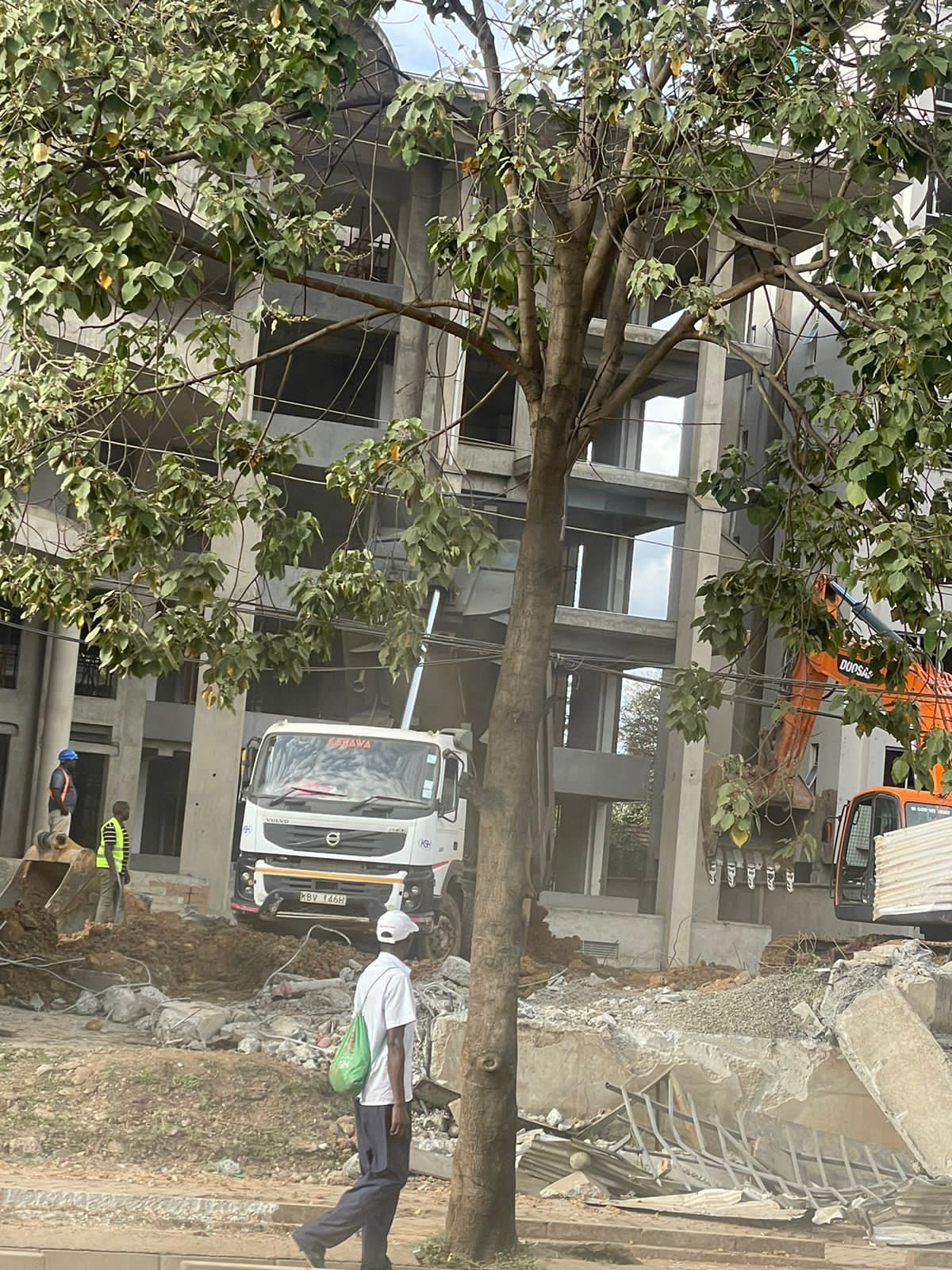 Demolition of the Multichoice offices.

A contractor has protested plans to demolish a Sh1 billion building belonging to MultiChoice Kenya, which is subject to an ongoing court dispute.

Cementers limited questioned wondered who had authorised the demolition of the building situated along Oloitoktok Road at Kileleshwa, Nairobi.

In a public notice, the company through Nderitu & Partners warned anyone from offering the demolition services. 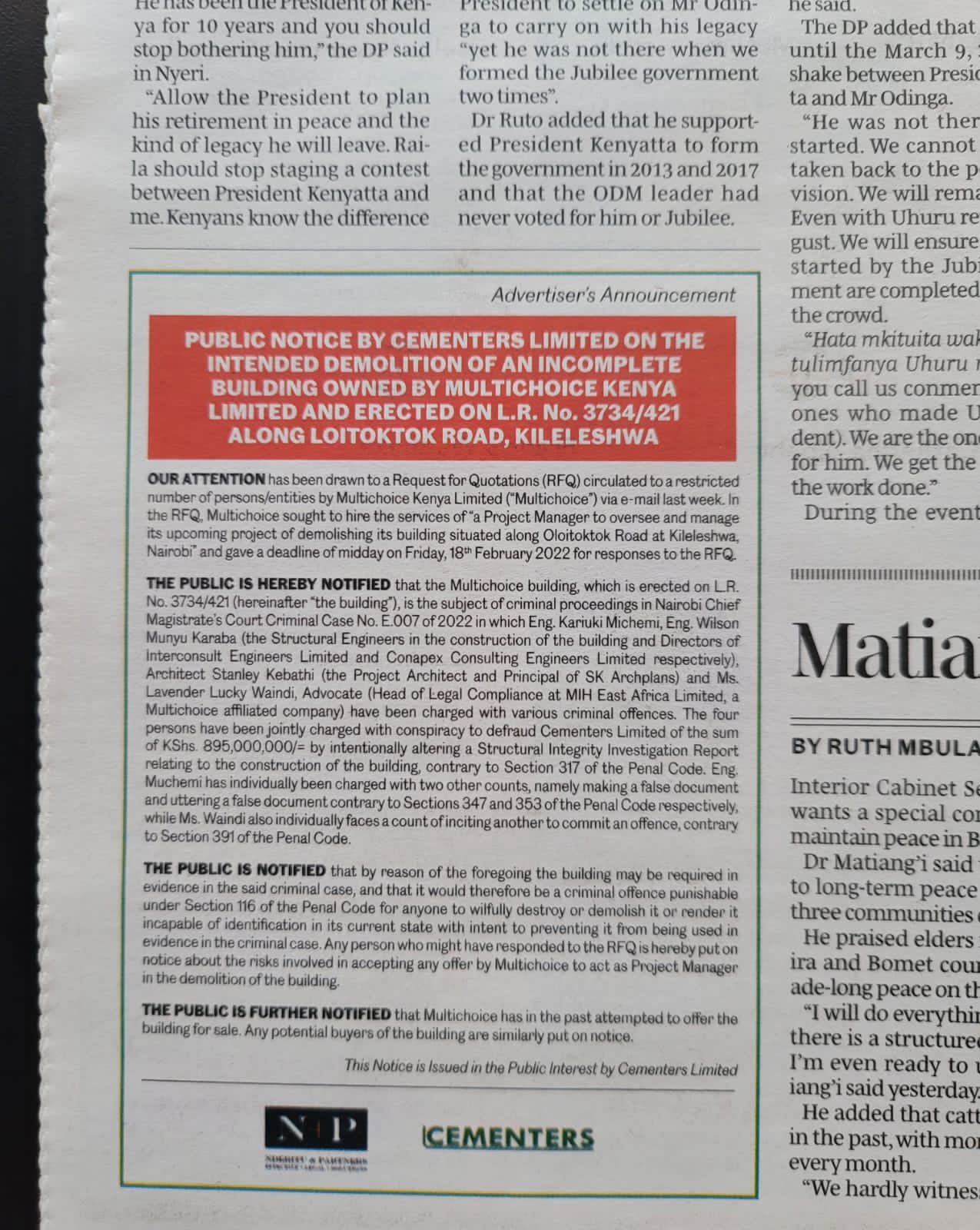 Nderitu said the building might be required as exhibit in a criminal case where four people are charged with conspiracy to defraud MultiChoice Kenya by intentionally altering the structural Integrity investigation report on a proposed construction of an office block for the company.

MultiChoice later sent a statement saying it was following directions to bring down the building because it was dangerous.

“The proposed MultiChoice Kenya Offices of which Cementers Limited was the contractor, are being demolished pursuant to Enforcement Notices issued by the County Government of Nairobi condemning the said building and requiring its immediate demolition due to safety concerns,” the payTV company said in a statement.

MultiChoice said the exercise is being carried out with utmost professionalism and care to the workers involved and the communities neighbouring the site.

“The Building is not an exhibit in any of the ongoing civil, arbitral and criminal cases between the parties,” MultiChoice said.

” Any person who might have responded to the RFQ is hereby put on notice about the risks involved in accepting any offer by Multichoice to act as Project Manager in the demolition of the building”, said the law firm.

The public was further notified that Multichoice has in the past attempted to offer the building for sale. Any potential buyers of the building are similarly put on notice. 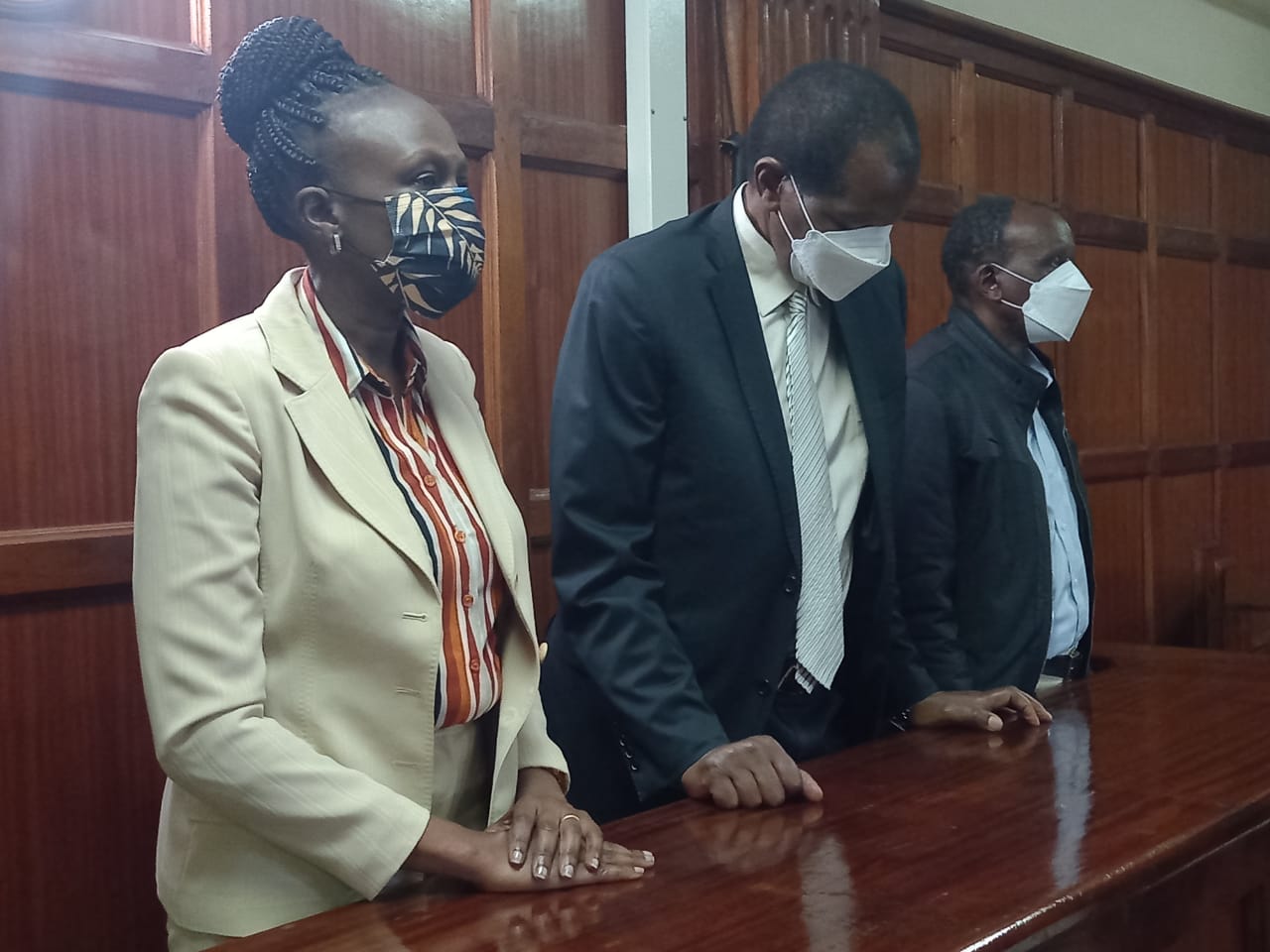 The law firm says that there was a request for Quotations (RFQ) sent to a restricted number of persons or entities by Multichoice Kenya Ltd (“Multichoice”) via e-mail last week and in the RFQ, Multichoice sought to hire “a Project Manager to oversee and manage its upcoming project of demolishing its building situated along Oloitoktok Road at Kileleshwa, Nairobi” and gave a deadline of midday on Friday, February 18, 2022 for responses to the RFQ.

Among those charged in court are Wilson Munyu Karaba, Stanley Kibathi, an architect and city lawyer Lavender Lucky Waindi appeared before Milimani Chief Magistrate Wendy Kagendo. They denied the charges. A fourth suspect, Eugene Kariuki Muchemi has so far has failed to appear in court to plead to the charges.

Waindi is accused that on April 6, 2017 at unknown place incited Kariuki Muchemi to extract part of the structural Integrity investigation report on proposed construction of Office block for Multichoice Kenya ltd.

They are accused of internationally altering a structural integrity investigation report on proposed construction of the office, an offence they allegedly committed on diverse dates between February 1 and April 13, 2017 at unknown place.

Related Content:  How Airtel Employees Conspired To Steal Sh670M From The Teleco

The accused persons include directors of Interconsults Engineers ltd, Connapex Consulting Engineers ltd, S.K Archplans and Head of legal at MIH East Africa. The charges stated that they jointly conspired together to defraud Cementers Kenya ltd. 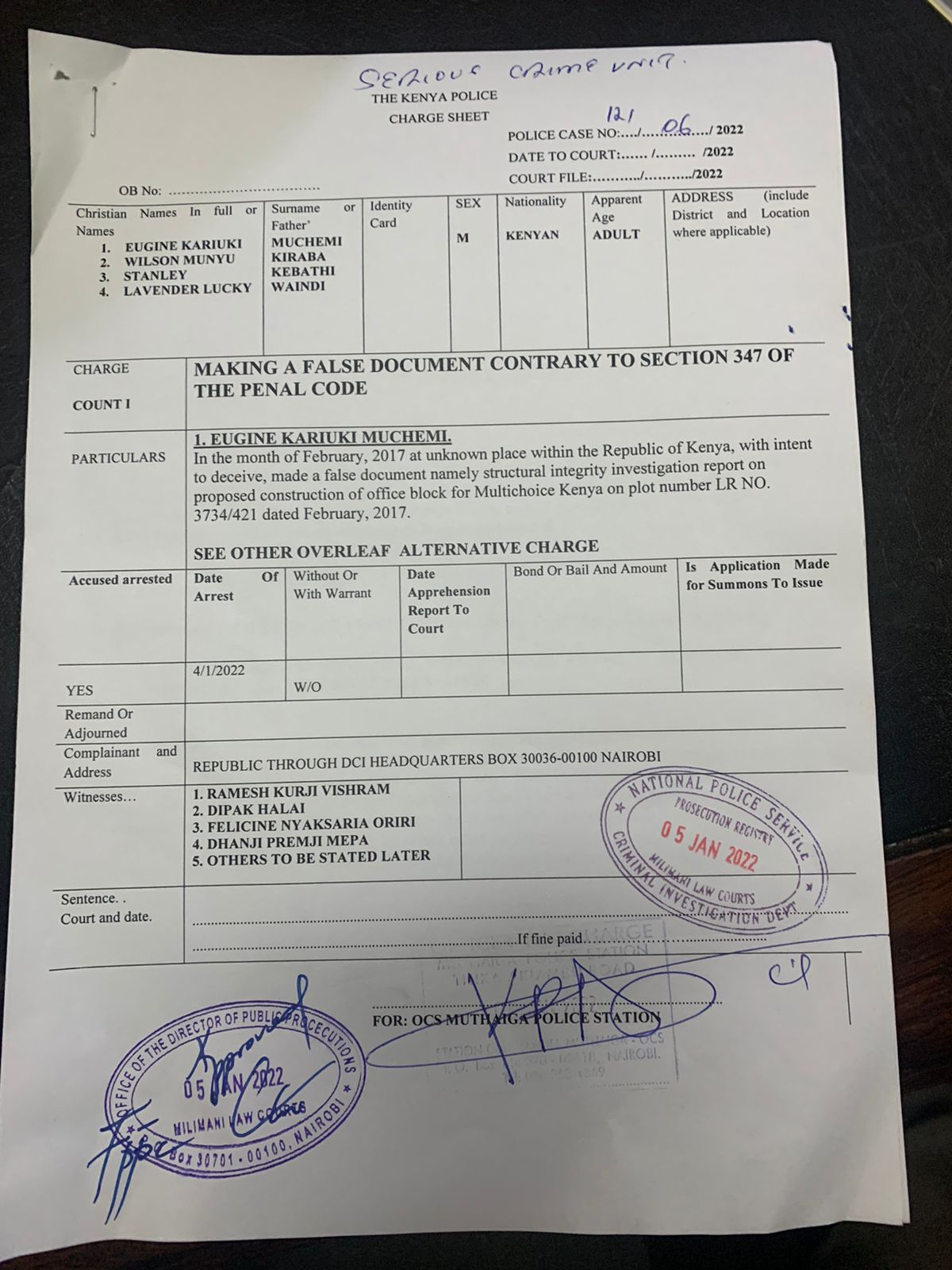 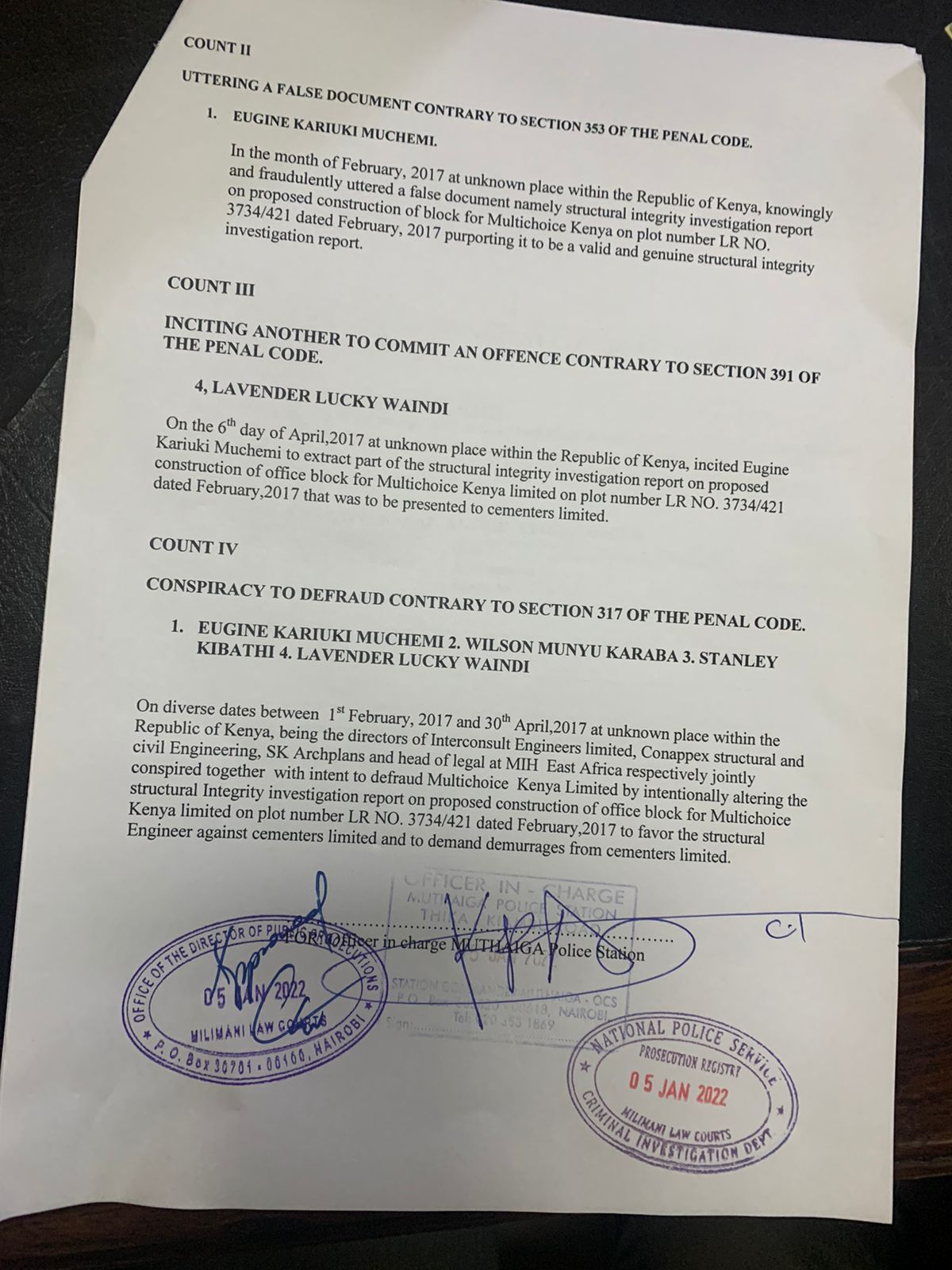 Cementers Limited is associated with Ramesh Kurji Visram. He says he has lost a lot from the bad reputation in the case with many contracts passing him.