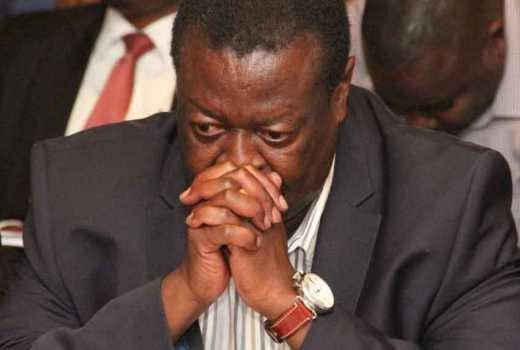 Transport Chief Administrative Secretary (CAS) Chris Obure, who is facing charges in connection with the scandal, told an anti-corruption court that it is Musalia Mudavadi, who initiated the Anglo Leasing project when he served as Transport minister in President Daniel arap Moi’s Kanu government. Obure was the Finance minister.

According to Obure, Amos Wako, who was the Attorney General, gave the green-light for the project, in his capacity as the chief legal advisor of the government.

Standing in the dock, Obure told the court that Mudavadi wrote to him on May 9, 2002, seeking direct procurement of equipment for upgrading postal services in the country.

The CAS told the court that Mudavadi sought his permission to use direct procurement for the equipment from an American company known as Spacenet to connect more than 900 postal offices in Kenya.

“l first got involved in the procurement in this case on May 9, 2002, when I received a letter from then Transport and Communications minister Musalia Mudavadi requesting that l approve single-sourcing and direct procurement for the contract,” Obure told the court.

According to the Mudavadi’s letter, the Postal Corporation of Kenya (PCK) was still largely dependent on Telkom Kenya, a situation that hindered its growth and profitability, Obure told the court.

As such, the ministry wanted to develop PCK as an autonomous entity and that would require the financial assistance of the government.

“Mudavadi informed me in the letter that it was the government’s intention to develop and upgrade the Postal Corporation of Kenya,” Obure told the court.

Obure, who is charged alongside former Transport Permanent Secretary Sammy Kyungu, said he was authorised by Mudavadi to sign the contract document on behalf of the ministry. Obure and Kyungu face several charges of corruption, abuse of office and breach of trust.

Denying that he abused the powers of his office as Finance minister, Obure said he believed Mudavadi when he told him the government had embarked on a programme to upgrade postal services in the country.

Obure, who was led in his defence by lawyer Chacha Odera, told the trial magistrate that Mudavadi told him that postal services would be improved through data network upgrading.

He said Mudavadi asked him to offer him assistance in achieving the government’s noble goal.

The court heard that the new equipment would enable the delivery of telegram and electronic services including transfer of salaries for teachers and other public servants.

“Mudavadi, through the letter, told me that it would cost more than Sh900 million to upgrade postal services in the country,” said Obure.

“The new technology, once put in place, would ease transfer of payment for teachers and members of TSC and other government entities,” he added.

He said that Mudavadi’s request to have him approve the direct procurement in the single sourced service was necessitated by the fact that the Ministry of Finance was the financier.

“Only the Finance ministry is mandated to negotiate and enter into contracts with foreign firms on behalf of the government and that is why the Transport minister wrote to me,” said Obure.

The CAS informed the court that upon receipt of the letter, he sought technical advice from the Director of Procurement in the ministry.Four days later, with the advice of technocrats, Obure wrote back to Mudavadi asking to be supplied with further documents, including a copy of the draft contract and details of the terms of the project financing. He also sought justification for seeking direct procurement.

“This would help me analyse and understand the extent of the procurement and whether it fell within the parameters allowed for borrowing,” Obure explained.

The court heard that the documents were forwarded to the procurement department for technical advice and action.

He noted that the project involved transfer of huge data and had internal security considerations given the potential threat of computer hackers.Obure said he also sought legal opinion on the project from Wako, who told him the contract was legally viable.

He said that upon getting the AG’s nod, he signed the contract documents committing the government. Later the government paid $11.7 million (Sh924.3 million) for the supply of VSAT communication network for PCK. Hearing continues.

Kenya Insights allows guest blogging, if you want to be published on Kenya’s most authoritative and accurate blog, have an expose, news TIPS, story angles, human interest stories, drop us an email on [email protected] or via Telegram
Related Topics:Amani National Congress (ANC)Chris ObureMusalia Mudavadi
Up Next