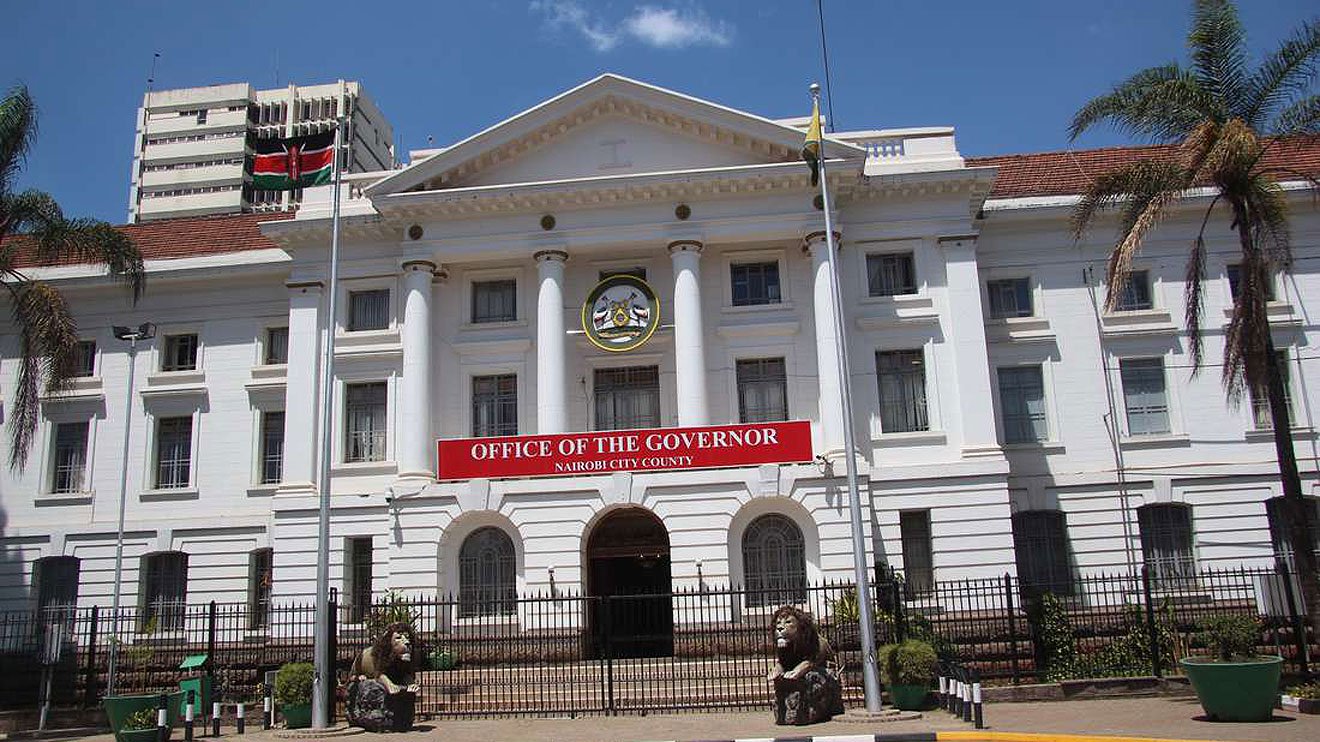 Nairobi County is investigating Sh6.97 billion in pending bills owed to law firms from cases handled by lawyers since 2017.

The county’s committee on Justice and Legal affairs says 130 law companies are demanding Sh6,971,837,929 from the county government.

Documents presented on the floor of
House indicate that four firms are
demanding Sh3.23 billion of the total
6.97 billion.

On October 27, 2021, Clerk of the Senate wrote to Governor Anne Kananu requesting a statement over an alleged illegal payment of legal fees for outsourced law firms by the Nairobi City County Government.

Among the matters Senate wanted clarified included concerns why payments to law firms constituted 31 per cent of total pending bills
amounting to Sh795.9 million from the Sh2.5 billion issued to clear pending bills for the 2018/19 financial year.

The Nairobi County Attorney Lydia Kwamboka says an in-house council will save the assembly huge bills going to lawyers.

“I have been wanting to create an inner
house team of lawyers in order to curb
the number of cases we give to external
lawyers,” said Kwamboka.

Sectorial Committee on Justice and Legal Affairs has recommended settling all verified pending bills owed to law firms between 2017 and 2020.
The county has also been grappling with
pending bills inherited from the defunct
City Council.

For lawyers it never matter whether the
case was won or not. They have to be
paid.

The issue of law firms and row with MCAs didn’t start today, it has been a thorn in flesh with officials accused of working with law firms in fictitious cases to defraud the county.

In January, Ethics and Anti-Corruption Commission (EACC) has launched investigations into multi-million shilling dealings between 25 law firms and the Nairobi County government.

The probe was focused on payment of legal fees by City Hall to the firms between 2013 and 2020.

The EACC, in a letter dated January 21, wants the county secretary to furnish it with the specific case files handled by the 25 law firms between 2013 and 2020, including letters of instructions and contract agreements.

“The commission is undertaking investigations at Nairobi City County in respect of payments of legal fees to the following firms. To facilitate our investigations, kindly but urgently furnish us with the original documents in respect to the mentioned firms,” states the letter. 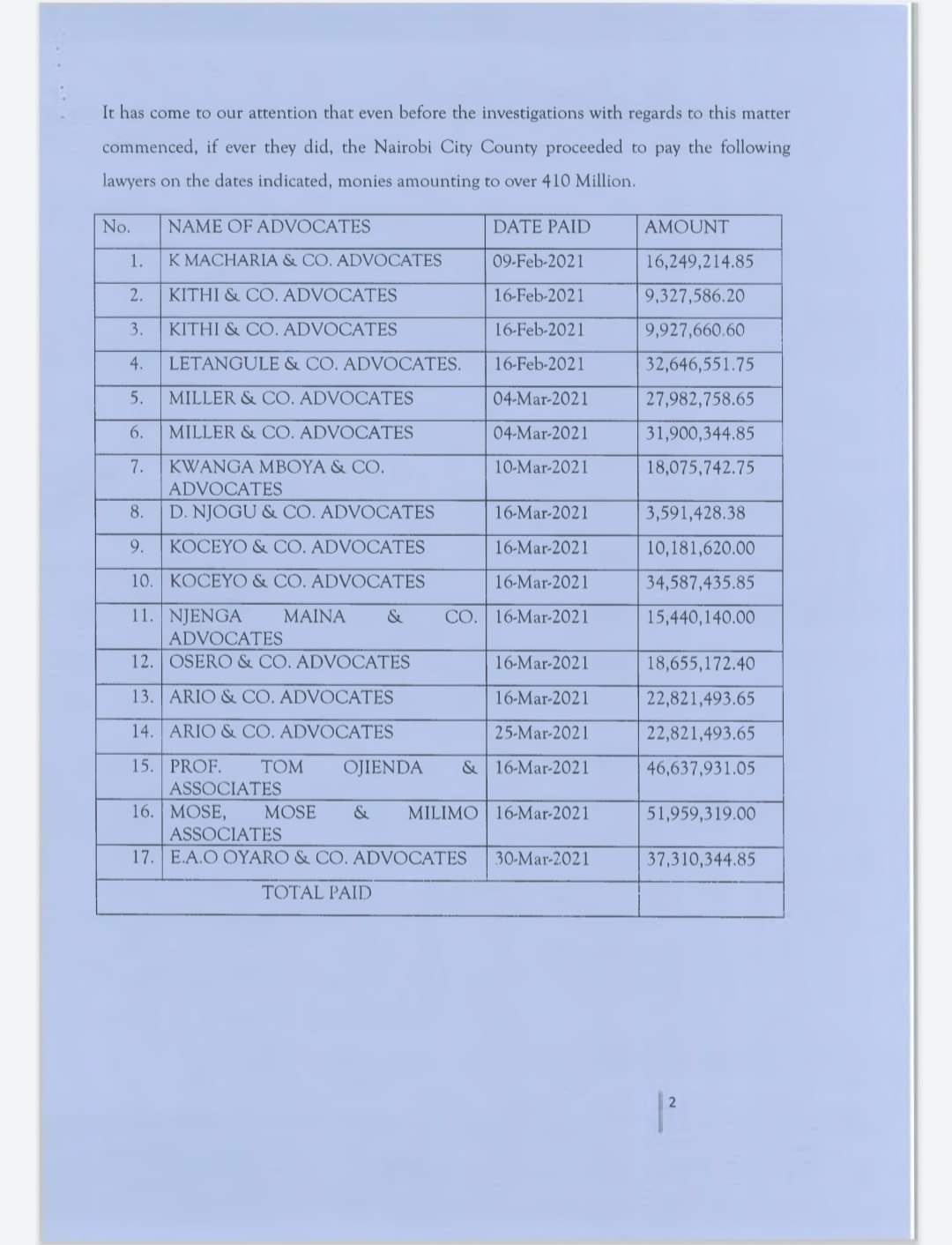 The EACC further asked to be furnished with all payment vouchers, cheque counterfoil and a list of pre-qualified law firms for the period under investigation.

This is in addition to minutes approving the list of pre-qualified law firms and any other documents relevant to the probe.

The probe comes a few months after Nairobi MCAs raised concerns over the payment of large amounts of money to some law firms yet the county has not won any court cases recently.

The ward representatives also made allegations of favouritism by City Hall in the clearance of lawyers’ bills instead of small scale suppliers owed less money.

City Hall paid legal fees to the tune of Sh795.9 million out of the Sh2.5 billion allocated for clearance of all pending bills, locking out other suppliers and contractors.

As a result, MCAs, through a motion by Silvia Museiya (nominated), called on the county executive to come up with a policy to streamline outsourcing of legal services.

The legislators alleged that the outsourcing has turned into a business, with some lawyers colluding with officers in the executive, including those in the office of the county attorney, to siphon money from the county.

They claimed an unnamed law firm was paid Sh250 million despite not carrying out any legal transaction with the county government.

Painting a grim picture of the state in the legal department at City Hall, the Auditor-General’s report for the 2016/2017 financial year revealed the department spent Sh592.4 million on unauthorised payments.

According to the report, the department spent Sh645.3 million on legal costs against an approved budget of Sh105 million.

Interestingly, the bulk of the money, Sh314.4 million, was paid to some 12 firms. The payment was not included in the Integrated Financial Management Information System (Ifmis).

The payments were made without documentary evidence, including a total of Sh318.4 million which was sent to several lawyers.

During that financial year, 335 cases were handled by the legal department but only 12 of them were successful. The rest were either withdrawn or lost.

Kenya Insights allows guest blogging, if you want to be published on Kenya’s most authoritative and accurate blog, have an expose, news TIPS, story angles, human interest stories, drop us an email on [email protected] or via Telegram
Related Topics:Cecil MillerCity HallDonald Kipkorir
Up Next