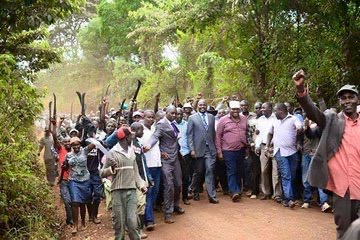 While he was supporting the handshake candidate Imran Okoth, the MP for Gatundu seem to have been irked by violence meted on a section of Jubilee leaders who were affiliated to Mariga in the Kibra elections.

Former Kakamega Senator and Kimilili MP Didmus Barasa were roughed up by a section of ODM supporters who had accused them of bribing voters.

Kuria himself having been a violence proponent on opposition in the last election, has taken a sharp twist calling out the vice in Kibra. Kuria has earlier congratulated Mariga on his win.

Congratulations @ImranOkoth for outright victory for you, my friend Ken Okoth and the people of Kibra. Pole sana @MarigaOfficial there is still hope on Sunday during the #MashemejiDerby

In a strategic statement, Kuria who was at one point thought to be positioning himself as a running mate for Ruto before retracting and changing tact by declaring himself a candidate for 2022 presidency, he’s now condemning the violence that was supposedly injected in Kibra.

In 2007, Kikuyus in the Rift Valley would run to the police to escape murderous gangs and the police would kill and rape them. In Kibra on Thursday batallions of goons literally took over as the police watched with glee. The more things change, the more things remain the same

Sharp divisions arose in the concluded by-election in Kibra, a race that became a bed or supremacy battle. While President Uhuru formally endorsed Mariga at a Statehouse function, he never showed any clear words from that point.

While many have pointed out a division in the jubilee camp, things would come out clear when jubilee politicians affiliated to Uhuru like Maina Kamanda, Anne Waiguru, Shebesh amongst others came out to publicly declare support for ODM’s Okoth.

During the campaigns, it was clear that Uhuru’s jubilee camp was supporting Imran Okoth and Mariga was left and singled out as a Ruto’s project, something that the DP affirmed with his spirited campaigns for Mariga.

ODM through their intelligence had stipulated that there was a stiff rigging scheme in favor of Mariga and had put in place a repulsion strategy.