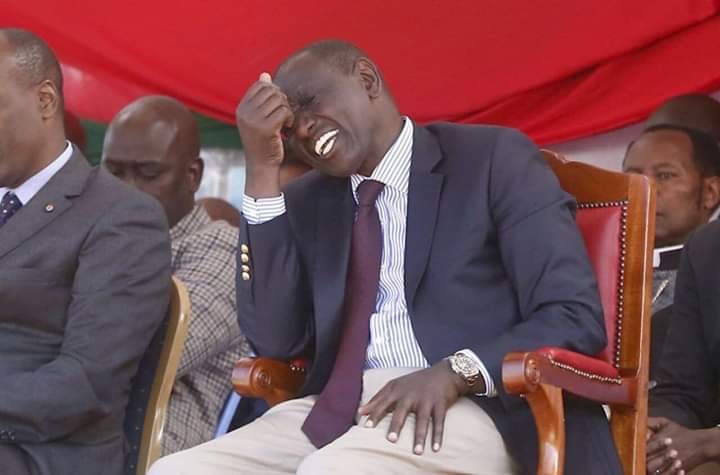 Political elections are not like sex that you get a second round to redeem yourself after pathetic first underperformance. In the run to the Kibra by election, DP who had fronted McDonald Mariga a celebrity figure to counter ODM’s Imran Okoth, he exuded confidence, he promised to teach Raila a lesson.

For Ruto, this was not just any other by election, this wasn’t just a constituency election, it was a national election on a weighing scale, in his head he wanted to weigh his balls against his greatest opponent and certainly the only person his political relevance hangs on, Raila.

During his campaigns that we’re overhyped by sponsored pieces, Ruto made his supporters and public at large that he was going to give Raila the biggest political thrash. You see politics is a game of perception, DP whom at one point had promised to deliver 10 international grade stadiums in Kenya and never delivered a single one was at it again in.

In Kibra, the DP and his project Mariga delivered promises that could only be delivered in a movie through the help of movie director to deliver a perfect fiction.

Word has it that the DP pumped up-to Sh200M into the Mariga campaign, for him, this wasn’t just any other constituency election, he was using it to formally launch his presidential campaigns. Even though he’s been doing it subliminally, the over ambitious DP was determined to blow the lid and bury his only opponent Raila and Kibra couldn’t have presented a better opportunity.

Media reports indicate that he put up a ‘strong’ campaign team which largely compromised of Luhya leaders like Khalwale, Barasa and Washiali this was based on the ethnic composition of the Kibra voters in which Luhyas make 40% and also why Mariga a Luhya was chosen. It was a choice based on ethnicity mentality, well politics is about strategies. In Kibra it was this.

Exuding confidence, the DP in one of his famous addresses during the Kibra campaigns which he held from his Karen home said Mariga would be declared the winner and warned any disruptions to the same saying they’ll know he’s the DP.

In a very twisted campaign strategy, the DP used his Karen home to host perceived supporters from Kibra. They referred to his home as ‘hotel’ they’d go for free food and at the end get paid. For a formal settlement and poor population, this was a jackpot, for them, they’d have a good on their table hustle free, for Ruto, he had a huge crowd for cameras. In essence, this was a fair deal.

Mariga’s campaign team had promised to deliver a win so the DP was generously funding the hot air balloon.

One thing was not right, despite Uhuru being seen on a photo op endorsing Mariga, morning much was coming back from him. Speculations have it that Ruto cleverly sneaked Mariga into statehouse through the backdoor and in a surprise move made Uhuru endorse him as jubilee candidate. After that incident, he never campaigned directly.

Instead what happened? Politicians affiliated to Uhuru like Maina Kamanda, Anne Waiguru openly campaigned for the ODM’s candidate which sent the president’s subliminal message.

Another issue untouched is the battle between IEBC and ODM. According to sources, the DP allegedly had in place an alternative voters register that was calculated to guarantee Mariga a win. This is why ODM constantly challenged the electoral commission to produce the official register. It’s unfortunate that ODM had to move to the court to compel IEBC to avail the register while it should be on a voluntary basis.

Kenya Insights is reliably informed that the NIS had gotten wind of the register games, calls were made directly to Chebukati and the right register was to be used. A rigging strategy was put in place, it had to be called off having been exposed.

Following a thunderous defeat, the Ruto’s camp have reverted to a consolation narrative that violence stopped Mariga’s‘victory’ first it’s important to note that the voter turnout was merely 60%.

Reported incidents of violence was only on Khalwale and Barasa both of whom were alleged to by bribing voters. There’s no fatal case or any case on any common voter reported in Kibra, this clearly shows the motives. In a plain view, this is a case of a kid pinched screaming out loudly as someone shot by a bazooka.

In politics, you’re either a winner, a loser or a philosopher. Ruto’s Jubilee camp have been turned to philosophers.

Facts remain that, Ruto went into Kibra with sole purpose of capturing the seat to embarrass Raila and shit him down(this would’ve done well to his 2022 campaigns). Ruto invested heavily in the campaigns and didn’t get the desired results. Despite the strong face and narratives being pushed around, the DP is a defeated man. Reports have it that he has blocked all the Mariga campaign team from his homes. DP put a great battle, he lost, DP promised to teach Raila a lesson, he ended up being the student.

Is Flying A Drone Really Illegal In Kenya? Netizens React