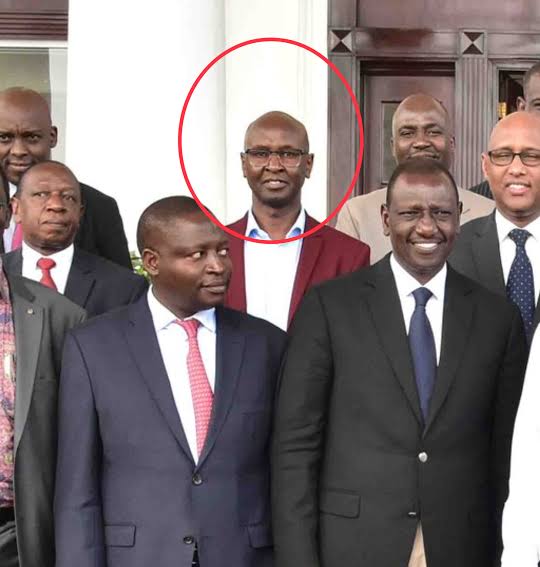 Money laundering is done in the three stages; placement, layering and integration. Through these steps, money from corrupt proceeds is made to appear legitimate and introduced into the mainstream financial system.

I write to you today since due to my interactions with the players in this scheme, I have firsthand verifiable information that money stolen from public coffers in Kenya is finding its way into the mainstream financial system by the help of Petredec.

This is a critical link from the stolen money abroad to the local Kenyan economy. A quid pro quo scheme was setup to mimic legitimate large scale transactions but is just a way of channeling corruption cash from European capitals. The main masterminds in this scheme are Mr. William Ruto (Deputy President, Kenya) and Mr. Giles Fearn (CEO, Petredec). The executors of the scheme are Mr. David Muge (Mr. Ruto’s proxy) and Mr. Mike Abbott (CFO, Petredec)

David Muge is a longtime resident of London from where he has known Giles Fearn. He now uses his immigration status in the UK to perpetrate shocking looting of the Kenyan coffers using his London networks like Petredec. There exists a secretariat based in Upperhilll, Nairobi run by David Muge, in which William Ruto, the Deputy President, undertakes brazen corruption schemes.

All major corrupt kickbacks for William Ruto are signed by Clifton as the commission agent. Investigations currently being undertaken by DCI on Clifton Energy International and are in the mainstream media and public domain include:

David is an asset to William in that he has been based in London and through his international network knows how to launder big money; something which other power brokers in William’s circle do not know. Therefore all mega deals introduced to William are forwarded to David for execution due to his money laundering expertise. Everyone who deals with William Ruto knows this. In Kenya corruption history, David Muge is to William Ruto, what Jimi Wanjigi was to the corrupt clique in the Kibaki regime. 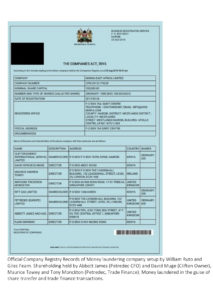 Petredec and Clifton have setup a company in Kenya (Mansa East Africa Ltd) pretending to undertake a gas project in Mombasa. This corrupt partnership has assisted in the transfer of corrupt monies from kickbacks including from bankrupted CMC Di Ravenna of Italy for Itare, Kimwarer and Arrror Dams that Clifton via David Muge secured for William Ruto in Italy.

This money is channeled in fake share purchase/transfer and trade finance schemes legitimizing the corruption money. These monies are laundered via Barclays Bank and others. By pretending to be doing a mega project, these layering of shares and trade finance transactions has enabled corruption money to escape the international money laundering radar. This brazen quid pro quo transaction leaves many unanswered questions:

a) Why is William Ruto supposed to purportedly pay in Europe to buy shares and get trade finance for a company incorporated in Kenya? Why can’t the transactions happen in Kenya?

b) Why does Petredec accept to receive corruption money in exchange for ‘partnership’ and promised control of Kenya’s oil and gas sector?

c) There is no reason why Petredec would partner with William Ruto who has zero expertise in oil and gas other than to perpetuate corruption in this quid pro quo scheme. What value does Petredec get from William other than corruption?

d) Why has the UK Government through MI6 remained silent while money meant for poor Kenyans is blatantly stolen and laundered in broad daylight by Britons? Is this a grand neo-colonialist scheme to take over Kenya’s oil and gas resources?

This international syndicate is for the sole purpose of bringing corruption money into Kenya in batches and will be used for the foreseeable future to clean corruption money stuck in the UK and rest of Europe in time for William’s presidential campaign after which Petredec has been promised total control over Kenya’s oil and gas sector. This is a perfect quid pro quo scheme.

Petredec will pretend to be setting up a new terminal in readiness for Kenya oil exports to boost their profile while William Ruto will bring in corrupt money stuck abroad in readiness for his total destruction of the President Uhuru Kenyatta Anti-corruption machinery. This is garden variety collusion between a greedy capitalist British company and a corrupt African leader to use stolen funds to destroy Kenyan institutions on one hand and deliver astronomical profits to the greedy neo-colonialists on the other hand. With this billion dollar corrupt setup, the security of the President is at great risk from the oil and gas mafia.

These international masterminds of corruption are looking for the quickest overnight route to power for William to immediately take over as Commander in Chief. Petredec should refund to Kenyans all money from public coffers that they have helped William Ruto to launder. 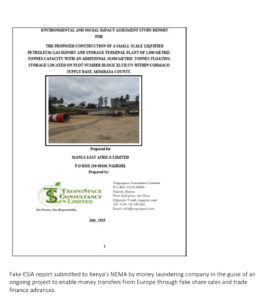 Fake ESIA report submitted to Kenya’s NEMA by money laundering company in the guise of an ongoing project to enable money transfers from Europe through fake share sales and trade finance advances.

House of Thugs: Most Sitting MPs Are Battling Criminal Cases In Kenya