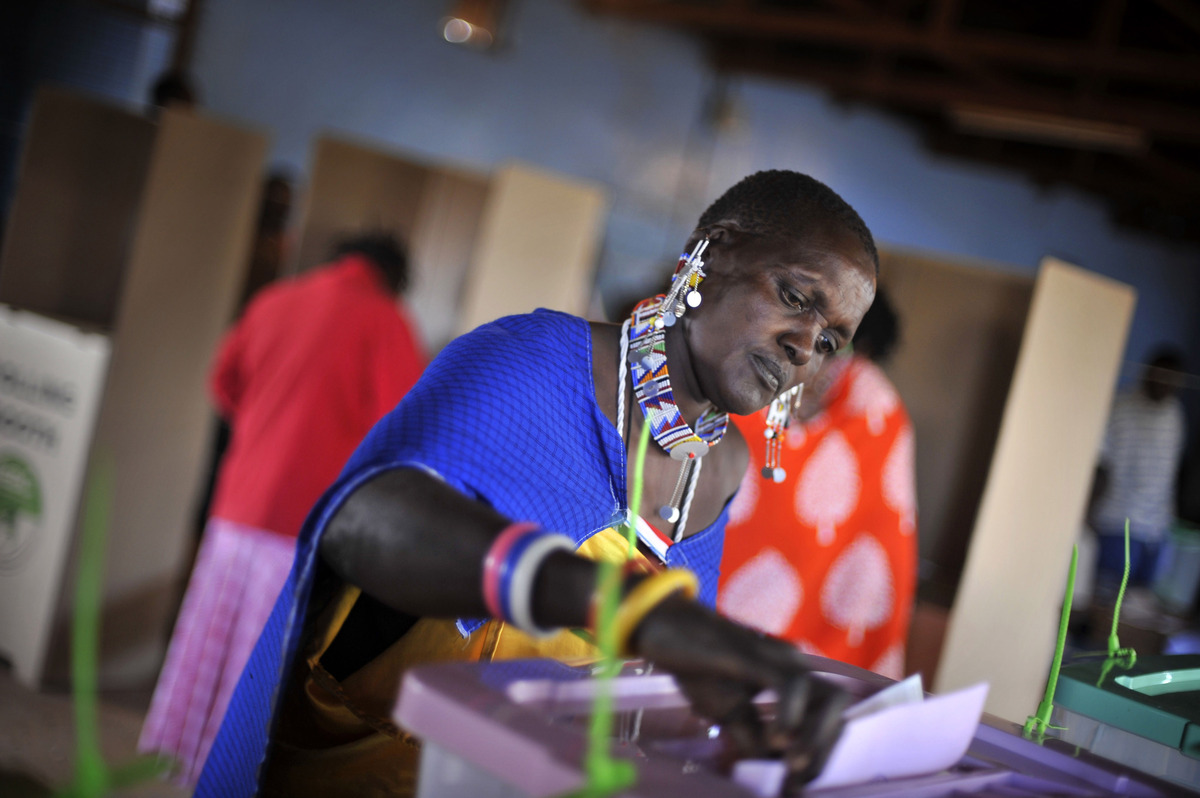 A woman casts her vote in the last botched election

As a country, we’re facing an inevitable constitutional crisis that everyone knows about including the Attorney General Githu Muigai or the Mortician but refusing to admit. The more things change, the more they remain the same. It is within my own view after careful observation that this election has been fixed with the same players who were enjoined with IEBC an identical twin of Jubilee and the Western Countries who openly showed their side but now instead playing it low in the public gallery but doing serious shadow job to ensure their man gets the whole cow so they can continue feasting.

Kenya to me has been mortgaged to the biggest bidders and democracy is just but a word in the dictionary. If you look at countries like Zimbabwe, Uganda, Burundi, Rwanda, Congo et al where democracy or a call for it attracts death sentence, the autocrats enjoy cordial relationships with the Western world, what then does this mean to Kenya? While the US is condemning Museveni for crushing opponents on the scrapping of age limits to give him lifetime chance of presidency but still, on the other hand, maintaining financial aid to the country? It is nothing personal but just business. And U.S. is not the only country fighting for their interests in Africa and beyond. Kenya has no one but themselves to help them from themselves.

Thanks to the evil mind manipulation by the loathed and beer described as a criminal outfit Cambridge Analytica’s hatred marketing that had left the country divided than ever before. They found a polarized country divided along tribal lines and made their work easier and heavenly. With 26th Octobter the date set by IEBC for the fresh elections fast approaching it is even appearing clearer to me that we won’t have an election after all. The reason is simple, as a key stakeholder in the election, NASA gave what they called irreducible minimums to participate in the election which basically aims at reforming the IEBC to conduct the fresh election within the conformity of the constitution and with the highest integrity standards.

While NASA has been on an extensive campaign to have an election beyond reproach, Jubilee whose dissenting judge alluded to the court on the annulment verdict that the integrity standards set were too high for IEBC, are living in their own world. What did Njoki mean by that statement? A full judge insinuating that mediocrity in the electoral process is not criminal that a small space for manipulation should be lost? We will revisit this story some other day.

While the court made a clear decision that IEBC was guilty of mishandling the election by flouting the law and was specific that Uhuru was free of blame, Jubilee in their strategies decided to shift the focus from the main culprit to side shows so Kenyans couldn’t keep tabs on what matters most. You’ve heard of gimmicks of votes counting, this is hilarious, a dwarfing thought feasible to their support base, they’ve become biggest targets of fake news and convenient propaganda. 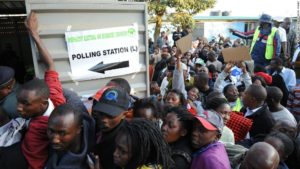 Kenyans pushing and squeezing themselves in the line during voting exercise held in August.

Why would Jubilee front for a recount yet the court didn’t challenge the numbers? Why can’t Jubilee be furious at IEBC officials why by the way are under investigation by the office of Public Prosecutions instead taking gullible Kenyans in rounds with fabricated accusations on the judiciary. Dumbest being that of the Chief Registrar of Supreme Court, it beats me off how men with functioning brains can buy the lie that the registrar planted fake 4,000 forms to mislead the judges yet during the scrutiny all party agents were present. Uhuru, Raila, IEBC were all present. IEBC submitted the forms and if there was any fake form then the person to turn eyes on is IEBC but since Jubilee has perfected the set of lying, they don’t want you to think beyond their well laid out propaganda scheme. None of the respondents objected to the registrar report tabled, fake forms lie is an afterthought to fit in the judiciary onslaught script.

There’s a harsh reality that awaits Kenyans on the 27th of October, many can see it but we’re giving it an ostrich treatment when the clouds gather and get darker when it storms, it’s definitely gonna rain. You may agree it disagrees but while I still have space, I’ll tell you what I think straight up.

Uhuru and team want to install a dictatorship in Kenya. The country is divided between those who want to live under an autocracy and those who will not. The mission of Jubilee is to install an authoritarian government. Their refusal to leave office is aimed at establishing an illegitimate change of government. Jubilee is holding IEBC hostage to conduct another sham election to legitimise a sham government. Any election which does not meet the standards set in the Constitution of Kenya is illegitimate. Anything they do without NASA is their sham election. Let them proceed and do so. Through the sham election, they will have gone against the Constitution and seceded from the Republic of Kenya.

NASA has the option to make the elections undoable. Jubilee is trying to move us away from the fact they stole our election by sideshows. Election Thieves and Those who Abetted the Theft had one plan. To create a dictatorship. So they are not planning an election on 26th. They are planning a semblance of an election that will give them a shred of legitimacy to swear in Uhuru by force. They are not interested in an election that conforms to the constitution. Our biggest weapon is to trash trivialize and delegitimise any attempts at organizing an election that it will stop them from having one. Don’t get it twisted, the West is fully onboard with Jubilee.

If you want to have a sneak peek on what a dictatorship looks like, zoom no further than our neighbor Uganda to see how Museveni is grinding to powder anyone opposing him. Embakassi East Mp Babu Owino is behind bars for a laughable charge and in that lemme borrow a transcript from the court. James Orengo Defending Babu In Court:

“My client here Babu Owino has been charged with creating disaffection against the presidency.

My Lords, there is nobody in Kenya called the presidency.

The presidency is so amorphous that it includes clerks, the Deputy President, the chiefs and many others working in the presidency.

Related Content:  Raila's Good Days are Behind Him, The Luo Nation Should Focus On His Successor

My Lords, who is this person called the presidency that Babu was causing disaffection against?”

It is within my capacity to alert you to what is at stake. Our very freedom is at stake. Our constitution is at stake. This is Uhurus civilian coup attempt of I’m to borrow his own words on the judiciary. We must not die on our knees but must resist and fight it. The sooner our people understand that the 26th election is a sham and a joke and there is no intention of having an election that conforms to the constitution of Kenya then everyone will get why the 26th is a death trap we cannot afford to get into. They’ve not shied away from swearing to change the judiciary and give the Presidency godly status. 26th is the day the Constitution is overthrown.

With days flipping, it is becoming lucid to me that we have an incumbent who’s not willing to leave power and opposition leader who has decided not to exit the stage without leaving a mark, not necessarily the end game but Raila is on record saying this will be the last election to be stolen in Kenya, here we have someone ready to give it all up but set a precedence. Combine these two people and you’ll realize business will not be as usual at least not anytime soon. And to be fair, running an election wurg the same IEBC structures that bungled the last election and expecting different results is more of trusting your goat with the hyena, leaving them together and expecting to come back to a live goat, erroneous. Having elections as rituals must cease. Kenya has the last chance to make it break it. Prices to pay for freedom are expensive. Everyone has the chance to sit on which side of history they’ll be remembered with, pro anarchy or pro democracy. Period!

The Implications Of Raila Odinga’s Withdrawal From Election and Why There Will Be No Election On The 26th.