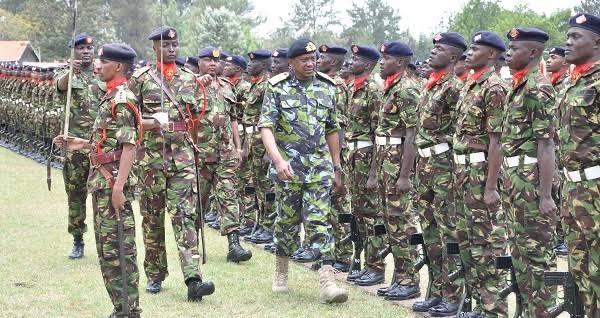 The public service has been associated more with graft, ineptitude and impunity. Civil servants are considered to pursue personal aggrandisement to the detriment of the public good. Soldiers espouse a public image of discipline and purpose. The strict and clear hierarchy of leadership ensures fidelity to authority, obedience to command and respect for rank.

Here are some of the Public agendas that millitary have transformed in a twinkle of an eye after being given opportunity:

Recently The Kenya Meat Commission cleared the bulk of debts it owed livestock farmers and other suppliers since it was taken over by the military in September.

They’ve managed to clear Ksh.250 million debt owed to livestock farmers. A further Kshs. 150M has been allocated to clear debts to other general suppliers in this financial year.

“We have lost opportunities to develop KMC under the frameworks we had. We kept sinking money in billions. It is because of incompetence, poor management and corruption that the parastatal could not move. I believe what we want is results. We need to focus on results and not processes,” Super CS Dr. Matiangi said.

He also said that the management  handover of the loss-making parastatal to the  the Kenya Defence Forces had also led to a nearly 30 per cent increase in the number of livestock supplied to the Athi River-based meat processor.

NMS was put into office on March 18, 2020, by the President nearly a month after Nairobi Governor Mike Sonko handed transferred four key functions to the National Government.

The transferred functions include county health services, transport, public works, utilities and ancillary services and county. Most importantly is the fact that head of NMS is Millitary Major General Badi.

Formation of NMS and transition of powers to it was a  move which was legally challanged in the Justice system and caused stir concerning its ‘illegality’ but its formation just proved those who caused turmoil wrong and proved right those who trusted in it because the service delivery has been tremendous under the millitary man’s watch.

The decision went against the spirit of the 2010 Kenyan Constitution, which established county governments to promote democratic accountability by devolving some powers to the local level. 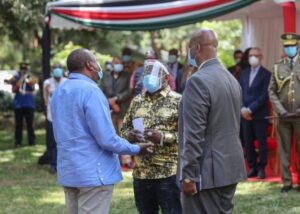 President Uhuru in conversation with NMS head Badi and Nairobi Governor Sonko in a bid to mediate the two.

Up-to-date the NMS has achieved much more than what Governor Sonko’s administration achieved in 3 years in office. A fact which has cost a rift between the flamboyant PR Governor and NMS head Badi as he(Governor) feels that NMS is overshining and overshadowing him and as sensational dancehall singers Tarrus Riley and Sheensea said in this hit song “Lighter” – Baby Sonko when your bright light starts to fade, fire up your lighter – your development lighter not rift and hatred lighter.

The team has elevated 35 tanks, completed 20,903 meters of extension piping as well as the daily distribution of 200,000 litres of water to informal settlements using water bowsers.

NMS was also tasked to work with NAMATA to implement Nairobi urban mobility plan, come up with pedestrian walkways, dedicated cycling and pedestrian lanes on Wabera Street, Kenyatta Avenue and Muindi Mbingu Street within 100 days. Of which they completed and have tranformed Nairobi City CBD look like a walk in the park.

President Uhuru Kenyatta on Tuesday, 17 Nov 2020 launched the revamped Nairobi Commuter Rail Service (NCRS) and the refurbished Diesel Multiple Units (DMUs). The system consists of new 11 DMUs and Commuter Rail Buses. The project is part of the Nairobi Metropolitan Transport Master Plan that is aimed at carrying out a modernisation and expansion of underutilised railway transport to reduce congestion on city roads.

NMS aims by 1st Dec to eradicate PSV congestion in cbd by constructing new bus stations away from the cbd to shine more light to the capital city.

Major General (Rtd) Gordon Kihalangwa was promoted as Principal Secretary, State Department of Immigration, when it had wrangles. He is now Public Works PS, a department that is a key delivery pillar of the Big Four agenda and all is well now.

President Kenyatta has gone further to place all government airplanes and helicopters hitherto outside the KDF under military management of the elite Kenya Air Force. These include the Police Air Wing, Kenya Forestry Services, Kenya Wildlife Services and the Kenya Pipeline Company. This move is believed to had been made after misuse of these assets by Police bosses whom turned government choppers to family means of transport, frequent air accidents which have led to loss of billions of taxpayers money. Under millitary watch, non of the incidents have been reported and everything seems to be under protection and control.

With Millitary- I believe there wont be 2nd Covid19 millionaire wave. If not millitary , then re-allocation of the BBI refurendum funds will be to the same monkeys from different forest, of which wont be any better than 1st wave of covidmillionaires looting spree.

Sugarcoating the Corrupt Civilian rule marinated with corruption and thuggery and yelling at the Millitary rule will be like preaching water and taking wine.

Civilian rule in some Public service dockets have proven time and again waste of public resources hence the exlusion of civilians and inclusion of millitary to reclaim the lost glory and of which have truly responded positively.

The influence of power might lead to clinging into these civilian positions by the millitary of which might cause call for an alarm as it might result to full transformation to colonial era millitary state.

But with Civilian rule continuing to be deep rooted in graft, the warmth service of the military rule is starting to be felt as common wananchi need service and getting true value of their tax in return.

Kenya Insights allows guest blogging, if you want to be published on Kenya’s most authoritative and accurate blog, have an expose, news TIPS, story angles, human interest stories, drop us an email on t[email protected] or via Telegram
Related Topics:
Up Next