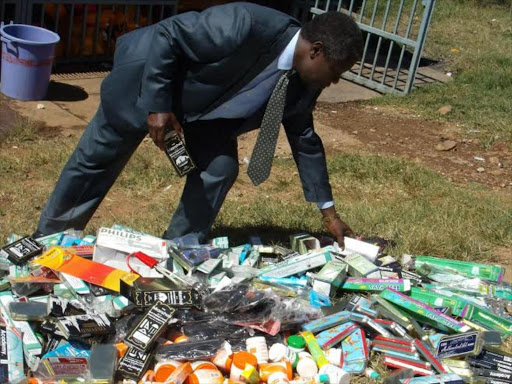 Countries across the globe including Kenya are grappling with efforts to stem the counterfeiting menace which has seen a myriad of fake products flooding the markets.

Kenya for instance has heightened it’s efforts through creation of authorities whose sole responsibility is to curb the vice and bar it’s negative impacts on consumers and the country’s GDP.

Findings by various researchers show that the scale of counterfeiting and piracy is large across the globe and it’s expected to grow.

A report compiled by Frontier for International Trademark Association (INTA) and ICC estimated that the value of international and domestic trade in counterfeit and pirated goods in 2013 was $710 -$ 917 Billion. In addition to this, the global value of digital piracy in movies, music and software alone in 2015 was $213 Billion.

The figures also translated to wider economic costs associated with the effects of counterfeiting and piracy on the displacement of legitimate economic activity.

These estimates also provide a starting point for inferring fiscal losses regarding the impacts of counterfeiting and piracy on Foreign Direct Investment (FDI) and crime.

This means that counterfeiting has significant effects in the job market where it displaces legitimate economic activity. For instance in 2013 about 2.6 million job losses was as a result of the crime with the figure still projected to hit between 4.2 to 5.4 million by 2022.

The researchers applied econometric model which further estimated impacts of changes in the intensity of counterfeiting and piracy on economic growth which was worth between $30 Billion to $54 Billion in 2017 for the 35 OECD countries also still stands to rise.

The report also projects that the value of trade in counterfeit and pirated goods could be as high as $991 Billion by 2022.

This is because any market with serious influx of counterfeit goods will support the wider black market, will experience lost genuine employment, discouraged innovation, lost foreign investment and lost tax revenue and reduced economic activities.

And the perpetrators behind this vice have also continued to up their game by faking genuine products as authorities and innovators struggle to curb the menace.

In Kenya alone, the Anti-Counterfeit Authority estimates that one in every four products sold in local markets is fake and more than four million Kenyans are using counterfeit products.

Beyond the borders, the Anti-Counterfeiting Group (ACG) which has been fighting the menace for over 40 years had intended for 2020 to be a year of great celebration for it’s members but was interrupted by the arrival of Covid-19 pandemic which resulted to far more unimaginable loss, illness and heartache.

Counterfeiting criminals and perpetrators of other forms of illicit trade sought nothing but profit from the dangers and disasters that the entire globe faced.

This resulted to one of the world’s faceless menaces throughout the terrible period, and spread to become a criminal contagion.

Nevertheless organizations including Kenya National Chamber of Commerce and Industry (KNCCI), Kenya Association of Manufacturers (KAM) and Kenya Private Sector Alliance (KEPSA) have continued to voice their concerns against counterfeiting and piracy which are eating into effective and profitable trading for businesses in Kenya.

Related Content:  Why Farmers Are Shunning Doing Business With NCPB Despite Price Increase

KNCCI in recognition to efforts by Kenya Bureau of Standards (KEBS) which is branding products with a standard check mark is re-affirming it’s commitment to enhance consumer health, protection, safety and economic interest by enforcing article 46(c) of the Kenyan laws.

Kenya Insights allows guest blogging, if you want to be published on Kenya’s most authoritative and accurate blog, have an expose, news TIPS, story angles, human interest stories, drop us an email on tips.kenyainsights@gmail.com or via Telegram
Related Topics:Anti-Counterfeits Authoritycounterfeit goodsKNCCI
Up Next