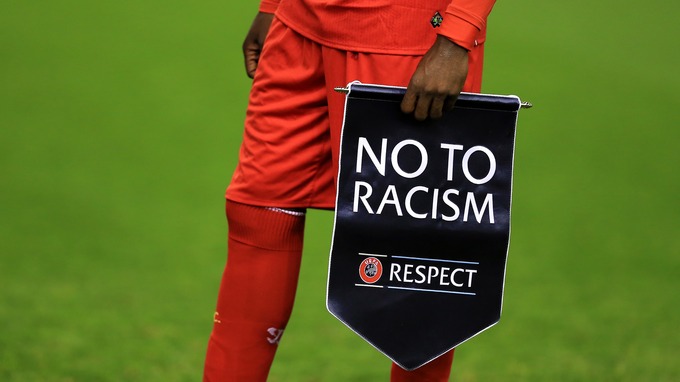 Racism in football has been taken a notch higher and this time around it’s not in Germany where it’s prone. Italy fans have decided to let the racism ego take over and control their football feelings and reactions.

Romelu Lukaku, 26, stood and stared at Cagliari fans behind the goal – where the chants had come from – after scoring.

This is what Inter manager Antonio Conte had to say said after the game:

“I really didn’t hear anything from the bench. However, it is true that in general in Italy more education is needed. I have also heard [Laziager] (Carlo) Ancelotti complain about the constant insults received on certain pitches. When you are abroad there is more respect, the fans think only of supporting their team.”

The Italian league’s disciplinary panel later decided not to take action against the club. Lukaku – who joined Inter Milan from Manchester United this summer for £73m – is the latest in a series of high-profile players to be targeted this season.

This is coming at a time when Chelsea defender Kurt Zouma was also subjected to racist abuse on Twitter after his own goal in Saturday’s 2-2 draw with Sheffield United over the weekend.

Related Content:  Eliud Kipchoge Jets Back In The Country From Vienna

A number of Premier League and English Football League (EFL) players have had racist comments directed at them online since the 2019/20 campaign began, including Manchester United’s Paul Pogba and Marcus Rashford and Derby County’s Duane Holmes.

Reading midfielder Yakou Meite was also subjected to racial abuse after he missed a 91st-minute penalty in a 3-0 win over Cardiff in the Championship on Sunday.

Chelsea striker Tammy Abraham vowed to “silence the haters” after being targeted online after missing a penalty against Liverpool in the UEFA Super Cup final last Wednesday in Istanbul, Turkey.

England women’s coach Phil Neville called for a six-month social media boycott by footballers in response to a rise in online racist abuse of players.

“I’ve lost total faith in whoever runs these social media departments, so I just wonder whether now as a football community, in terms of really sending a powerful message, is: come off social media,” he said.

“Six months – let’s come off social media. Let’s see the effect that it has on these social media companies, whether they’re really going to do something about it.” added

“The latest round of fixtures have again seen unwarranted and vile racist abuse sent to players. The number of posts such as these since the start of the season further highlights how discriminatory abuse online is out of control. Without immediate and the strongest possible action, these cowardly acts will continue to grow.”

Kenya Insights allows guest blogging, if you want to be published on Kenya’s most authoritative and accurate blog, have an expose, news, story angles, human interest stories, drop us an email on tips.kenyainsights@gmail.com or via Telegram
Related Topics:ItalyRacismRomelu Lukaku
Up Next

Why The Government Has Stopped Hiring For Three Years