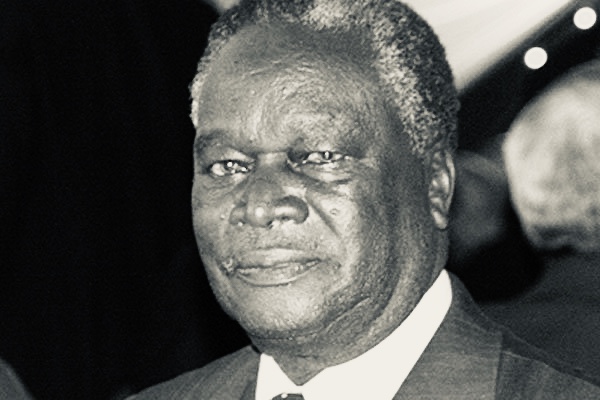 It was actually courtesy of Kwendo Opanga (accompanying image), that Kipyator Nicholas Kiprono arap Biwott (K.N.K. Biwott), got his nickname “Total Man.” Kwendo Opanga then worked at the Nation Media Group, and had a popular well followed column in the “Sunday Nation” known as the “The week that was.” Then Kenyan President Daniel T. arap Moi abruptly disbanded the Ouko Commission of Inquiry midway in November 1991, and immediately thereafter “Karnet” i.e. “metal” i.e. Biwott, and then Permanent Secretary in the Office of the President in charge of Internal Security Hezekiah Oyugi Ogango, were arrested in connection with the murder in February 1990 of Kenya’s then Foreign Affairs Minister Dr. Robert John Ouko. Biwott was relieved of his position as Energy Minister, and Oyugi Ogango was transferred to General Motors Kenya as Chairman.

Sometime in either late November 1991 or early December 1991, after their release from two week custody, Biwott attended a Church Service in his Keiyo constituency. Biwott was eager to make a point i.e. that he was still a powerful man not to be messed around, and declared in his Keiyo mother tongue as follows i.e. a direct translation to English i.e. “I am a man, a man, a Total Man, a man is a man. I will die a man in this country.”

Kwendo Opanga thereafter, in his “Sunday Nation” column “The week that was,” carried Biwott’s declaration in full, describing it as a warning. Opanga’s article went “viral” by the standards of those days, resulting in Biwott acquiring the nickname “Total Man” which survives to this day. The power of media indeed. So yes, it was none other than Kwendo Opanga who gave Biwott his nickname “Total Man” though Opanga himself does not even remember this i.e. this writer brought it to Opanga’s attention about three years ago and Opanga just laughed and said that he couldn’t remember. It must be the numerous articles he has written over the years. 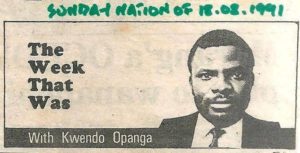 On a related note, it is mentioned above that Biwott and Oyugi Ogango were put in police custody for two weeks, and this is courtesy of Nicholas Biwott himself i.e. in February 1988, Biwott fronted a Bill which passed into law in the 5th Parliament, increasing the duration that one could be held in police custody without being presented to a court of law with an accompanying charge sheet, from 24 hours to two weeks. There you have it i.e. Biwott frying in his own fat regarding his two week stay in police custody.

Related Content:  Safari Rally Called Off Due To Coronavirus

Another example. Andrew Kisa Saikwa was the Commissioner of Prisons in Kenya in the 1980s. Saikwa abolished sugar in the breakfast porridge served to prison inmates, declaring that “Prisons were not Hotels.”

Saikwa fell foul of the law, was sacked, was tried, was found guilty and was imprisoned. In his first few days in prison, Saikwa lamented that the morning porridge “had no sugar” and was tasteless. He was politely reminded that it was he who had abolished sugar in morning porridge for prison inmates. Saikwa was however lucky in the sense that many senior employees in the Kenya Prison Service, including catering staff in the Kenya Prison kitchens, owed their position and jobs to Saikwa, so exceptions were regularly made for Saikwa i.e. he regularly got porridge with sugar, and also regularly got generous pieces of meat with his meals i.e. some of Saikwa’s past actions, now came and acted in his favour and survival.

Our utterances and actions follow us in this life, don’t they?

A Rare Photo Of The Kenyatta Family