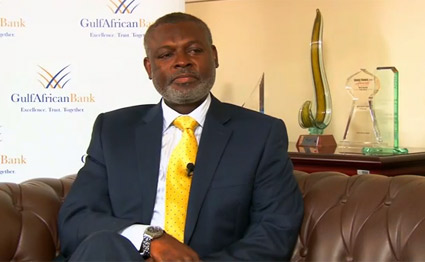 In March 2009, SAX Limited had sought a loan from Gulf Bank to buy two aircrafts and related equipment. Mohamud Sheikh Hussein offered his property L.R No. Eastleigh 36/11/1 as the guarantor. By then, his property was worth Sh160M and has since gone up. For him it was just another of many bank engagements but unknown to him, it would end up in a decade long fight to regain full control of his suit property.

In April, 2009, Gulf Bank after reviewing the securities, agreed to advance a Murabaha Asset Finance Facility To SAC Ltd as the borrower Sh95M. This amount would be used in purchasing a used Aircraft Beechcraft Baron 95-E55,5Y-BPC at a cost of Sh11,200,000. A 5 tonne, Sideley HS478 Aircraft From Track Mark Ltd at Sh80M and Sh2.9M to purchase propellers.

The Sh160M property of Mohamud was to guarantee for Sh120M with SAC directors guaranteeing Sh94M but the registration was to remain jointly in the name of the bank and the company SAC. The terms for this MURABAHA facility was that profit and not interest would be charged at 16.5% of the facility.

That was a deal sealed and so Mohamud thought his work was finished. Things started making twists on 4th May barely weeks after SAC was advanced the principal amount of Sh95M. Gulf issued SAC with a second letter of offer varying the terms of the MURABAHA facility and this would translate into review of security terms for the mortgage. In a offer letter dated 4th May 2008, now the security property as the first ranking had a legal charge of  Sh95M, Mohamud switched to guarantee Sh95M.

In a letter of offer dated 4th November 2009 and seen by Kenya Insights, a second Murabaha stock finance was advanced to SAC the borrower for the sum of Sh15M. This amount was over and above the sums secured by the initial mortgage dated 9th September according to court papers.

Now here’s the point Fraud started playing, this second facility of Sh15M was given by the bank to SAC using Mohamud’s knowledge and consent as the guarantor and so the Murabaha facility wasn’t secured by the initial mortgage according to a court of appeal ruling on this case.

Gulf representatives liaised with SAC, reviewed the terms of mortgage while using the guarantor’s property, went ahead and issued another facility of Sh15M without his consent just to make the open breach clearer. The varied terms of repayment of the loan facility were of no effect and as a result, Mohamud was discharged from his obligation. Gulf unlawfully accommodated SAC the borrower and varied his terms of payment.

Having been fully discharged by the bank as a guarantor, there was no way in law the bank would reviver any amount on the second facility from Mohamud but from SAC the principal borrower. To affirm this in a demand letter dated 26th April 2010, in admission to this fact, wrote to SAC seeking the payment of the second facility. Mohamud wasn’t copied since he had been fully discharged by the bank as the guarantor on the principal amount.

In June 24th 2010 according to court documents, Gulf confirmed that SAC had fully settled the Murabaha loan facility which was done by the insurers on payment of the insurance of $370,000.

It didn’t end there, SAC(borrower) went ahead and sought a third facility(Tawarraq Working Capital Finance) Of Sh58,672,978 which was to be repayable in 24 months. Once again, Mohamud’s Eastleigh property without his knowledge and consent, was used to guarantee this third and illegal loan facility which wasn’t registered against his property according to court papers.

SAC the principal borrower defaulted in the payment of the third facility and Gulf sent him a demand letter dated 19th November 2010 seeking the settlement of arrears of Sh4,174,525.31. This letter wasn’t copied to Mohamud in tacit admission by the bank that Mohamud wasn’t liable as the guarantor.

Despite of all the accusations of playing dirty, the bank insisted that Mohamud was aware of the variations and approved them contradicting their body language. They never engaged him at any point after inking the initial mortgage facility.

In a sharp twist by a letter dated 26th January 2011, a firm Mohamed Muigai Advocates purported to issue a three months statutory notice on behalf of the bank seeking payment of Sh67,078,541.08. Here’s where the real games started playing.

Despite all the breaches of all standard banking precepts, Gulf Bank purported to restructure the loan facility to make Mohamud who was the guarantor to make him the principal borrower. This, Mohamud says in court letters that it was illegal,l and vitiated by Fraud, duress and coercion so as to constitute an unconscionable bargain in law.

In play, the security documentation and letters were all drafted by the Gulf’s legal department and Mohamud wasn’t allowed the privilege of independent legal advice on the implications of signing the letter of offer dated 26th May 2011 in what he says the bank unlawfully coerced and duped him by purporting to restructure the loan facility and waive its exercise of statutory power of sale while in law, the bank didn’t have any statutory power of sale.

It doesn’t make sense that the bank purportedly made Mohamud the principal borrower yet there wasn’t consideration for the diminishing Musharaka sale and lease back Finance facility and not a single cent has been disbursed to Mohamud.

Worth noting that the bank had initially discharged Mohamud as the guarantor when it rescheduled the facilities in favore of SAC the principal borrower. For a fact, Gulf Bank has forwarded Mohamud a re-conveyance Of mortgage confirming that all the money secured under the mortgage of Sh95M the principal amount that is the only one he approved to had been fully paid. 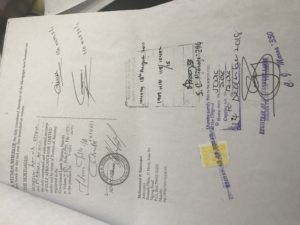 Reconveyance of mortgage forwarded by the bank to Mohamud clearing him.

Amina Bashir, the Then Bank’ Company Secretary and Head of Legal Department is a key person of interest in this ploy. According to court documents seen by Kenya Insights, Amina drew agreements dated 26th May 2011 and purchase agreement dated 30th June 2011 in which she made Mohamud liable for payment of Sh68,455,295.08. In this reversal of roles, Amina purported to make Mohamud the principal borrower (SAC) now the guarantor to Mohamud when in fact no facility was advanced to him.

The Sh68.4M that now the bank was putting on Mohamud, Musharak Asset Purchase Agreement that Mohamud alleges he was duped and coarced into signing is described as a clear fraud on his side to enable the bank sale his property. Simple question that the bank need to answer is if Mohamud was a principal borrower as they purport then where’s the proof that he was paid? None as it never happened.

September 4th 2012, SAC the principal borrower in admission through a letter, confirmed it owed the bank the Sh68,455,295.08 that the bank purported to have been borrowed by Mohamud in their reversal roles theatrics. This debt according to court documents is fictitious and fraud that can’t be basis of any valid statutory notice.

In arguing their case to hold the statutory notice, Gulf Bank lies to the Court of Appeal by not disclosing that they had registered a re-conveyance of mortgage dated 8th August 2011 on 18th 2011 and there wasn’t mortgage in force.

The Chief Land Registrar confirmed that the last entry on the file was the re-conveyance of mortgage confirming that the property is fully and legally under Mohamud and held no debt, keep in mind the bank has cleared him of the loan. 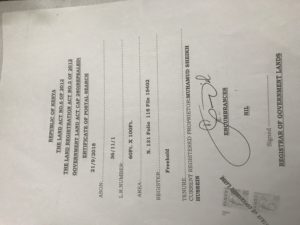 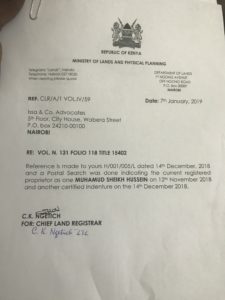 With everything working against them and all factors exposing this clear fraud, Gulf Bank has served Mohamud with a notice of sale by public auction by Garam Investments on 17th Dec in respect of his Eastleigh property that he used to guarantee a loan and which the bank had cleared him of. The property would be auctioned on 19th February 2019 despite there being no mortgage registered against the property, non whatsoever

Following the sustained efforts to illegally acquire and sell his property, Mohamud has since published a Caveat Emptor Buyer Beware on local dailies warning the public against being duped into the purported public auctioning of his Eastleigh property.

At Kenya Insights, we’re just opening a case which we believe if it’s the norm, then there could be many  frustrated customers like Mohamud. We’re asking members of public who might have fallen prey to such mannerisms of coercion and duping to write to us with solid proof on either Gulf Bank or any financial institution, we will highlight. Our email is below this post.

As for Gulf Bank, we’ve picked this case and will be going into much deeper details in subsequent series, how a bank turned against a guarantor is a reason to worry many other potential or existing guarantors to their facilities. What does the bank know that Mohamud or the courts doesn’t know? Why is the bank withholding Mohamud’s land documents despite having cleared him of any debt? Why did Amina Bashir change the loans agreements along the way without consent of the guarantor? What’s the level of BODs involvement in this scheme? Series continues…