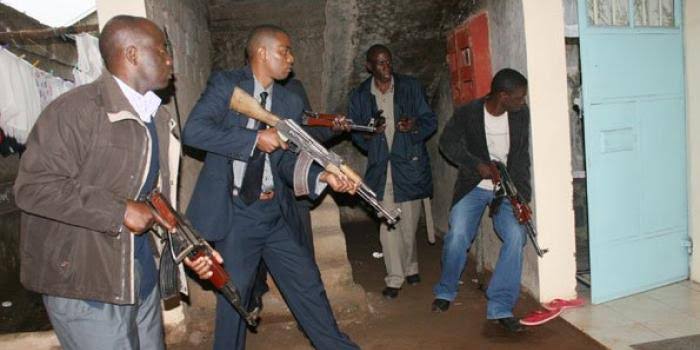 Flying Squad officers have arrested one police officer & are in pursuit of others following a report made by one Bathily Abdoulaye, a Mali national, who had reported that on 15/09/2018 four police officers from Nrb Area command came to his Kilimani residence and arrested him.

The complainant was then escorted to Central Police Station where he was later released without being officially booked in the Occurrence Book. Thereafter, the same officers still continued demanding from him an additional 8,000 US Dollars which prompted him to report the DCI.

Flying Squad  officers laid an ambush at Yaya center where the money was supposed to be delivered & in the process managed to arrest one suspect namely Moses Njogu Njagi who led officers to Central Police Station where No.88724 PC Kelvin Ndosi of DCI Central was arrested.

The passport of the complainant was recovered from the arrested officer. The Flying Squad is still looking for the other rogue officers including one driver attached to the County Criminal Investigations Officer,Nairobi Area.

Cases Of Police Officers engaging in criminal acts are not new in the city and this just adding to the pile of many cases. With the purge on illegal immigrants, rogue officers have taken advantage and many foreigners are complaining about harassment.

Related Content:  Murder: What Does Safaricom CEO Bob Collymore Know Pertaining The Mysterious Deaths At Safaricom?
Kenya Insights allows guest blogging, if you want to be published on Kenya’s most authoritative and accurate blog, have an expose, news TIPS, story angles, human interest stories, drop us an email on [email protected] or via Telegram
Related Topics:
Up Next