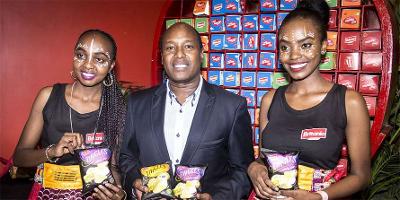 Britania Foods CEO sampling out some of the company’s products.

Mr Robert Kagundah, a former Coca Cola executive, was appointed to take charge of the business now renamed Britania Foods Ltd after acquisition from Manji foods by Catalyst Principal Partners and for Manji Foods, previously House of Manji, is Kenya’s market leader in the biscuits category with a market share of 27 per cent in 2016, according to data from research firm Euromonitor, it was a good gamble for the investors, however, that hasn’t been the case.

Britania has been making losses and notice to the CEO to restructure the company to profitable heights has hit a dead end with steady losses that now rolls.

Britania Foods Limited workers have accused the top management of irregularly running the company that was in 2017 acquired by Nairobi-based private equity firm Catalyst Principal Partners.

All is not well at Britannia Foods Limited following allegations that workers have been turned into slaves with sexual exploits being at the centre of management.

Currently in hands of private equity firm, Catalyst Principal Partners, all eyes are on chief executive, Robert Kagundah popularly known as RK on whom all eyes are focused. Not left out is Elijah Maina, the sales director of the firm. The duo is alleged that in order to satisfy their social urge, they award contracts and employment opportunities to females they befriend.

Kagundah out of the blue, awarded a catering and cake supply contract to Civa Cakes, associated to Cynthia Orenge. The said Orenge has introduced a lady by the name Charity Muema to Maina and her firm CM commodity suppliers is to land a major wheat supply deal running into millions of shillings.

Kagundah met Ms Orenge at Karen Country Club. She was sacked at the club after she was found in a compromising position inside Kagundah’s car at the parking.

At Britannia, Kagundah manipulated a Somali tycoon, a one Mohammed and acquired a Mercedes Benz registration number KCD 227B. Mohammed had supplied the company with a number of Toyota Fielder cars for the sales department.

Britania is fully owned by Catalyst Principal Partners after being purchased in early 2017 from the Dawda family. Our sources indicate that cooked books may have been used to dupe Catalyst into buying the loss-making company.

By the time Catalyst found out, it was too late. CEO Robert Kagundah and his sales manager, happen to be best friends, forming an axis of acute corruption that no one at the company can stand up to.

The plan involves working in cahoots with distributors, to dupe the board and management that they are meeting sales targets.

A distributor would for example order biscuits worth Ksh 10 million, and Elijah and his team would report that figure has been met, regardless of whether the distributor sells or not. The distributor would then return back the stock after about three months, very close to the expiry date.

Britania hence ends up losing tens of millions every quarter, and rumors are that Kagundah is paid handsome amounts in kickbacks together with Sales Director Elijah Maina.

Catalyst has since sacked the sales director over non performance and the steady loss making. This can be seen as a blow to the CEO who has now lost s confidant. Britania would be keen to get its brand on straight line by doing away with scandalous characters in its management and more so have performers as opposed to mediocres.

Related Content:  Covid-19 Vaccine: Ministry yet to receive official procurement papers
Kenya Insights allows guest blogging, if you want to be published on Kenya’s most authoritative and accurate blog, have an expose, news TIPS, story angles, human interest stories, drop us an email on [email protected] or via Telegram
Related Topics:
Up Next

How Flying Squad Trailed And Arrested Police Officers Who Raided A Malian Citizen’s Home In Kilimani Stealing USD 8,000 In Cash