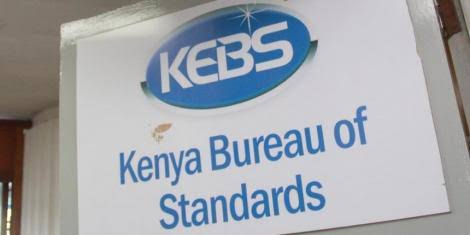 In December 2018 the Director of Public Prosecutions (DPP) prosecuted the directors of Madras Security Printers Private Ltd over conspiracy with Kenya Bureau of Standards (Kebs) officials to defeat the intent of the contract for the supply of Impact Standardisation Mark (ISM) stamps for Sh882 million.

“Investigations have established that the award of the contract to Madras Security Printers Private Ltd was marred with irregularities and illegalities,” the DPP says in court papers.

A probe by the Directorate of Criminal Investigations (DCI) found that the Kebs ISM stickers supplied by the Indian firm did not have a traceability system. They were also not tamper-proof as required by the contract — they are made using ordinary adhesive papers.

The stickers could and up to date can easily be duplicated by the owners of counterfeit products, thus creating a loophole to saturate the market with substandard goods that endangers safety of the consumers.

“Due to failure to comply with the terms of the contract, sub-standard goods have been recovered from the market and individuals subsequently charged with possession of counterfeit Kebs ISM stickers,” says the DPP.

The new stamps were supposed to fully contain entry of counterfeit and illicit goods that have caused the country to lose an estimated Sh100 billion annually.

It was intended that they would be traceable to Kebs, with the number of stamps issued strictly controlled by the standards body.

Further, the stamps were to be printed to certain international approved security specifications — be tamper-proof and not be duplicatable or easily photocopied. They were equally supposed to be easily distinguishable by the general public by use of the Kebs ISM scanner, a mobile phone application.

Related Content:  Alex Mutuku The 'Hacker' Breaks Silence From Jail To Reveal How He Was Framed By KRA's Big Thieves And Pleads For Help

While the scanner could easily read the details of a product, the importer, the Certificate of Conformity (COC) number, the country of origin and other relevant information, that data was not expected to be read from a duplicate, a photocopy or a counterfeit of the ISM stamp.

However, the substandard stamps could easily be duplicated, photocopied and still retain the security features on the copy that were readable by Kebs scanners.

In the long run, the ignorance and greed within the concerned authorities is coming to haunt the Economy in 2020 and now the National Assembly is expected to begin summoning concerned heads of departments at the Kenya Revenue Authority (KRA) and the Kenya Bureau of Standards (Kebs).

The chief executives of the firms suspected to be involved in the tax evasion that is said to be bleeding the country at least Sh10 billion per year are also to be summoned.

The matter reached the floor of the House two weeks ago as it emerged that a questionable consignment of empty bottles used for packaging alcoholic spirits had been received in the country with no corresponding bottle tops and stamps to be used to monitor tax collection on the drinks.

The chairperson of the National Assembly’s Committee on Finance and National Planning, Joseph Limo, said the request for a statement issued by Ruaraka MP T.J. Kajwang had been received for “urgent action”.

“Tax issues are very serious so we will deal with it very decisively and as soon as possible since the country is in need of every tax collectable now,” said Mr Limo, who is also the Kipkelion East MP.

The Ruaraka legislator had asked the committee to train its guns on some 10 companies he accused of playing a central role in the tax evasion.

Mr Kajwang alleges that the companies sourced some 200 million empty bottles from the Omani-based Pragati Glass Gulf and Nizwa Industrial Estate, and Tanzania-based Kioo Ltd. Most of the imports, he said, were made just before tax laws were amended to put in place a 25 per cent excise duty on imported glass bottles through the 2020 Business Laws (Amendment) Act.

The bottles, the MP said, were subsequently refilled with various brands of liquor, sealed with fake Kebs stickers and excise stamps and sold to unsuspecting customers, denying the government unspecified revenues.

Concerns over the large consignment of bottles with questionable use in the alcohol business is part of the reason the punitive tax on imported bottles was passed, despite protests from brewers and beverage dealers, who said local manufacturers cannot meet the demand.

Whereas bottle tops generally fall under the excise tax regimes, making them easy to account for during tax assessment, bottles have remained outside the excise tax radar. This has made it possible for fraudulent manufacturers to evade paying tax on alcohol once they have the fake stamps and bottles.

The House committee will look into the tax compliance history of the cited companies and seek to join the dots between the many bottles imported and bottle tops.

KRA officials will be required to outline the steps the agency has taken to stem tax evasion in the alcohol sector as well as present plans for full recovery of any lost revenue to deter the listed firms and others from engaging in such schemes.

Kebs officials are expected to explain the actions taken to ensure that the counterfeit goods are not sold to unsuspecting citizens.