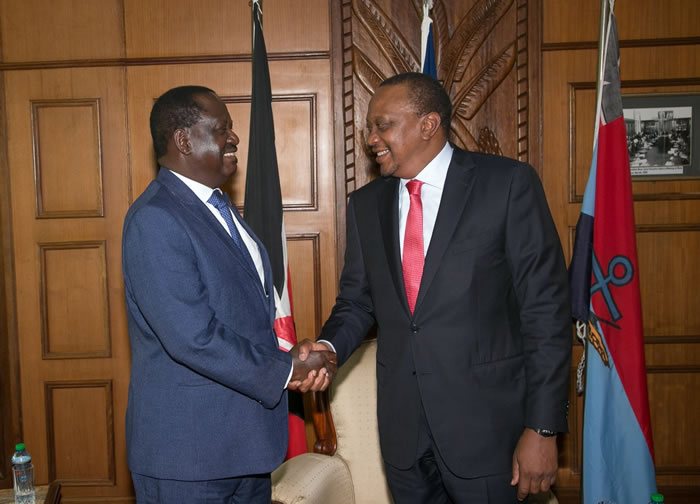 The Jubilee’s nominated MP has said that President Uhuru’s impeachment plans were underway.

With all the talk now resurfacing of what the handshake did, is doing or not doing lays unanswered questions.

If The handshake was the only thing that saved President Uhuru Kenyatta, who was planning the impeachment.

President Uhuru could have been impeached if it were not for his 'handshake' with opposition leader Raila Odinga – Nominated MP Maina Kamanda pic.twitter.com/JYiqPM1T1y

Was that the only thing that the Handshake was all about?

How exactly did the handshake save Uhuru’s regime?

So many people, some who had believed in change by revolution in order to reclaim Kenya, were made to look like a confused society.

The handshake portrayed our political carelessness. Self love political agendas. Political hopelessness. It left many Kenyans puzzled because it is a ‘Political magic.’

The Government of Kenya is still spending our taxes in running the same loosely thought out political cheat game.

Handshake was an idea to create a political auction. The masterminds failed in setting up the right time before its launching.

A rushed idea that is now being dangled  around the people to make it viable.

There’s still increased corruption. There’s a political calm down because the handshake slowed everything down. The handshake has made political demonstrations uncouth.

Also Read:FEMICIDE: How Nicholas Koskei Killed His Wife In Elementaita Lodge and Is Still Free

Kenyans are still getting divided by the current political cheat game. Tribal hatred is picking up and government running out of options.

Handshake or not. We want accountability, transparency and developments from the government.

We can’t be voting and supporting a government that has invested in killing our economy and auctioning our economy to neocolonialist with public debt.

Kenya Insights allows guest blogging, if you want to be published on Kenya’s most authoritative and accurate blog, have an expose, news TIPS, story angles, human interest stories, drop us an email on [email protected] or via Telegram
Related Topics:HandshakeMaina KamandaUhuru Kenyatta
Up Next